What random minor injuries have you had?

Well I have a new personal best today. I was getting my 5th wheel ready to hit the road tomorrow afternoon and caught the corner of one of the compartment doors with my ear. It ripped out a little flap. Bleeding like a stuck pig, I headed to urgent care and got 4 stitches in my ear. I never even thought that was possible.

That got me thinking it would be an interesting thread to read.

Currently walking around with my 3rd hernia… not too anxious to go under the knife. The first was when i was only a few months old, 2nd got patched up about 5 yrs ago. In no case can i recall a specific event where i felt something go wrong.

Ive had some bumps along the way doing construction for 25 years. But id have to say most of the worst random injuries has probably been fish hook related. My hands and fingers are fish hook magnets. Worst has been when the fishing line jerk wouldnt clear hook so i had to turn it and get tip and barb poked through a new hole so could cut barb off then fish it back through.

I was getting my 5th wheel ready

HOOT … bet most of us made that association.

Strangely, I do have an Iron Mike related injury to share.

I was an undergraduate in Upstate New York in the 80s. Matched up with the pre, during and post Mike Tyson/ Robin Givens years. I saw Mike often, and we had a whatsup/handshakes type aquaintanceship. I’m a frat boy. He always came to my parties. One year, I had nearly healed a sprained wrist, and I was too vain/pretty to wear my velcro cast thing with my party outfit.

Mike shows at the door and we do regular greetings. I shoulda been wearing that cast and I shouldn’t have shaken HIS hand that night. I always had a strong handshake and he knew it. It was sheer strength of conviction/manly pride that kept me off my knees.

No step show performances plus the velcro cast thing full time for the rest of the semester.

So, Iron Mike gave me the only handshake injury of my life.

Musta been 'round the summer of '65. Dad brings home this basket case minibike project, sans engine. With big eyes and a willingness to help, (tool gopher) Dad, younger brother and myself had it together in a few days. Granddad donated the engine, the infamous Briggs & Stratton. Engine bolted in, off with the muffler and a 3/4"X6" pipe nipple for the exhaust, we’re ready to test. Yee haw, we’re having fun now. We took turns riding it up and down the alley and in the vacant lots on the block. One of which was the spoils dump from the basement excavations. Those hills were great fun. At this point in the story, I need to mention the engine had a pull rope starter, not one of those fancy recoil kind. The rope had a place of honor on the handlebars. Riding the hills in the vacant lot and visions of Joe motocross in my young head, I felt a “tickle” on my right ankle. Reaching down to scratch, and drawing back a bloodied hand, I crashed. The notch for the rope took a clean slice in my ankle, centered perfectly between the tendon and ankle bone. Took 13 stitches to close up. Next thing you know, we had a fancy recoil starter on it.

I didn’t even think of mike Tyson. Hahaha. Good stuff.

The notch for the rope took a clean slice in my ankle,

Those bastards were sharp! Not surprised you didn’t feel the cut at first.

I had a stint as a greens keeper at a local country club when I was in my teens, we had a number of older approach and apron mowers with those type pull ropes. Was always a little extra mindful when starting and using them, just seemed like that hook could de-bone a finger or take it clean off if not careful…

Does “minor injury” have to be one that leaves a scar? If so I could probably write a book.

I have a mini bike story too. My grandparents had a farm that was a mile section and I spent a lot of my time there as a kid riding my Honda CT70 mini trail.
When I was in third grade, I was wide open going down a field road that was about a quarter of a mile long. There was a field of Green Giant contract corn and my grandfather had put a gate up across the road entering the field. I had never seen a gate up there before, didn’t see this one, and went right through a double strand barbed wire fence gate.

I crashed, ass over tea kettle of course.
The lower wire caught my right hand between the fingers which ended up needing six stitches.
The top wire caught me right across the throat, fortunately missing my esophagus and both arteries by no more than a prayer. That required 16 stitches, and I was taped from the bottom of my chin to both shoulders and my chest, so I couldn’t turn my head and tear out the stitches for 3 months

I have noticed most cats have a few nicks in their ears… It’s a sign of living a spirited life. 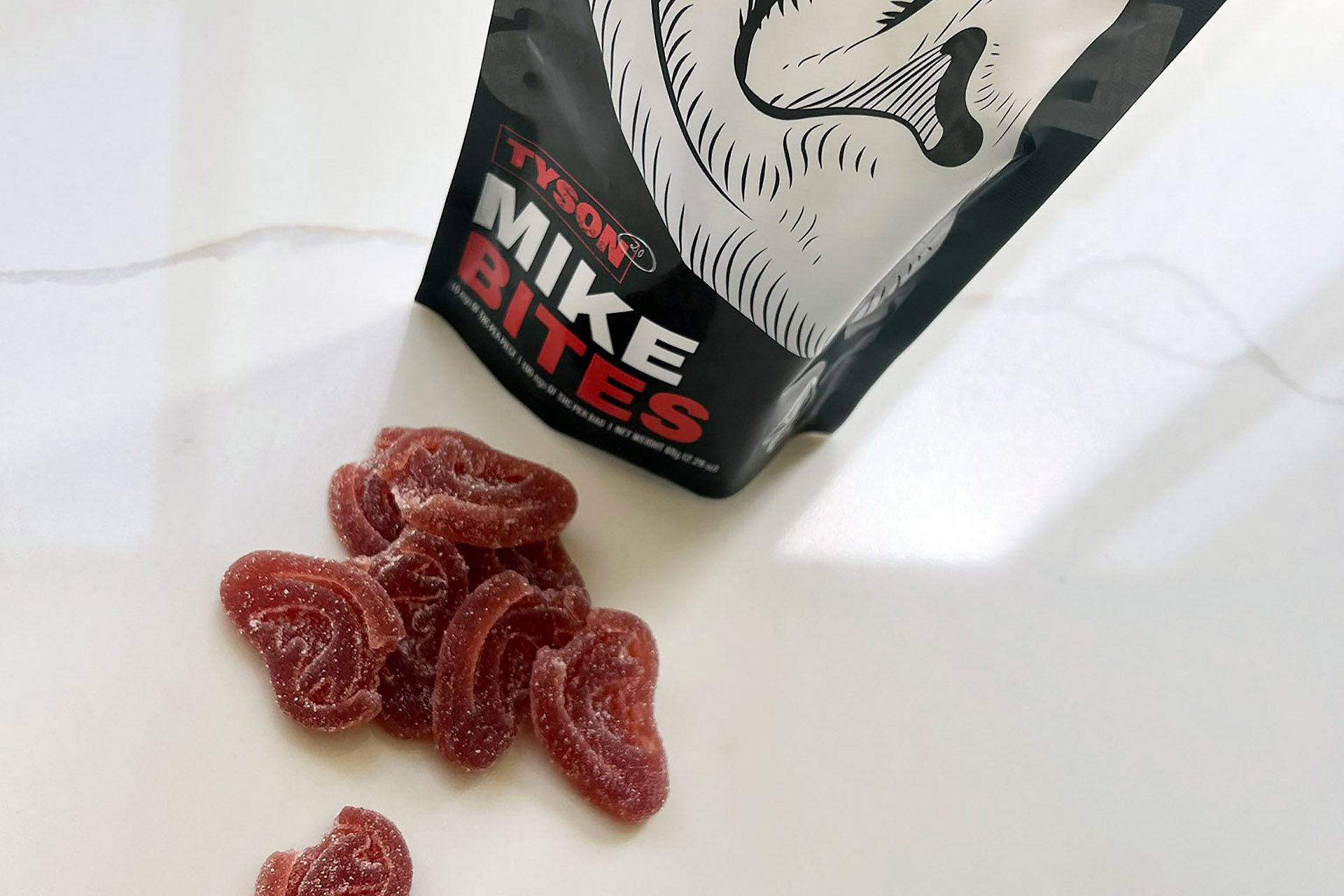 A few months after Mike Tyson launched his weed brand, Tyson 2.0 has released its latest product. Mike Bites pay homage to the former boxer's controversial career with ear-shaped gummies. The cannabis-infused chews are a nod to the infamous moment...

Made through first two years of kung flu. January 2022 covid and poison ivy.

Several years ago I was trying to loosen a bolt from a water pump with a breaker bar. Well, the bolt snapped as I was pulling up on it. Being a dummy, I had my face directly in front of the breaker bar looking down at the water pump. The bar hit me directly above my right eye brow and blood started pouring down my face. I still have a small scar from the incident.

I was stationed in Key Largo Fl. and helping a friend work on his dock. Driving 16 penny galvanized nails all day. (prior to deck screws and battery drills) I partially missed hitting a nail and felt a very light hit in my eye. No pain no vision loss nothing.
The next morning my eye continuously watered and was swelling.

Went to the local eye Doctor and he told me it was out of his league and made me a emergency appointment in Homestead. Just north 20 30 miles or so.

Here I go and end up in surgery having a piece of nail removed that had hit the very center of my eye.

All went well except the nurse accidentally dilated the wrong eye and ended up having to do both eyes.

Hear I go driving home with one eye totally covered with a pair of very dark glasses on.

I made it maybe 8 miles to the end of the Fl turnpike extension going onto US 1 Southbound. Still cussing that nurse quietly.

I Can’t go no farther and was LUCKY to pull right into the Last Chance Bar. It was a major landmark at the time . I had to get the bar tender to dial my number. And explain that I wasn’t drunk… YET.

But it was a good trip because by the time friends got up there to get me and my truck I was half s#!t faced.

I took a HR Pardner 12ga shotgun and shortened the barrel. Then I cut and shaped the the stock.
When I went to shoot, the recoil caused the release lever to cut a square hole in the web of my thumb.
I could see the tendons but it bled very little. 4 stitches and couldn’t shoot for 4 weeks.

Note: I have since replaced the stock with full size stock.

You gotta’ be kidding. At my age there is not enough room left on the internet to list mine. I have found that over the years self-inflicted seem to be the worst.

At my age there is not enough room left on the internet to list mine.

You are blessed Burt.