What New Parts Do You Want To See Us Make Next?!

YES , it would be a beautiful thing, I thought about that a time or two myself.

I’m pleased to say my range trip was a complete and total success! 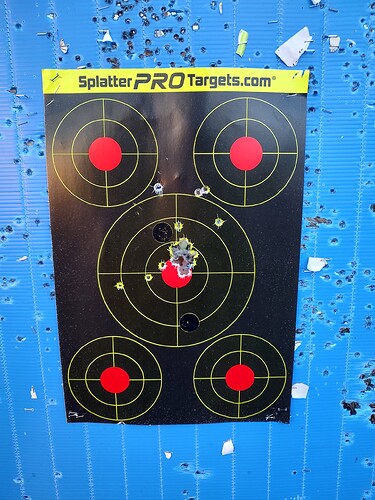 This is obviously after sighting. 25 yards. That big hole? 30 rounds. The others around the outside? A quick 3 round snap from the shoulder.

I used a bench rest for the sighting a glorious hole manufacturing.

Then I decided to try at 50 yards: 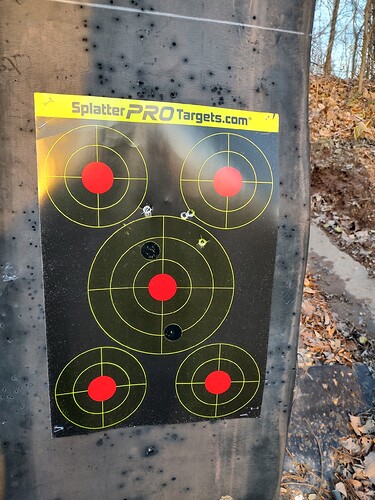 Shot high. I’m sure it’s because the mount is so high. It’s kinda intentional because at 100 it should end up close to the center.

Now that scatter? I have to blame the caliber and cheap bulk ammo for that. I don’t miss from the bench. Ever. 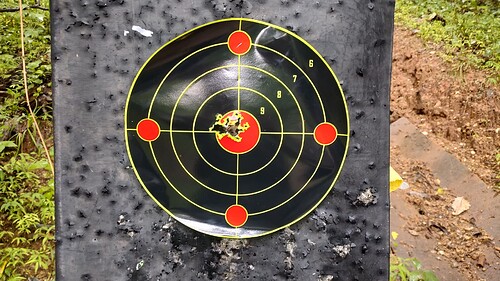 You get the point.

So after proving it works I decided to have some fun. 66 rounds, 3 round snaps from the shoulder fired under a second: 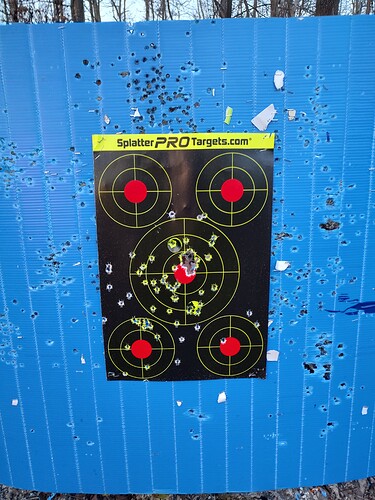 Ok maybe I need to work on that a bit… But oh boy is it fun!

Eye relief? Zero issues. In fact I probably could have moved back an inch and still had a good view. I’m 6’ tall with wide shoulders and have the stock adjusted all the way short. I like to hug my gun when I shoot. It just feels comforting. I get all warm and fuzzy when I smell spent shells. It centers me like playing with a puppy or kitten.

Mods: I basically went to MCarbo and bought one of everything except the brake and tube cover. Trigger, guard, bushing… Everything.

It’s a winner now! If you’ve been toying with the idea just stop screwing around and do it. You won’t regret it.

Did you check parallax? It appears it may be there when you’re shouldering.

To check: support it on the bench; get it sighted on target; them move your eye around a little bit. If parallax is haunting you, you’ll see point of aim shifting as your eye moves.

This is why I asked about a possible “chin” weld earlier. It will be easy to sight for a specific range from the bench where your eye position is relatively easy to repeat consistently. But it looks to be a bear to accomplish off hand.

I’ll check next time I’m at my outdoor range. Going to a short 25 yards range tomorrow but I doubt that’ll tell me much.

That said I’m pretty consistent when I hold a rifle.

Parallax is a function of the equipment not the placement. I know it’s a cheap prism scope. It’s not a $500 unit. I wouldn’t put a $500 scope on this gun.

Ok, fine, I probably would but my wife wouldn’t like it.

Regardless I don’t think the scope or setup is the problem. It’s just a 25 yard setup. It’s a 9mm. Not a .308 round. It’s not even something for self defense. It’s not a hunting rifle. It’s not a battle rifle. It’s a short range rifle that’s really stinking fun to shoot. I just wanted to make it more fun. Mission accomplished there.

If I wanted a highly accurate rifle I’d shoot one of these. 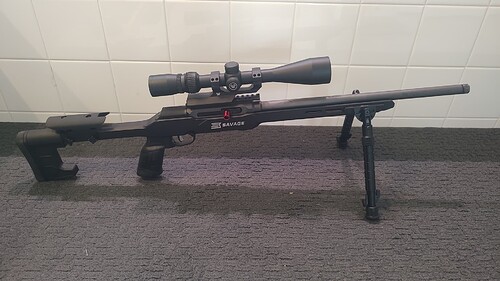 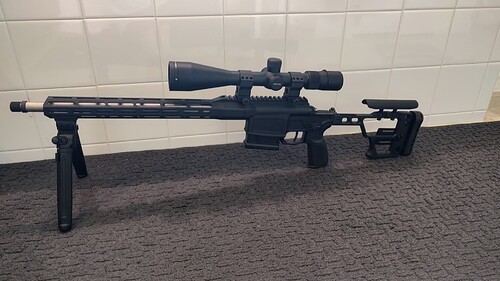 Those are my precision rifles. Those put holes through holes.

The Savage is a competition.22lr. the big one is a Sig Cross .308. both have Vortex scopes. Obviously I put the big bucks into the big gun. A 9mm can never touch it. Heck I doubt a 9mm could ever be as precise as that .22lr in short range shooting. It’s just not designed for it

Checked the parallax and it’s definitely there but, again, I’m consistent in my check weld so it’s not a big deal for me.

That said at the range today I got to really play with it. Zeroing it for 25 yards means anything less and it’s definitely hitting way low with the way the scope mounted.

At the end of my hour with my buddy I got the bright idea that I’d swap my laser/light combo from my pistol to my S2K and I think it’s staying right there! I literally just slapped it on and it was somehow dead zero. So now I have three ways to waste a lot of ammo with this gun very quickly if I want to. Of the three the laser is actually the fastest and most accurate way to aquire targets. From experience it’s actually visible out to about 25 yards in full sun and way longer as it gets dimmer.

When I got done my buddy was already looking up pricing on a new S2K. I told him to buy it, shoot it once, and then just send it in to MCarbo to have the whole thing “fixed” like mine (he won’t do it himself like I did).

Final conclusion: the mounting method works to use a prism scope with 3.5" of eye relief. Try to find one with a lower profile though (I already had this laying around so that’s why I used it). Ideally one with a quick release, low profile, 3.5" eye relief, and minimal parallax.

Justake sure you have several large clips because you’re gonna love shooting it! Way more fun than an AR to shoot even!

I’m now a huge convert. I’ll be bringing it to the range probably every time I go now. It’s just that much fun

Id rather see a .45 ACP sub2k. I think the 10mm would be too jumpy, and probably too high of a pressure for the sub’s flimsy chassis.

How about some nice ar (15 & 10) adjustable buffers and flat wire springs? Would be nice to go with the trigger spring kit and Pmag springs

Metal pic rail replacement set for the Hi Point carbine. Especially that forward rail at the underside of the muzzle where a light mounts. That plastic pic rail bows. A Metal replacement is certainly a wish list item.

Have you considered a clip to hold an additional magazine? Maybe a M-Loc attachment?

Welcome @SD-Ray thats been suggested many times. And ive seen a couple threads where members started development themselves. Try the search box, or i will look them up and post what i can remember.

Thx, HandyDave…so that’s how easy it is to change the sub 2000 frontsight? Just loosening a screw and removing the Kel Tec sight? Or would you recommend against replacing it for now because I have a lot of upgrades coming from M*Carbo and I’ll be dealing with all those upgrades.

Have you considered a clip to hold an additional magazine? Maybe a M-Loc attachment?

As @Stircrayzy noted, several members have hacked something together. Basically take a Glock mag holder and attach it to a pic riser or M-Loc and then to the firearm. The problem is deciding what real estate you will give up while still maintaining foldability.

would you recommend against replacing it for now

I think the Red Lion front sight is overpriced but it is SOOOOO much better that I would buy it again.

A better trigger for a Beretta APX A1 Carry would be nice. Make it right and you should clean up!

There’s another option to consider. My bullpup mag actually clicks onto the bottom rail and can act as a foregrip. That said I can’t use it that way because it’s too tight to actually get on and off quickly enough to make it worth a darn. …but design a foregrip with a mag release for the Glock 17 and you have a winner! Imagine being able to swap them back and forth quickly. Edit: after reading the reviews the concept is solid but the execution sucks. Make it lock in like a normal foregri…