Mods, please delete this topic if over the line.

So, Tannerite. Keeping in mind this is an open forum, who is the Tannerite SME (subject matter expert)? I know that force = mass X acceleration, but am interested to know what rounds/weapons people have used to set off a 1 pound mass of Tannerite. What fun things do I need to know about using it to remove, say, a four-foot tall, 12-inch diameter tree stump?

I’ve seen (and laughed at) the video of the guy packing the refrigerator full of the stuff, hiding behind a tree and STILL almost get collected by the fridge door. Obviously want to avoid THOSE kinds of experiences. But, I’m one of the kids who used his Dad’s best hammer to smack a roll of caps (those were the days!) rather than firing one at a time through my Roy Rogers cap gun. More noise = more fun.

I know it’s a velocity thing to detonate it. I don’t believe 9mm will do anything, or most common pistol rounds. But I’ve seen first hand .17HMR make it go boom. Otherwise I’ve always just used 5.56. My advise for taking a tree/stump down is start with a pound. If that doesn’t work, bump it up. Keep your distance, that s#!t is no joke

I’ve seen (and laughed at) the video of the guy packing the refrigerator full of the stuff, hiding behind a tree and STILL almost get collected by the fridge door

You ever see this one? 164 pounds of tannerite vs a barn 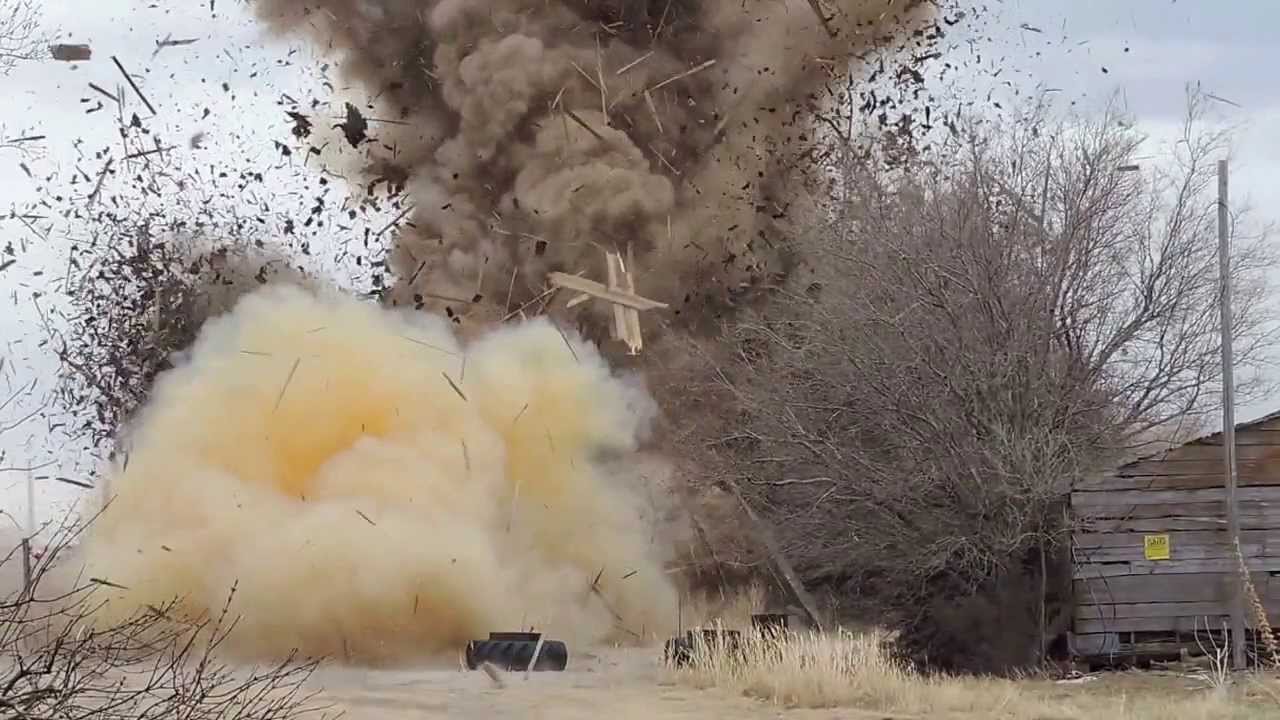 SF has two combat engineers per detachment. In my day, they needed to calculate how much C4 needed to be used on any given target. The formulae usually contained “p” as a factor. When asked what “p” stood for, they’d smile and say, “Plenty.”

I know they make different varieties as well. They have some for higher power centerfire calibers. And they have some made for rimfire type calibers. They used to have some great texas video’s on the you tube of hog removal by tannerite. As far as stump removal try a little and if need be try alot. Shooting exploding targets and getting work done at same time sounds like a fun day either way.
Edit: i found a hog removal video still on you tube. Controlling Feral Hogs with Tannerite - YouTube

Yup, I remember the roll of caps thing and I’m sure that’s part of the reason I can’t hear worth a damn to this day. Loved that smell tho….

I chose mortars as my basic MOS because of the noises and explosions. Wasn’t disappointed.

For us simple folks, it sounds like add more red to the white, to increase the volatility of the mix. Right or wrong?

Pretty much. You would want to increase the “shock sensitivity” to allow the use of lower, slower calibers.