With all the .22lr (10/22)and 22WMR (PMR30) shooting I have been doing lately I have experienced several failure to extract spent cases from the breach on the 10/22 and the PMR30. From what I can see the failure to feed a new round has been caused by the spent case remaining in the breach. seems the issue could be the extractor is not pulling the case to the ejector.

I might be wrong here and looking for some feedback.

That seems like a plausible idea, also how is the extractor shapped? Worn out or rounded?

I would say replace the extractor with the one from Volquartsen. And while you’re at it get their firing pin also. You can usually find them in a kit together for about $35. I put these on my 10/22 bolt, and have yet to have an issue since. Literally 0, with any kind of ammo.

how is the extractor shapped? Worn out or rounded?

As you all probably know I like to tinker with things. I use one of these to keep track.

The interesting thing isI have a 10/22 take down that I was shooting over the weekend and had NO issues so the suggestions from ALL is driving me forward and thanks !!!

Maybe the higher power ammo is screwing with me.

The PMR30 would fire then fail to extract RIGHT OUR OF THE box using A22 ammo and CCI MaxiMag 40gr 1875 ammo. after a few failures I started to take notes. I noticed the spent case was laying between the magazine and in the breach at top of the empty magazine.
I took a spent case put it in the camber and cycled the slide, slow manualy. The case STOPPED at the front of the magazine.
I sent it back to KelTec and while writing this just notified it is coming back to me.

More to come later. Thanks for everyone help !

Have you checked the chamber and cleaned it? Some ammo is dirtier than others…and fouls the chamber making it too tight to extract properly.
I had the same issue when my take down was new and I tried a 500 rd. box of dirty ammo…wasn’t CCI or Aguila.
I did replace the extractor/spring with the Volquartzen …cheap assurance and no problems extracting with the ammo I use.

How many rounds total fired on the guns?

Have you checked the chamber and cleaned it?

OH yes ! On the PMR30, I could insert spent case into chamber, point muzzle up and it FALLS OUT to the front of the magazine then stops. That is what lead me to thinking the spring or the shape of the extractors were at fault. I am waiting for pistol to get back and load it with the MCarbo FULL kit ASAP.

Have already sent suggested mods to MCarbo administration for springs or updated extractors.

With the info I am getting, going to look that way. NO DOUBT !!!

Jewelers loop ! Micros TOO expensive for this work.

Ammo used is All CCI. Either A22 or MAXI MAG 1875fps ammo.
I have other ammo that I will only use sparingly in my Savage A22 because of CRAP. thank God I only bought single boxes of it. After shooting CAT A1 in December 2020or 2021 I found the extractor pin was creeping up out of the bolt.

Here is the interesting thing about the A22 gun. I was having lots of brass dust filling the breach
, coating the bolt and falling into the mags. See my entry to the December.

Sent it back to Savage THEY DID THEIR THING AND EVER SINCE,NO BRASS DUST and absolute reliability. After around 200 rounds.

More to come , I need a break.! I have been going for 16 hours. Have to talk about in relation to 10/22 ammo compared today. LAX 40gr 1060fps and Remington 36gr golden bullets over on the buying ammo thread. Nighty night !!!

How many rounds total fired on the guns?

The PMR30 I would say maybe 100. I got so frustrated with it I disassembled the slide and buffed the extractors. While I had it all apart I buffed the slide where the hammer rides and radiused the top edge of the hammer and that reduced the collision between the bottom of the rear of the slide making a lot smoother transition of hammer/slide. Took it back out for a run and still NO GOOD. KelTec sent me a lable ($25.00) I sent it back and It is now on the way back to me. Maybe get it by the weekend.

Number of rounds in 10/22. shot it over the years maybe 400, the past few weeks close to 800.
Winter is slow for me so I have been playing at the range. It is only 3 miles from me, BAD THING

By the way I have been checking out the Volquartsen and KIDD sites. @Jperr Thanks for the kick in the ASS.

OK to all of you that have helped my get off my ass, THANKS just ordered from KIDD the firing pin/spring, and extractor with spring not only for my long gun but my 10/22 take down also.
Thanks for helping me spend more time with my guns !!!

, now I want a barrel

Have you done any bolt/receiver inspection and polishing? My take-down bolt/receiver had a terrible scratchy feel when cycling…so I polished it…and it helped.

I have two 10/22’s. One from 1985 and a takedown from 2016. The 85 carbine version is very smooth and quiet when manually cycling the charging handle. No issues. The 2016 takedown (~2,500 rds.) has a very rough/scratchy feel when manually cycling…almost like it’s touching the recoil spring. I’m wondering if it’s out of spec from the factory?

Going to look closer tomorrow and might do a polishing. Anyone had to do the polishing? And did it help? All ideas appreciated. I’m not ready …

Ruger OEM extractor after ~ 2,500 rds…next to the new Volquartsen:

Volquartsen makes great stuff. I also replaced a Ruger spring/extractor. Best upgrade you can make on a 22LR

Extra velocity = Extra wear. I’ve been sticking to the Aquila Super Extra or CCI Mini Mags.
For my range distance it makes more sense and cost about half as much as Stingers…so I can buy twice as much.

I’ve been sticking to the Aquila Super Extra or CCI Mini Mags.

LAX came out with their new 22lr

Even though I was having extractor problems was able to do this group.of 5.

Any HV rounds I shoot in my bolt action.

With the PMR 30 I polished the chamber until is was shiny smooth. Also replaced the feed ramp with the one from MCarbo and polished it as well.

@Turmeric Any pics of the OEM extractor? …Did you pin point the problem?

Any pics of the OEM extractor?

Not yet, USPS to be dropping the KIDD’s today
I did a deep clean! I was blown away by how absolutely filthy the extractors had gotten.
took the bolt and trigger group apart. on both 10/22’s.

After I put the take down back together I realized I should have polished the sear/hammer interface SO I did on the long gun
!

Have only shot the take down, so I could sight in the new Primary Arms SLx dot/
The SEEALL sight died so I installed the smallest Dot I could find so the rear of the gun would still fit in the Ryher bag.
Not one FTF FTEx FTE.
SEEALL and dot height compared

Since I have to open the trigger group for the take down decided to get one of these for both guns, 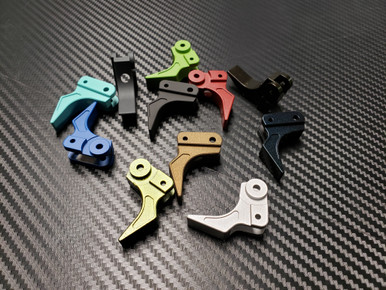 DetailsThis red dot sight is part of our SLx optics line. SLx optics built our reputation for innovation, reliability, and value. All SLx optics undergo rigorous field-testing during development to best serve you in any environment.The Primary Arms...

The extractors arrived . The old ones where not that bad. Not really alot of out of this gun, and into the trigger group and polished.

Have you done any bolt/receiver inspection and polishing? My take-down bolt/receiver had a terrible scratchy feel when cycling…so I polished it…and it helped.

I never noticed that but after your mention I looked into mine. I had the same thong with take down but not long gun.

I have just replaced my firing pin in my long gun. The video I watched said make sure the retaining pin was set low on the right side of bolt.

Sure enough the retaining pin on the take down was being rubbed by the spring on the bolt lever.
Do not SET it too far or it will stick out the other side
.