I was surprised today after shooting my Springfield Armory XDM-9 with factory iron sights. Shot targets at 10yds and 15yds on this “mini-stage” that I set up. Nothing fancy, just 3 in a row at 10yds and 1 at 15 yds about in the middle of the 3. I wanted to learn/practice transitioning from target to target. 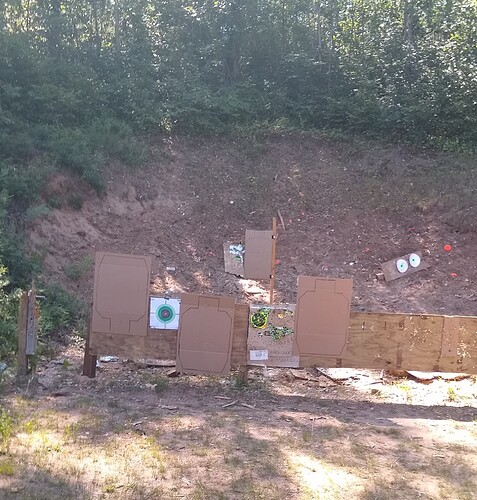 Yea, the one on the left is hanging upside down but that was the least of my problems. I wanted to shoot 1 round in each target, far left then far right then rear center then front center. I was going for head shots. When I got up close to score my hits, I found that my hits on the rear center target were 8 to 10 inches low. I was puzzled because I recently looked at 9mm bullet drop ballistics and found it to be a reasonably flat trajectory.

A guy at the range suggested testing by shooting off a support rather than off hand. That was not it. Then he asked about my sight picture / target alignment. I was using a “6 o’clock” hold (front bead just under my aim point.) I switched to a “hold on” style (cover the aim point with the front bead) and that seemed to help matters although not completely. I went from consistently low to one almost right on and couple others 3-4 inches high.

I wasn’t seeing any problems with the 10yd targets only the 15yd one was off. Now that I think about it, there was about a 2 foot change in ground elevation. The rear target higher in the air than the near targets. Later, at home, I was practicing the various “point of aim” techniques and found that small head movements, just up or down a bit, would get the sights out of alignment. Without a stock attached to the gun to establish a cheek weld, it seems like it is going to be very hard to get a consistent aim?

You may want to consider attaching a laser to your pistol for training. You would be amazed how much wobble is invisible through the sights but obvious at the laser dot.

I use a laser training aid. Looks like a pistol, to work on my steadiness and smooth trigger pull. It also works for point shooting. There are many models to choose from, I made mine out of junk, so I can’t recommend a commercial unit by personal testament.

I use a laser trainer that chambers like a round. When striked, it makes a flash and it can be recorded by a phone and software.
That showed me that the iron sights on my pistols are mediocrely adjusted.

Most 9s are sighted in to climb to 25m then head back towards the earth. In theory anyway. The sights are so very close to the center of bore, there would not be a discernible convergence between the two axis. They basically look parallel. I shoot a Lehigh Defense 120gr Extreme Defense in 45SMC. Has about the same trajectory as your 9. Recoil, wind and age all have an effect on my target shooting. I practice with a 10m Olympic pellet pistol to keep my eye on the front sight.

I have two xdms. Subcomact and osp. I was consistent but struggling to hit aim point. A fellow shooter also with xdm suggested trigger upgrade. Which i havent done. I practiced until, consistest grip and finger movement. I have put springfield hex dragonfly on osp. But havent shot it enough.

Thanks all for the info and tips. Obvious to me now, I need more practice. And practice at different yardages. The owner’s manual says:

xdm 9 poa poi588×290 31 KB
I had my aim point both too high and too low compared to this sight picture. And shooter deviation from a steady hold and good follow thru is gonna exaggerate the problem.

Laser training tools sound good to me. And some serious practice - both dry and live fire are in order. Plan to hit the range tomorrow at least for a short time and this is at the top of my list.

Stopped at the range today for a quickie. Confirmed factory recommendations work at 10 yds. Found 15 yds to be more difficult but correctable (maybe?). Went to 25yds and really, no, really: 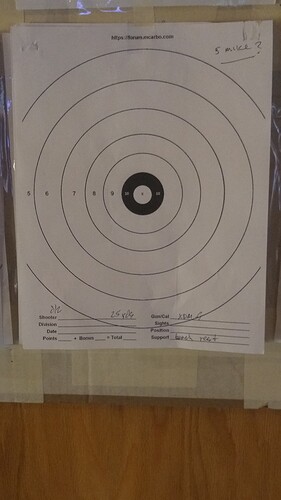 I held dead center, held up a little, then lower a bit, nada, held top of target, then bottom of target - unbelievable - Five Mikes!!

Ran out of time and it started to rain. Next time, I will be armed with 36 inch craft paper!

Some pistols are finicky about ammo.

25 yards for any pistol is pretty tough challenge. And in my opinion unrealistic distance that would be needed with a pistol. Speacially with edc type pistols with iron sights id say 10 15 yards would probably be max for good grouping and training. Even then most cases of having to use carry weapon for real is up close encounters. Its still fun pratice though to see just how far you can stretch your shot accuracy but wouldnt worry to much or feel to bad about missing a 25 yard shot with a somewhat compact pistol.

@HandyDave, thanks for the good tips. I tend to get crazy ideas in my head. Two weeks ago, I watched a USPSA match at a local club and got interested in it. So I made some psa targets, set up at my range, and soon my dreams were shattered! And I didn’t even try drawing from a holster and moving around. My course of fire was designed to do some simple target transitions at a couple different yardages. I did use a shot timer to get my total string time and worked in a mag change.

At the match I saw, they were running official sanctioned stages and all kinds of targets and yardages. So, “monkey see - monkey do” of course.

What got me wondering was having just run a couple 9 mm loads thru the ballistic calculator I use and thus expecting a fairly flat trajectory, I thought that I could just use a good general aim and hit the fairly large A scoring zones. Oh yea, I was very wrong.

The guys suggesting that I try a laser sight to see in detail how far off you can be with even very small movements know that is going to show how the distance magnifies the error.

In the end, you are correct: 25 yards is not a “normal” pistol shot. Like I say, I get these crazy ideas and usually end up learning something from them. And me practicing with 9 mm is going to be a financial experience as well as a learning one. Lol. Appreciate your comments - keep them coming!

We used to have to qualify with the standard torso plastic pop up targets out to 25m in the MP corp. trouble was, the range was set up for 9mm and we were issued 45s. There were many more magazine changes for us, but with practice and study, we could keep up with those pesky 9mm. Even when the target was worn out, our 45s would hit enough material to make them drop. You can get there, my friend. Practice, persistence, ammunition selection, and a range buddy spotting for you, can all add up to making 25yds a consistent hit. Keep seeking and learning, your goal is achievable. 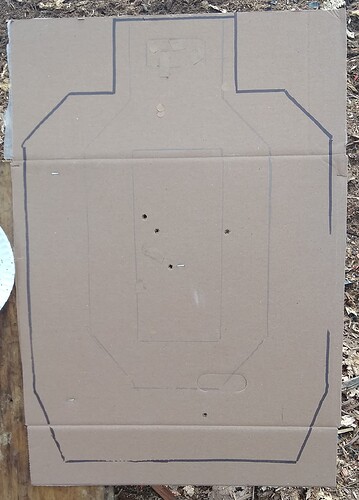 I did a lot better using the factory point of aim with factory sights - lol - makes sense. Also, more concentration. After these, I did some dry fire and could see that I am moving usually a bit low and left after the click (flinching.)

For comparason (and ego soothing), I shot a few groups with the Buck Mark - not the best one but my favorite because I got a bullseye: 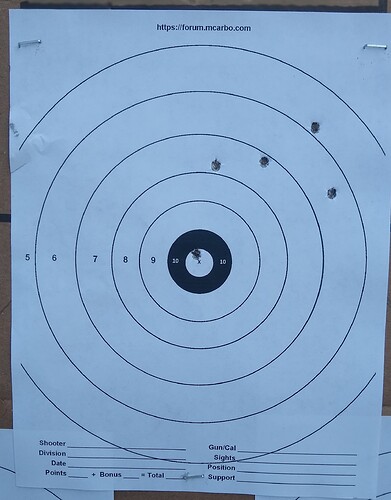 Wise words. Most people shoot a good target and don’t practice anymore. Muscle memory is required for consistent good shooting. The only way to keep that muscle memory is regular practice. I have seen my own shooting skills diminish in the last couple years because I am not shooting near as much as I did before the price of ammo got so high.
I need to invest in one of those electronic targets and training pistols so I can get more practice without spending 100’s of dollars every month on ammo practicing.

With proper skills, a compact should easily be on a 8" target at 25 yards, and a full size should be on an 8" at 50 yards. Micros on 8" @15 yards. Off hand. Closing your eyes, anticipation of recoil, poor trigger control, etc is not the guns fault! I would shoot 0 mikes with a HK usp compact at 105 ft on a uspa target, classifier, freestyle. And I’m not an expert by any means. C shooter at best.
Of course that’s just my arrogant opinion.

With or without a tripod? Lol. That is far more skill than needed for any IDPA match. Especially when shooting a compact classifier stage. If you can also do that quickly you should compete.

Seriously. You would do very well.

This is an IDPA stage I shot in the past. The first target is at about 5 yards. Then the next 5 targets were staggered from 25 yards down to 7 yards. IDPA rules biggest threat first which means the first one you see when pieing cover/concealment… that is the target at 25 yards. This was with my stock Glock 17, iron sites, the rules only allowed 6 in the first then 10 rounds each in a mag after that, and the standard IDPA 8" bullseye… that you cannot see at more than 3 yards. You just gotta know where center mass is on the target. I forget my score, but bet it wasn’t very good.
I watch these to learn how to improve. Here… definitely a terrible stance for shooting around cover. My right foot should have been been my lead foot. I got crossed up (and… 1,000 other mistakes). 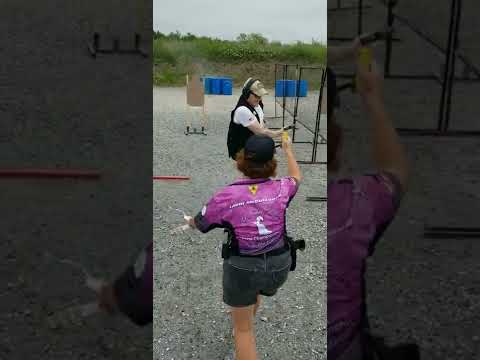 Ipsc classifiers may have a few with a little more challenging distance.
Couple long ones, 4 bill drill comes to mind but don’t have a good memory.
Shot many ipsc matches with a hk usp compact before going with revolver and glock 24
No tripod.
Hit a steel 12x18 with iron sight revolver couple times at 215 yards off hand at the Elmer Keith Shoot couple months back, but missed a few times also. Not bragging, just pointing out most guns are capable of far better accuracy and distance then folks think.

I have seen a few folks shooting pistols at long range and I am always impressed. With irons or red dots.

I strictly practice the way I shoot… for competition or a defensive situation. In both cases 25 yards is all I will likely need.

At my gun club we have 4 indoor 100 yard stations. It’s against the club’s rules to shoot a pistol in that entire bay. Only PCC and carbines are allowed. Because at 100 yards 99% of folks can’t even hit the backstop, much less an 8" target. 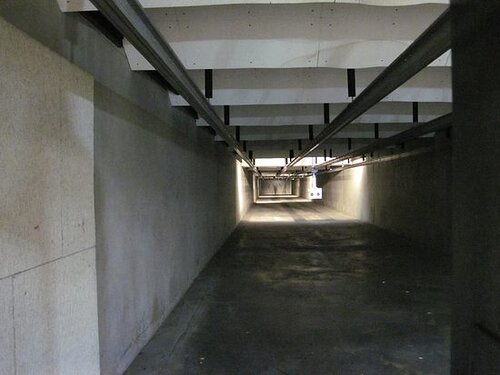 Wish I had one of those carbine guns. I lost them all in the… the thing. You know, the thing.

EDIT: The target in the image above is at 25 yards. 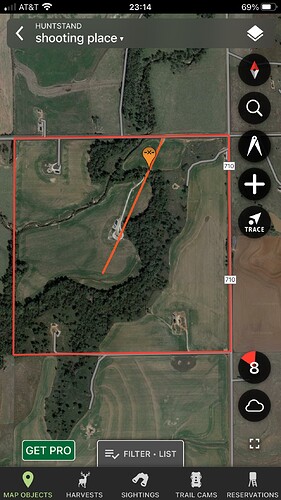 image1242×2208 243 KB
Tree line at 135yd, pump jack at 430yd and furthest tree line at 660yd. With practice man size targets can be hit at the 135yd line with pistols with practice. Easier with a stock and or optics. AR pistols (300BLK) and rifled barreled shotguns make it easy. The pump jack and end stop is where the k98 with Lyman peep gets it’s work.
5 Likes
next page →