PSA Getting Into The 5.7 Game

Comes with two 23 round mags that will fit Ruger 5.7 and Glock sights.
Supposedly it will list for $500, but I’m not certain of this. We’ll see.

I wish 5.7 ammo wasn’t so expensive. I’d like to try one out, but I know I’m not in the market for a 5.7 yet. Maybe with gained popularity more ammo manufacturers will make 5.7 and drive the price down

The ballistics of the 5.7 are interesting. Way better than 9mm. The guns are limited and ammo is pricey. I hate the idea of another caliber I have to stockpile. I feel the same way about the 30 Super Carry. It’s clearly better than the 380, but is the pain of getting rid of my 380’s and ammo worth starting over? At this time, no.

Changing calibers is like getting divorced. The advantages often equal the consequences.

The 5.7 has the velocity to penetrate kevlar vests. Good for combat, not good news for law enforcement personnel. It’s more accurate and shoots longer and flatter than 9mm. All around better.

I hear what you’re saying. My advantage is I’ve only been in the gun game a few years. If I get into 5.7, it would most likely be a range toy. I wouldn’t have to replace a caliber, since my only 2 pistol calibers I’m invested in is 9mm and 10mm. They aren’t going away for me lol. But I won’t consider 5.7 unless ammo prices come down.

I am 100% going to buy a 5.7 pistol, just deciding on which model to get. I was dead set on waiting for the PSA because of price and the extra capacity vs Ruger and FN but I keep going back and forth. The prices are coming down on the guns and with PSA now going to producing the rounds the price should come down on them soon.

The price on the FN has been steadily coming down but it still is not reasonable enough to justify a purchase just yet. The gap between the PSA and Ruger is getting close enough to make it a tough choice and at this moment I’m leaning towards Ruger. I actually was was watching a Ruger for $599 but it sold out before I could pull the trigger.

I will eventually give in to temptation. But two bucks each round is a lot of moola. It costs $200 to break in a new 5.7 pistol. Short supply and a lot of ammo sellers limit how much you can buy. I’m going to hold for a while.

The 5.7 has the velocity to penetrate kevlar vests.

This may help a bit. A few 5.7 rounds from pistol and rifle vs. body armor and ballistic helmet: Every time the 5.7x28mm cartridge comes up in a discussion, you always hear someone talk about its ability to penetrate a row of Abrams tanks and then continue on into the next county, but there is not a lot of information out there to prove the...

Here are some mean little SS190 rounds. These rounds are restricted for sale to government bodies and law enforcement agencies by FN, which is why I conscripted my friend Chris to help with the test. Chris is an Army reservist, an FFL/SOT

Well… that capability is useless for average Joe that doesn’t really want to become a felon.

Interesting subject. One of the design specs for the 5.7x28 was to be able to penetrate Russian body armor. The civilian ammo keeps the average dumbass from obtaining the body armor piercing variety. But someone more organized… bad guys in the drug trade or terrorists aren’t buying ammo at Cabelas. Bad guys will get their hands on black tip. If 330 tons of cocaine, 20 tons of heroin, and 110 tons or meth can be smuggled into the US every year, I think a few cases of SS190 can find its way in too.

To make things even more muddy, I read that the (198LF) green tip velocity is 2600 ft/s. Wow. It’s supposed to be LE/Mil only but civilians can buy it. That’s substantially higher velocity than the hottest 9mm +P loads.

Anyway… I’m reminded of the ‘green tip’ controversy going back a few years. 2015 or thereabout. Anything considered a ‘penetrator’ was banned then the ATF reversed the decision sometime later. One of the justifications was M855 or anything with a steel shank potentially could defeat body armor and therefore must be banned from civilian use. True, not true… whatever. I remember back then CSI wannabes doing their own back yard tests on vests and publishing them on UBoob like they were scientists or ballistics experts. Now that’s repeating with 5.7x28. I wish somebody would do it right and shoot a turkey wearing a denim jacket to truly evaluate the performance of this round. Then all would be settled.

It’s supposed to be LE/Mil only but civilians can buy it.

Personally I don’t want to be in a position that I have explain my choice of ammo to a federal agent.

Highest live seen in a pistol is around 2100fps

I have no knowledge into the specs for .22TCM, yet…

Personally I don’t want to be in a position

Agree 100%. For me, it’s kind of like travel. When I started traveling for business I always packed too much s#!t. Over time I got better and smarter about what to bring with me. What was needed vs. what I might need. I was hauling around stuff I never used. When it comes to self defense, I have learned to think about what’s necessary vs. what’s optional. And how to be smarter and better skilled in avoiding or fighting my way out of situation. Not how much firepower I can carry. I can stop a bad guy with a 22, 380 or even better a 9mm. In practice and in the hands of a well trained person, they are all more than effective. A faster bullet won’t make me safer.

Here you go 92 cents a round no more excuses 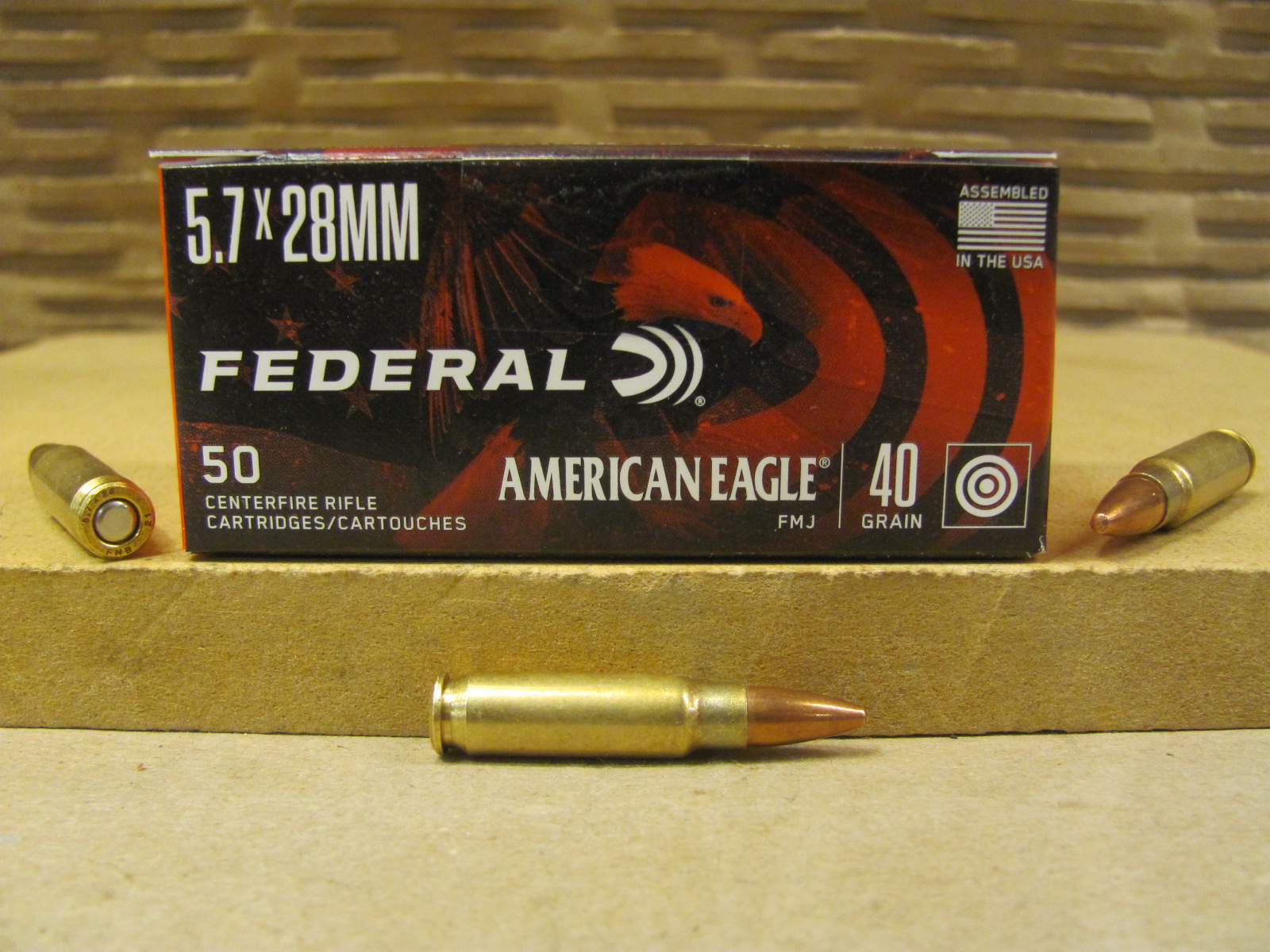 SGAmmo.com, bulk ammo sold by the case at the best lowest prices for sale anywhere online

The round is fun to shoot. Its flat shooting out to 200 yards. The FN Bull Pup PS90 is a riot to shoot with the 50 round mag. The only problem is the cost of ammo. The red box of ammo is the LE only round and is available on Gun Broker for $50-$100 per 50 rounds. The blue box ammo is not much better in terms of cost.

Its flat shooting out to 200 yards.

I don’t know what you mean by “flat”, but this is what manufacturer says about it, drops almost 4" at 100 yards, doesn’t even go to 200, because it makes no sense to them:
Buy American Eagle Handgun for USD 41.99 | Federal Ammunition (federalpremium.com)

@Dred And that Sir is why Some of Us have 2 TCM’S A single & A double Stack Style of Whoop Ass’ with the 39 R rounds for the Glock Conversion Armscore or the 40 Grain from Armscore USA 2100fps 40. Love My TCM’S
And then we have the Tannerite Adventures & the Great Balls of Fire!

I am Surprised that the Conversion for the Glock’s never made it to the Round Table for Discussion in Our Fine Cocktail Hour.