The M*CARBO’s extra power spring totally rocks my world, what a game changer when using my Thompson Machine Isis-2 suppressor. Only 2 failure to feeds and I’m pretty sure that was an issue with how I loaded the mag.

Not in a super rush but I don’t want to open this thing twice live to know if there’s a trigger coming and also what’s a girl gotta do for a lil free shipping or discount round here? Maybe make some videos show everyone that it’s so easy to install a girl can do it.

Also anyone Cerakote their PMR or any Kel-Tec product, trying to figure out how it holds up on the Polymer frame and what temp to bake it at so not to damage anything.

If you got it to run at all with a suppressor then you did good.
KelTec recommends your don’t use a can in the gun. It’s a tilt barrel gun which normally requires a piston to operate.

“Due to the unique locking action of the PMR-30 pistol and the lightweight slide and barrel, the use of a suppressor is not recommended as it will cause an increase in gas volume and pressure and the slide will likely unlock early. This will cause an increase in gases and residue that is ejected back towards the shooters face and could also cause a case rupture to occur. Any damage or injuries caused by the use of a suppressor or other heavy weight muzzle device attached to the PMR-30 pistol will not be covered by any Warranty.”

Mind you a couple suppressor geek friends and I have been working on this issue because we’re all AR shooters and deal with suppressor induced blowback and timing issues all the time. The problem other than weight is internal pressures inside the can, cause blowback rupturing cases and causing the slide to disengage unlike an ar it can’t be easily remedied by adjusting the gas flow to the piston. (I run a piston not DI system)
Similar issue and there is a way to engineer a solution. Address it internally like Thompson Machine with the ISIS-2 or OSS did with their RAD-22. They reduced weight and back pressure making for a functional PMR suppressor.

Ultimately the real solution for a PMR suppressor is one that Utilizes the longer threaded barrel that index the suppressor alignment but doesn’t actually thread into the suppressor. Instead it freefloats and the body of the can attaches to the frame of the firearm like we see being used by Fischer,

Fischer utilizes a flat sided suppressor design but it’s a pass through system like OSS and it mounts to the frame. This is the solution needed to tame the PMR’s massive muzzle flash and deafening report. Yeah it’s not a subsonic round but suppressors do enough to domesticate the PMR’s rudeness.

PS when ever I’m bored at 3AM I’ll fire up the computer open AutoDesks Inventor and run ideas through a Computational Fluid Dynamics simulation till I loose interest and climb back into bed. Which is what I should be doing but insomnia.

Here is a video which really showcases the way the RAD suppressor works.

And another link of the ISIS can on the PMR30. While I have video of mine it’s personal video and even though I’m a legal owner of a suppressor I do not advertise it by making videos, that is until I creat my own Fischer, then I’ll be plastering it al over the interwebs and tubes of you. 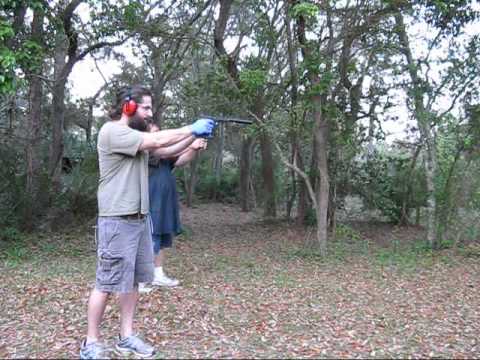 The PMR 30 is a neat little gun, if you can get it to run worth a damn. It’s so inconsistent and ammo sensitive it’s takes a while to find its “happy” place.
I wish you good luck on your endeavors with regard to the PMR, for me it’s just an occasional fun gun.

I do like the look of the RAD-22, nice can, may have to investigate further in that guy.

As far as ARs I prefer DI, less moving parts, less weight, less cost, simple to maintain and tunable if utilizing an adjustable gas block.
The only piston AR style rifle I own is a Sig MCX, great gun, utterly reliable but a pain in the ass to clean and reassemble. It has a tunable gas piston and to be honest I’ve only ever run it suppressed so I’ve never needed to mess with it.
To me a piston in an AR is making simple complicated.
I run several ARs suppressed and unless the ammo used is sub-sonic they’re still loud with the supersonic crack but they are reliable and easy to clean with the sonic tank.

Interesting stuff though for those of us that are into suppressers and really everyone should have a couple of cans in the safe.

Everything OSS does is worth a look, they are the new direction for suppressor design,