PCC or CCP? Maybe even PCP with a fold down brace

I understand that we all have options and ARs are currently the adult LEGO. What I am looking at is the differences between the pistol caliber carbine and the carbine caliber pistol.

During Desert Storm I used an M231 port firing device. It was a 5.56 open bolt flash cannon. It was neat and fun, but really no more effective than my MAC10. The 231 did have a LRBHO, that was important to me. I really never got back to the idea of a rifle cartridge in a short barrel until the 300 Whisper became an option. I saw the biggest paradigm shift was in the powder selection. In a 16” barrel a 300 Whisper (now Blackout) is a ballistic equivalent to the 30-30 with a 150gr bullet.

Moving forward. I currently have a 16” 300BLK and a 8”. I have done numerous tests with both side by side. The short barrel likes heavy bullets and fast powders compared to the long one. The fantastic part is I am still getting 1850fps with a 150gr matchking out of the 8 and it recoils like my buddies 9mm carbine. Out here in the plains it is more than enough energy for coyotes and deer.

I am currently building a 450 Bushmaster 7.5” pistol with a 4” buffer system. It should have more energy than a 454C and approximately the same size as the 460 S&W 8.5” revolver. A tool for the zombie apocalypse or serious social engagements. I plan on pig hunting with it. Pigs are not game here, so….no rules for hunting them, wide open, Wild West.

With the advancement in optics, I see why short barrels and compact ergonomic weapons are all the rage. I suppose it is entirely up to the end user whether the PCC or CCP or maybe PCP(pistol caliber pistol, revolutionary!).

Thank you for reading my ramblings. My objective is to start a conversation on use and technology of compact firearms.

Well written. I work pretty hard at shooting all kinds of firearms and years of practicing, drilling and great instruction pays off. I have built a couple of short barrel AR pistols. It’s tough to get them dialed in and working reliably. But they are fun to shoot. I found that an AR with only a buffer tube - no brace - it’s tough to put a round where you want it to go. It’s heavier than a handgun and difficult to aim reliably.

The question I asked myself after these builds was… what are rifle caliber pistols good for? Filling the air with lead is one. But without a brace or a stock (and sbr stamp) you just hope that you hit the target.

It’s not that I don’t like rifle caliber pistols. I do. Also MAC10/MPA designs. But I question their purpose for anything other than a range toy.

Pistol caliber carbines… I can come up with a lot of benefits.

The pic was of my 450 build. I have a QD built into the index hole on the lower, under the buffer tube. With a short single point sling, forward pressure on the sling helps stabilize the weapon. The green laser on top with a remote switch under my right thumb helps target acquisition. It also has a grip safety only that I have invented. Something like the ones on a Springfield Armory. I am currently working on the balance of the safety system. I am using a Deadfoot spring system in my own buffer tube. I have also installed a carbine length pigtail gas tube on the little barrel to help with dwell time. It is more of a custom than a proven HD tool. I have used all the components on other CCP, now I am incorporating all of them in one. It also has a rolling pin trigger, because I can sometimes imagine then produce something.

My 300 is much more of a conventional shockwave build. Exceptions being: cross bolt safety, ambidextrous bolt stop( like a PDQ ), flat wire buffer spring, Strike Industries handguard upside down and trimmed at the nose, and a flash can muzzle device with venturi ports in the back to burn the excess gas internally. It has never malfunctioned after hundreds of rounds.

It is my coyote gun.

@Mic Both are pretty cool. You gonna need to have that talk with the 300 because it has clearly entered puberty

I have a friend who is into 3-gun. He was questioning, why he couldn’t have a “Glock” rifle, that either has a grip safety or a trigger safety. A trigger flipper would be easy, so I decided to engineer a grip safety. B-5 grip and an 80%. I started to do some figuring. A horizontal bored from the rear centered on the top of the trigger pin hole. Then I built a toggle that pivots on the shelf in the back of the grip. I slotted the grip to accept the toggle and then the back of the grip for the safety lever to stick out. Currently, everything is functional, but the mechanism is a bit too heavy for my liking. So I am remaking some of the components for better balance. With proper balance, if the weapon gets dropped, the safety mechanism won’t move, even if the springs are broken.

CCP. Or should I say CCCP. I added the plum furniture. Otherwise pretty standard AK Pistol. The brace is OK but not what I would consider great. I will eventually add a Tailhook and fix that to a Magpul Zhukov.

As is the norm for AKs, this pistol eats any 7.62x39 ammo I feed it and folds up nice and small.

I wonder how it would like the 154gr load I have been seeing for 7.62x39? My 8” 300 really digs the 150gr range bullets. Also that bullet has more energy in my shorty than the lighter ones. Nice almost Krinkov. I have ran a few short AK variants in the Sand. Helped me decide to go with the 300BLK. Especially in short, 30 caliber is much greater than 22.

I have a 300 BLK AR project that I have been neglecting for months. I got it all together and fired a few test rounds but I felt like it wasn’t ready for prime time. My hunch was the gas block or buffer was not optimal. 7.5 inch barrel. My game plan was switch to an adjustable gas block and revisit the buffer spring and buffer weight. But I put it aside and haven’t gotten back to it. I started with a stripped lower and upper, assembling it from parts I had on hand vs. my usual habit of planning out the build and ordering specific parts.

My aim for this pistol was for it to be suppressed, so I briefly tested it with 220 grain subsonic with the suppressor both. on and off. The can was likely affecting the gas. Thus inspiring my decision to change the gas block.

I’ll post some pics on this soon. I have the itch to get back to it and finish the job.

I’m sure. Significantly diminishing returns with barrels longer than 8” with 300 BLK. What’s the optimal mass, velocity and spread on impact for 300 BLK? I don’t know. But at short range I’d opt for the heaviest hollow point ammo - 200-220 gr.

I am using a Stike Industries flat wire spring and a one piece gas ring. If you choose to use an adjustable gas block, I really like ones that are indexed, so you can repeat the position. I run a 194gr Lehigh Defense bullet supersonic, it is as long as a 240gr lead core bullet. I started with the max data for the 240gr supersonic and found it to cycle and be boringly accurate, so I stopped there. All un suppressed. You may want to run those heavy bullets super without a can, and slow with a can. Might fix your issues.

I also dry cycle the AR over 100 times before ever firing, then lube and head to the range.

I find rifle cal. Ar pistols extremely versatile. As i got older i am unwilling to carry heavy weapons into the woods, and weapon and game out. This is where the ar pistol shines. 10 to 250 yrds a 7 to 8 inch barrel is terrific. 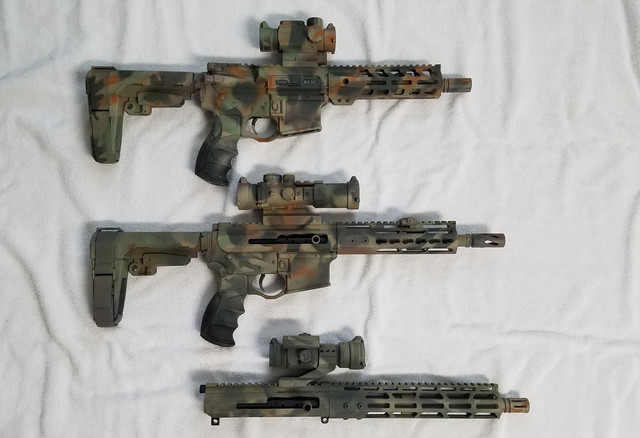 Top picture i shot deer at 175 yrds. My 277 wlv is under my left arm slung uzi style. With all the gear, rifle , and deer to transport short and lite are critical. Yes i toss the rope across, cross the deep creek, then drag deer off rock ledge and across.