TODAY 12-20-68 means Nancy and I made 54 years married together without killing each other.

I’d call that a win. I keep my guns stored high. She can still get to them but I will hear her scooting the chair. 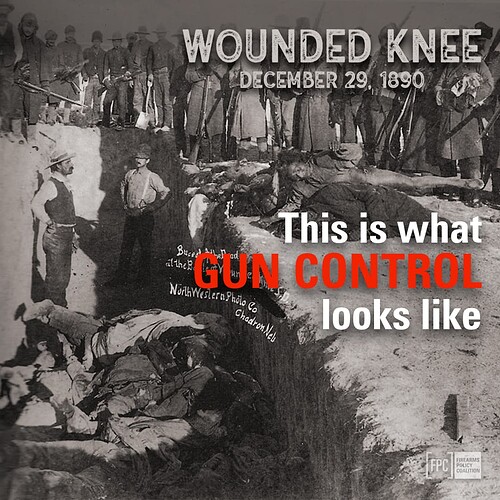 Good for You Guy’s

On January 13, 1128, Pope Honorius II grants a papal sanction to the military order known as the Knights Templar, declaring it to be an army of God. Led by the

Richard Crafts, a Connecticut man accused and later found guilty of murdering his wife and disposing of her body in a wood-chipper, is arrested on January 13,

If any of y’all want to kill me, please follow Mr. Crafts process above…
“murdering his wife and disposing of her body in a wood-chipper”… not the other way around.

Thanks in advance,
David Hunter

Being a gun based (more or less) forum, I like the militaria based history primarily but I could not pass on the wood chipper!

The execution of Gary Gilmore

Gary Gilmore, convicted in a double murder, is shot to death by a firing squad in Utah, becoming the first person to be executed in the United States since the death penalty was reinstated in 1976.

In 1972, the U.S. Supreme Court ruled that, in violation of the eighth Amendment to the Constitution, the death penalty qualified as “cruel and unusual punishment,” primarily because states used capital punishment in “arbitrary and capricious ways,” especially in regard to race. However, in 1976, with 66 percent of Americans supporting the death penalty, the court ended the constitutional ban on capital punishment, provided that states create specific guidelines for imposing death sentences.

In 1977, Gilmore was the first person to be executed since the end of the ban. Defiantly facing a firing squad, Gilmore’s last words to his executioners before they shot him through the heart were “Let’s do it.”

I bet if we went back to this for crimes with firearms the violations would go way down.

Taking my arm brace away sure as hell isn’t going to .
Larry

I bet if we went back to this for crimes with firearms the violations would go way down.

Taking my arm brace away sure as hell isn’t going to .
Larry

That would be holding people accountable for their actions. Something that, unfortunately, is frowned upon in this country anymore.

THIS DAY IN HISTORY

At the end of a joint sting operation by FBI agents and District of Columbia police, Mayor Marion Barry is arrested and charged with drug possession and the use of crack, a crystalline form of cocaine. At the Vista International Hotel in downtown Washington, Barry was caught smoking the substance on camera with Rahsheeda Moore, a woman who had agreed to set up Barry in exchange for a reduced sentence in an earlier drug conviction.

In September 1991, he was sentenced to six months in prison for possession of crack cocaine. After serving his sentence, Barry, claiming to have overcome his “personal adversities,” reentered D.C. politics. He was elected to the city council before once again winning the mayoral election in 1994 for an unprecedented fourth term. In 1997, Barry, often accused of corruption, was stripped of much of his power by Congress, which passed legislation to end “home rule” in the District, returning the city to the pre-1974 system of administration by federal-appointed commissioners. In January 1999, Barry retired and was succeeded by Anthony Williams as mayor of the nation’s capital. However, Barry entered politics again when he ran for the Ward 8 City Council seat and won with 96% of the vote in November 2004. He died in 2014.

The People’s Republic of China formally recognizes the communist Democratic Republic of Vietnam and agrees to furnish it military assistance; the Soviet Union 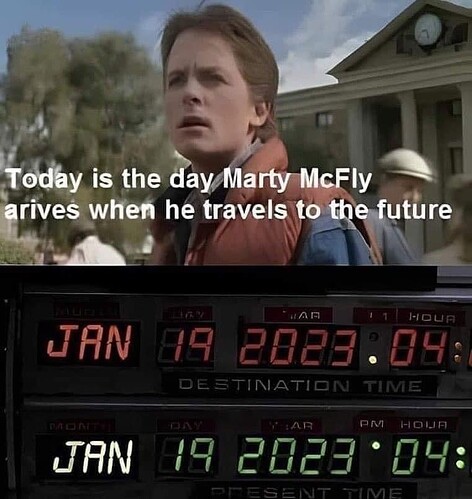 My calendar says today is the 20th 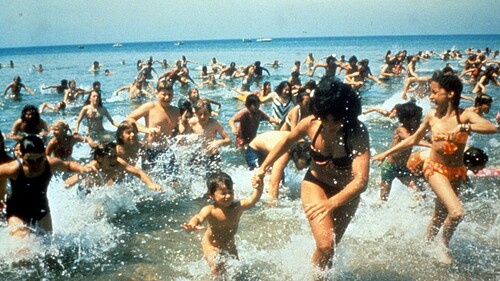 On June 20, 1975, Jaws, a film directed by Steven Spielberg that made countless viewers afraid to go into the water, opens in theaters. The story of a great white shark that terrorizes a New England resort town became an instant blockbuster and the highest-grossing film in movie history until it was bested by 1977’s Star Wars. Jaws was nominated for an Academy Award in the Best Picture category and took home three Oscars, for Best Film Editing, Best Original Score and Best Sound. The film, a breakthrough for director Spielberg, then 27 years old, spawned several sequels.

, Spielberg went on to become one of the most influential, iconic directors in the film world, with such epics as Close Encounters of the Third Kind (1977), Raiders of the Lost Ark (1981), ET: the Extra-Terrestrial (1982), Jurassic Park (1993), Schindler’s List (1993) and Saving Private Ryan (1998). E.T., Jaws and Jurassic Park rank among the highest-grossing movies of all time.

Rocks is all i can say! (Movies) 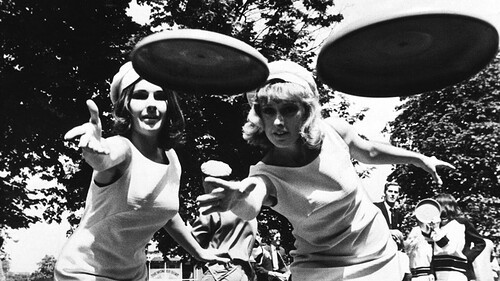 On January 23, 1957, machines at the Wham-O toy company roll out the first batch of their aerodynamic plastic discs—now known to millions of fans all over the world as Frisbees.

The story of the Frisbee began in Bridgeport, Connecticut, where William Frisbie opened the Frisbie Pie Company in 1871. Students from nearby universities would throw the empty pie tins to each other, yelling “Frisbie!” as they let go. In 1948, Walter Frederick Morrison and his partner Warren Franscioni invented a plastic version of the disc called the “Flying Saucer” that could fly further and more accurately than the tin pie plates. After splitting with Franscioni, Morrison made an improved model in 1955 and sold it to the new toy company Wham-O as the “Pluto Platter”–an attempt to cash in on the public craze over space and Unidentified Flying Objects (UFOs).

In 1958, a year after the toy’s first release, Wham-O—the company behind such top-sellers as the Hula-Hoop, the Super Ball and the Water Wiggle—changed its name to the Frisbee disc, misspelling the name of the historic pie company. A company designer, Ed Headrick, patented the design for the modern Frisbee in December 1967, adding a band of raised ridges on the disc’s surface–called the Rings–to stabilize flight. By aggressively marketing Frisbee-playing as a new sport, Wham-O sold over 100 million units of its famous toy by 1977.

High school students in Maplewood, New Jersey, invented Ultimate Frisbee, a cross between football, soccer and basketball, in 1967. In the 1970s, Headrick himself invented Frisbee Golf, in which discs are tossed into metal baskets; there are now hundreds of courses in the U.S., with millions of devotees. There is also Freestyle Frisbee, with choreographed routines set to music and multiple discs in play, and various Frisbee competitions for both humans and dogs–the best natural Frisbee players.

Today, at least 60 manufacturers produce the flying discs—generally made out of plastic and measuring roughly 20-25 centimeters (8-10 inches) in diameter with a curved lip. The official Frisbee is owned by Mattel Toy Manufacturers, who bought the toy from Wham-O in 1994.
END
Larry

Sir Winston Leonard Spencer Churchill, the British leader who guided Great Britain and the Allies through the crisis of World War II, dies in London at the age of 90.

Born at Blenheim Palace in 1874, Churchill joined the British Fourth Hussars upon his father’s death in 1895. During the next five years, he enjoyed an illustrious military career, serving in India, Sudan, and South Africa, and distinguishing himself several times in battle. In 1899, he resigned his commission to concentrate on his literary and political career and in 1900 was elected to Parliament as a Conservative MP from Oldham. In 1904, he joined the Liberals, serving in a number of important posts before being appointed Britain’s first lord of the admiralty in 1911, where he worked to bring the British navy to a readiness for the war that he foresaw.

In 1915, in the second year of World War I, Churchill was held responsible for the disastrous Dardanelles and Gallipoli campaigns, and he was excluded from the war coalition government. He resigned and volunteered to command an infantry battalion in France. However, in 1917, he returned to politics as a cabinet member in the Liberal government of Lloyd George. From 1919 to 1921, he was secretary of state for war and in 1924 returned to the Conservative Party, where two years later he played a leading role in the defeat of the General Strike of 1926. Out of office from 1929 to 1939, Churchill issued unheeded warnings of the threat of Nazi and Japanese aggression.

After the outbreak of World War II in Europe, Churchill was called back to his post as first lord of the admiralty and eight months later replaced the ineffectual Neville Chamberlain as prime minister of a new coalition government. In the first year of his administration, Churchill promised his country and the world that the British people would “never surrender.” He rallied the British people to a resolute resistance and expertly orchestrated Franklin D. Roosevelt and Joseph Stalin into an alliance that crushed the Axis.

In July 1945, 10 weeks after Germany’s defeat, his Conservative government suffered a defeat against Clement Attlee’s Labour Party, and Churchill resigned as prime minister. He became leader of the opposition and in 1951 was again elected prime minister. Two years later, he was awarded the Nobel Prize in Literature for his six-volume historical study of World War II and for his political speeches; he was also knighted by Queen Elizabeth II. In 1955, he retired as prime minister but remained in Parliament until 1964, the year before his death. 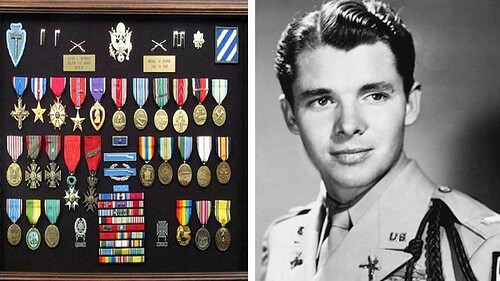 THIS DAY IN HISTORY

The most decorated man of the war, American Lt. Audie Murphy, is wounded in France.

Born the son of Texas sharecroppers on June 20, 1925, Murphy served three years of active duty, beginning as a private, rising to the rank of staff sergeant, and finally winning a battlefield commission to 2nd lieutenant. He was wounded three times, fought in nine major campaigns across Europe, and was credited with killing 241 Germans. He was awarded 37 medals and decorations, including the Distinguished Service Cross, the Silver Star (with oak leaf cluster), the Legion of Merit, and the Croix de Guerre (with palm).

The battle that earned Murphy the Medal of Honor, and which ended his active duty, occurred during the last stages of the Allied victory over the Germans in France. Murphy acted as cover for infantrymen during a last desperate German tank attack. Climbing atop an abandoned U.S. tank destroyer, he took control of its .50-caliber machine gun and killed 50 Germans, stopping the advance but suffering a leg wound in the process.

Upon returning to the States, Murphy was invited to Hollywood by Jimmy Cagney, who saw the war hero’s picture on the cover of Life magazine. By 1950, Murphy was awarded an acting contract with Universal Pictures. In his most famous role, he played himself in the monumentally successful To Hell and Back.

One of my favorite actors of all time. I knew he served but never knew all he was awarded for his service. Great stuff.