New to S2K and new here

I’m brand new to outfitting my own weapons. I’m not very confident about buying things that won’t fit or won’t work but I’m branching out.

I snagged the optic mount from MCARBO.

I really want a prism optic but I’m not sure what would fit on the mount…? Any ideas? Any pictures? I know the majority of prisms are too large but there’s a few that are smaller in comparison. Primary arms has some…

Basically I’m overwhelmed and looking for some ideas. TIA.

Basically I’m overwhelmed and looking for some ideas. TIA.

That leaves you trying to bridge the gap between where the mount puts it and where it needs to be located with rail adapters and the like.

Prism can be placed for eye relief with a cantilever mount but it is awkward. I would stick with a red dot. The S2K isn’t a long range firearm anyway.

I liked the idea of an etched reticle. I had to pull out of self defense once before and the optic I had at the time was not motion activated. The last thing I thought about was turning on the optic. Granted I can’t imagine a time where I’d need an optic for such close range, but the thought is nice. My wife calls stuff like that a false sense of security lol

A Nydar sight from the ‘40s would possibly work. Works like an open frame dot sight without batteries. I also trust the Aimpoint and C-More. Sig Romeo 5 are nice shake awake dots. I have done tons of research on optics and some real world torture tests in the Middle East. I would stand behind these in a harsh environment. There are certainly others out there that are worth betting your life on. I just know what I have observed and tested. I have never seen a prismatic optic setup for an extended eye relief. Not that it is impossible, it would hamper the field of view and be complex to align with your eye. If you don’t need to observe the entire target, an occluded sight would work. The See-All is an option. It will cover the lower part of the target while putting the reticle on the same focal plane as the target. Works like a WW2 fighter aircraft sight. No power, and can be had with a tritium illuminator if you desire. It is bomb proof.

I found mine by running pistol optics on my Subs. Running Holosun 507Cs. Shake awake and solar are perfect for the Sub. 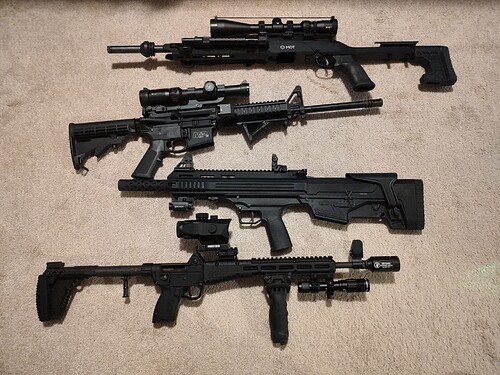 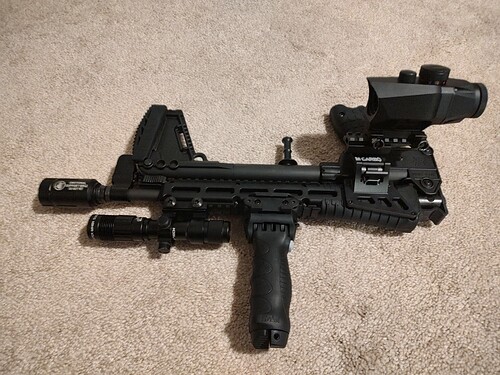 It can be done. That said it’ll sit REALLY high. That’s fine if you’re always shooting at, say, 25 yards but the distance from the barrel to the sight ends up being 3-4". Makes it hard to be precise at varying distances. Plus the eye relief is only 3.5" so you really have to hug the gun to get a good view

That said I found a laser mounted on the bottom rail is REALLY fun.

I’m considering trying this though: 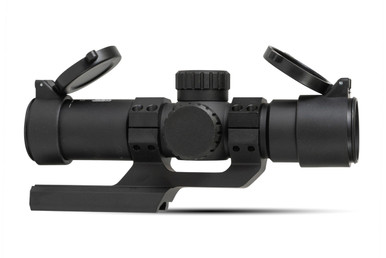 The Monstrum Stealth Series is the latest iteration from our best selling line of SFP rifle scopes! The Stealth 4x30 is a full-featured scope suitable for hunting, target shooting, or tactical use, the scope comes equipped with: Fixed 3 times...

Eye relief is a lot better which should make it easier to shoot. Might order one towards the end of this month to try it out.

The one thing I like about the prism over a red dot is it works better with my astigmatism. I’ve shot both on the gun, though, and if I could just get the prism scope lower to the barrel it would win hands down but I’d say they’re a draw either way as I have it mounted.

A shotgun or EER may be another option. The weight piles up as with the options. I have used an old pistol scope on the forend, because it worked. Like a super scout mount. At 2.5x it fixed my astigmatism and made the rifle look a bit like a WW2 sniper prototype.

The one thing I like about the prism over a red dot is it works better with my astigmatism. I’ve

I have the same issue and found that a circle dot reticle and an updated RX solved the problem.

I normally shoot with glasses on. Bifocals don’t help the situation. Especially with my EDC I shoot with my glasses on mostly. On my failure drills and unconventional shooting position work it is about 50/50. If I am knocked to the ground, it is quite probable I have lost my glasses as well. At least they may be messy enough to not be very useful.

I’m due for a visit to an eye doc but I think instead I’m going to go get lasik. I’ve been practically blind for 40 years. I know I’m married to a pretty wife because I’ve seen her when I have my contacts in. Id just like to verify she’s pretty first thing in the morning before I put my contacts in.

I’ve read online that sometimes they can correct the astigmatism with lasik. I have a couple really big commission checks coming my way so now seems like an excellent time to do it.

If you happen to have cataracts or the beginnings of them. Sometimes your insurance will even pay a chunk of it.

Actually my insurance does help out already.

Bifocals and astigmatism are both problematic because only a very specific part of the eyeglass lens corrects. But with a rifle you are looking through a different part of the lens outside the area of correction. A good optician can make shooting glasses with the correction in the right location but those are impractical for daily use. I find a circle dot minimizes the issues and helps me guesstimate which of the glare dots is the right one.