Everything has been said allready about the job of installing all your parts. I along with many here have tore our subs down probably more then keltec has cause we installed the mcarbo parts one at a time as they came out. Now days i would deffently recommend opening the shell once install all the parts you want to install inside and close her up. Then you can worry about the outside bits. And keep all the great install videos mcarbo has close by for stop and play guide. And i can promise if you run into any kind of snag somebody here has experienced it and fixed it. Good luck and god speed

One final thing: take pictures as you go. Its never too many.

If you get done and can’t get it to cycle… Flip the hammer around. I did that and thought I ruined the gun. Turns out I just didn’t take enough pictures. It was a stupid mistake that costed me $75 to have a local gun smith figure out.

Once you’re done and get to shoot it you’re going to love it.

Anyone have any suggested parts (springs, etc) as backup before I tear into the internals and springs start bouncing around the room never to be recovered.

Just a quick suggestion… go take it to the range for some factory validation before you start tearing it apart.

Because i did the math on the upgrades, I bought the Mseries with everything done, and even though im completely satisfied, i wish i knew how much better it is.

The first change I made was adding the MCARBO rear folding sight for the KelTec one. Doesn’t automatically pop up, and the peep is way better than the KelTec. Has a nice bevel that reduces reflection in the peep. Then I replaced the front sight with a Red Lion. The KelTec design is too easy to knock out of line, and Red Lion has really thought theirs through. It adjusts with a system like an AR rear, and it folds down. And whether folded down or standing up, it fits into the butt pad as it should. I frankly don’t use the sights much - looking over the top of the rifle at the target, at 25 yds. it only shoots a few inches high. Center mass gets the sternum…

I put the “two-finger” bolt handle on for a better grip for me. I put the MC tube cover on, just because. I did get the MC spring kit with all of the parts, to get things like the metal feed ramp. Sent it into KelTec and got their install. $40 was a great price to get it done right and preserve the warranty, and they put the Red Lion on at the same time for the same price (I didn’t have a good barrel vise).

Did it make it more expensive? Oh yeah. But I have other firearms that I have way too much money in, and that’s OK. Make something yours. Besides, I run into other S2K owners that have done their own thing, and we compare notes. What’s better than that?

I do wish MC would come up with a better butt pad extender. The whole thing of drilling holes and using screws is a little clunky for them. I would just make a replacement part that works exactly the same, but is longer (or deeper, however you think of it). I have seen rubber ones out there that slip over the KelTec one, but everyone seems to split them eventually.

In retrospect, I should have polished all the internals when I installed the feed ramp but the wear from extensive shooting seems to have smoothed everything out.

Polishing is good if you have the tools, supplies and patience. But I’ve been told nothing polishes quite as well as gun oil mixed with powder residue. As you now know.

I hate promoting a competitor on this site but this butt pad is really, really good, requires no drilling and it’s cheap. Oh and super comfortable and doesn’t slip at all.

Hopefully MCarbo can kinda immitate this one in the future. Its gotta be pretty easy to make once you have the mold figured out.

They either ripped off Missouri Tactical, or vice versa.
I smell lawsuits in the air.
A few years ago i proposed this concept over a few emails with MCarbo when i first joined, and they went silent on it, im assuming because one of the two in question above were already in process with patents.

Thank you, I’ll get right on that!

If I were to guess I’d say the Missouri Tactical was first. The Amazon one is probably the Chinese manufacturer who decided to sell it directly themselves after doing zero design and development bet, hey, they have the molds, right?

I didn’t know that background. That said it really is nice to use.

I’m a mechanical engineer (or rather was one once). I was once tasked with taking a competitors product and making something better to do the same thing. You only need to change about 25% to do it. I’d say sorta copy the half that sticks to the factory stock and completely change the other half.

Or, you know, work it out with Missouri Tactical to sell their pad under the MCarbo name. Heck MCarbo could probably sell it for more just because of the name.

I keep hearing “polishing ALL the interiors”, besides polishing the new feed ramp what else exactly?

I’ve not gone the polishing route as of yet. Some old-timer told me that about the gun oil/powder residue years ago. The more you use 'em, the more they self-polish. But ammo was cheap back then…

Thanks for the info. The KelTec one works well enough for me. Most of my rifles have a longer LOP is all. I don’t notice the recoil on the 9MM, although my friend did.

DrWho
Congratulations on getting a Sub2k. My advice to you concerning upgrades comes down to practicality. Try to answer the question: what role this weapon will fulfill. Mine is as home defense and an emergency evacuation in-vehicle defense long gun, the mags and caliber match both my carry and home defense pistols. I upgraded the front sight post to something I can identify more clearly than the plain black post. I chose the recoil management upgrade path from M-Carbo because I felt that gave me the most value for my dollars. I have the recoilless charging handle, the buttstock pad, bolt tube cover and recoil buffer ring. These additions cost less than $100. I am very happy with how the gun feels when shooting. I have a buddy with an unmodified Sub2k and when we shoot together I get a better direct comparison which confirms my upgrade decisions. I don’t put a ton of rounds through the weapon. I try to stay proficient and don’t concern myself with precision targeting. I’m satisfied hitting within the silhouette at various distances at the range. I have no issue with the trigger, trigger guard, or the stock feed ramp. The optic mount has been on my Christmas & birthday gift wish list, but alas my family chooses other gifts. I hope my story helps you in deciding the right upgrade path for you.

If it helps any if cost is an issue get a 45 offset MLok adapter and mount a cheap read dot on it. I ran mine that way for a while and it was comfortable enough.

I just wanted magnification so I went the stupid route and added a prism scope and riser to MCarbo’s mount. And a laser. And foregrip that converts to a bipod with a slot for the switch for the laser. And everything else.

But it looks cool and that’s what counts!

Seriously, though, for your use I’d do the 45 degree MLok because it’ll fold up smaller. The one thing about the MCarbo mount is the bulk when the gun is folded. A quick detach on it would be really, really nice to have. 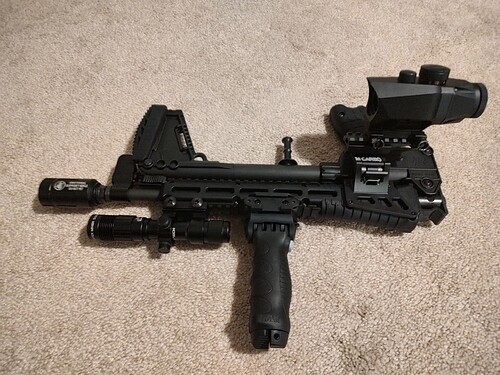 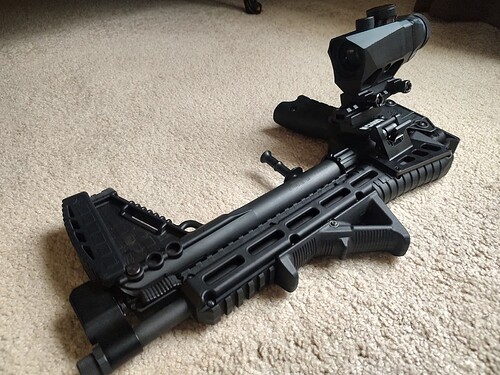 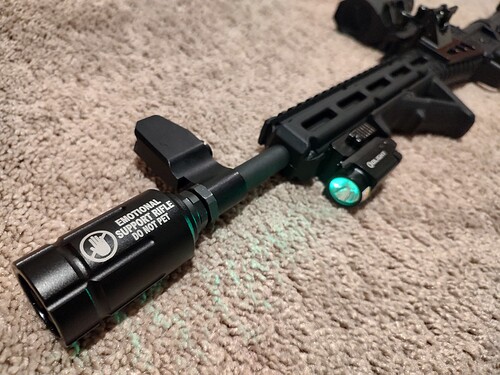 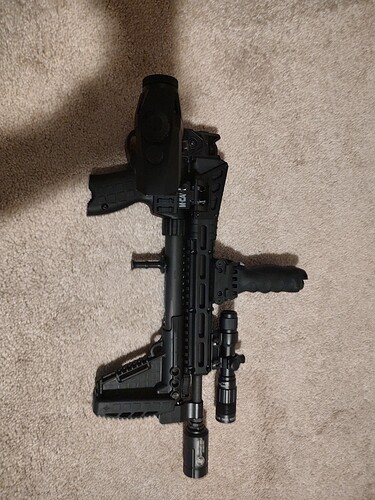 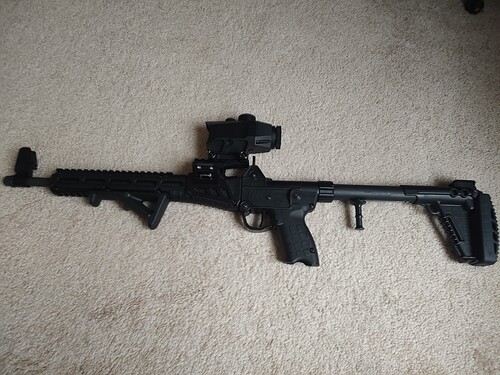 I 100% agree with what ColoradoRick had to say about the Red Lion front sight, it is light years ahead of the one that is on the gun from Kel-Tech. I put one on mine and love it. I have put just about every MCARBO upgrade on my sub 2000 and they were all worth it. Like they say, “Pay once cry once”, Oh and welcome aboard. MC