All of the internal upgrades were done. Nearly all are MCarbo. On the outside, TLR-3 Light and green laser, bipod, rubber face saver, MCarbo optics mount (my personal favorite upgrade for the S2K), two finger charging handle. Modestly priced but functional Bushnell RDS. The can is GEMTECH.

All of the internal upgrades were done. Nearly all are MCarbo. On the outside,

Wow, nice job.
You might want to polish it off with one of those custom snug fitting tactical but pads, I believe only come in black. 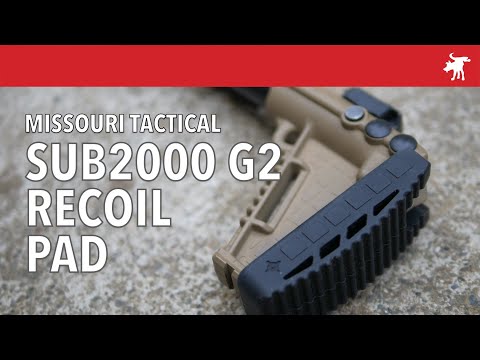 That Missouri Tac buttpad looks awesome. I’m all over it! I don’t use anything that looks like a kludge/doesnt fit right. Ordering today. Thx for the tip!

Missouri Tactical’s recoil pad for the Sub2k does come in FDE.

SUB2000G2 Recoil Pad is a slip-on recoil pad pad that fits SUB2000  generation 2 polymer butt-stock. It stabilizes and reduces felt stress  on the shoulder while helping with accuracy and speed. Easy to install.   No tool...

Hark!
Did somebody utter FDE?!?

I saw that. After a few minutes of hesitation, I decided to go with black.

@Dung, good choice since you’ve already got black of the rifle. I’m sure you’ll love it.

Say Dung, Does the “front end” of your gun feel heavy compared to the rear stock end? I was thinking of the balance point being about the trigger.

I’d say no. The light and laser don’t weigh much. The can is what it is. I’ve gotten used to the balance - which isn’t too bad. The bolt is aft and that’s the heaviest part on the gun by a wide margin. Most carbines, even some 22 rifles have far heavier barrels than the S2k. If suppressed, a 9mm or other calibers require a bigger, heavier can.

I haven’t really worried about the center of gravity. My requirements for this class of gun are portability, overall weight, accuracy, and length. The purpose being can I comfortably and rapidly swing the rifle and aim, head up and both eyes open in a confined space like a home or other indoor scenario. The laser I could live without, but a light is essential. The basic idea being you cant hit what you cant see. The suppressor… kind of important if there’s a situation indoors. But that’s a preference more than a necessity.

Missouri Tactical’s recoil pad for the Sub2k does come in FDE.

Bad influence…I just had to buy one…

Not too much added to a stock S2K 2nd MMag. The Mcarbo spring/pin/etc kit went in early. A Red Lion front sight - good upgrade over the stock one. Extended bolt handle, spring buffer, the sleeve for the tube. After my dad passed away, I found a green laser in the safe - never used. The jaws don’t adjust, so it doesn’t work on everything, but since this is a plastic rail, I scooched it on the bottom rail (I forget the make - it has a pretty big slide switch, which is perfect to have the thing in right in front of my hand). I see green better. I added the Mcar rear flip-up sight - the peep model. To be honest, I shoot this thing without using the sights. I just look at the target. Look at center mass at 25 yds and they hit about the sternum. I did buy the Mcar muzzle brake but haven’t put it on yet. I did send the Mcar kit to Keltec for install - I called them first and asked if they would install the Red Lion sight at the same time. They said Yep and didn’t charge me any extra. A lot of you could do this yourselves, but I had no way to unscrew the original w/o twisting the barrel. I wanted to keep this as light as I could, and as short as I can, so this might be all I do. I need it to still fit in the canvas “messenger bag” I got from Amazon to carry it in, so it can’t get too long, either.

@Moosecall thanks for the video on the butt pad

@DocA thanks for the link to it

On its way to me!

Whats that on the front end? Silencer or suppresser?

Whats that on the front end? Silencer or suppresser?

The can is GEMTECH

My guess is “can” is the suppressor

It’s the real McCoy. I never saw the value in those fake cans. All show and no go. Like stuffing a sock in your pants.

If you dont have one and are thinking about getting a can… couple of tips:

Silencer/suppressor are synonymous. Silencer is more a marketing term. Suppressor is technically accurate. I think Hollywood came up with the name ‘silencer’ because it sounds more dramatic. Funny thing is no suppressed gun is silent like the movies. Any round that travels at supersonic speeds makes noise. Even subsonic rounds when shot thru a suppressor make noise. All a suppressor does is reduce noise and muzzle flash. It’s still loud … typically a suppressor will reduce the bang down to somewhere around 120-150 db. Putting that in perspective… that’s how loud a passenger jet is at takeoff if you are standing 200 feet away. Normally, an unsuppressed gun shot is usually between 150 and 200 db. Doesn’t sound like a big difference suppressed vs. not… but it is.

The bad news is it take almost year to get one. You pay up front and Uncle Sam takes an additional 200 bucks out of your wallet - also up front. It’s advisable to set up a gun trust and have the trust own the can vs. you as an individual. That costs a few bucks too. Silencer Shop does a good job of making all that government rigmarole and trusts a bit easier.

The other caution is some handguns and carbines don’t run right with a suppressor. You often have cycling problems, FTE, stovepipes, etc. They also blow gas and burned power back in your face thru the ejection port. You can tweak the gun to run better with a can attached and make it work more agreeably, but you are still going to need a shower after a day at the range.

My best experience with a suppressor is on a 22LR bolt action rifle. Very quiet with the right ammo. 9mm like my S2K… for it to be less noisy you have to run subsonic ammo. The down side is subsonic ammo can cause cycling issues with some semi-auto guns. It’s manageable, but like I said you have to do some trial and error with ammo and possibly tweak the gun. Like modify or change the recoil springs or in the case of an AR, use a different buffer/spring combo. I should also mention that .45 runs almost as care free as the 22LR. 45 being inherently subsonic. It’s way quieter than suppressed 9mm.

Final notes: 22LR runs very dirty and after 200-300 rounds you have to disassemble and clean the suppressor. All that funk that usually flies out the muzzle gets caught in the baffles. The second is… after running 1-2 mags in short order, a suppressor will be hot enough to fry your hand like a strip of bacon.

Hope this was helpful!

I think Hollywood came up with the name ‘silencer’

The first patent on such a device was for Hiram Percy Maxim. The patent is for a “silencer,” issued in 1909. Fun fact of the day lol

Silencer = consumer marketing. Harvey was a clever guy. He called his suppressor a silencer for a reason. Silencer sounds a lot more appealing than suppressor. Always focus your sales pitch on the positive. Something that’s suppressed seems negative and not nearly as useful as something that’s silenced.

Like Paul Harvey used to say, the rest of the story is suppressors were regulated in 1934 under the NFA. The AG at the time managed to get suppressors into the act along with ‘sawed off’ barrels and fully automatic weapons for reasons history cannot explain. The reason automatic weapons and sawed off shotguns were controlled is because they had become a favorite weapon of the legendary gangsters and bank robbers in the 20’s and 30s. It gave the Feds another tool to use against organized crime. Suppressors on the other hand were mostly used by hunters and target shooters. Even gun hating European countries don’t think suppressors are a big deal. You can buy one over the counter in a hardware store in France and a few other countries. Just don’t try to smuggle it back to the US.

It’s also interesting to note that the NRA endorsed the NFA in 1934. The restrictions on suppressors was tightened more in 1986.

Note that not only does Harvey’s device make your gun quieter, you can put it on your Ford.

Note that not only does Harvey’s device make your gun quieter, you can put it on your Ford.