If necessity inspires invention then lack of resources; physical or financial would be the force driving creativity.

I have as lawmakers would say “overspent my deficit” on this AR project. Between giving $400 to uncle Sam in the form of tax stamps (This is a statement not a complaint I am happy to pay for the privilege of building a hardware Not everybody owns and not everybody should own) I have run myself a bit short and realise at the range I could use some grips. I also came to the conclusion that I don’t like the short vertical grip I had in the front nearly as much as I thought I would. So I begin looking for front grips and possibly some sort of way of hanging my rifle or having a lashing point where I could secure it to my backpack.

In the end I made a little holder for some Allen/torx wrenches and spare battery along with a cleaning cloth that fits neatly in the grip. As far as the handgrip goes, I’m pretty happy with it. It cost me roughly 6 bucks does everything I need it to. Lastly I had an engineering issue. When I milled my lower I accidentally left some slop in it and didn’t realize till I was at the range that this movement would one day cause the lower to crack. Solution to that make a shim using some stainless I had laying about after making an instrument cluster for a cafe bike, To ensure it indexes properly and because the metal was a little to thick I filed a notch into the receiver till it snugged the upper and lower for a perfect fit.

So Show me your Low budget solutions using off the hardware store shelf items.

Who cares as long as it works for you? You don’t strike me as someone who gives a damn about what other people think about you. LOL

what type of cord are ya using, if ya dont mind me askin…

Looks functional to me, well done.

Cool.
Couple questions, where did it crack? Photo?
How did you do your milling? May have been mixed matched upper and lower that cause the gap, not a milling error, looks like your pins index correctly.
Cool flash can. Er, I mean suppressor.

I do not recommend wrapping with Paracord because it has so much stretch, this specific cord has virtually no stretch. I also soaked the amount of cord I’d need in hot water then hung a 25 pound weight to ensure it wouldn’t bunch. I’d recommend Kevlar or Nomex if your in the practice of doing mag dumps.
https://www.acehardware.com/departments/hardware/chain-and-rope/ropes/7373467?store=16171&gclid=Cj0KCQjw9b_4BRCMARIsADMUIyrp97pqYbcT8mEtGBhXKlyp-DQvEXQ0sqnLE-vlXrPnk5mERief-wsaAqteEALw_wcB&gclsrc=aw.ds

I also have a suppressor how ever I just cleaned then wrapped in plastic going to Anodised it bronze like the comp shroud. Its mostly an aesthetic thing everything works just fine. With the shim it doesn’t bind the bolt. To be honest it’s a work around but for now it will do. I’ll be upgrading to a proper mill but I need something functional for now.

thats why i was askin, the heat coefficient

that gap looks to just be a mismatch, why i went to Core on 80%s, had that on a couple of anderson lowers, to areo uppers. accu wedge took the slop out /tightened it up.shim looks good.

Doesn’t look bad at all. I’d say that the side charger upper is what is giving you that gap issue, since its a non mil spec upper on a mill spec lower. Unless the take down pin holes were drilled wrong from the manufacture.

I don’t have any diy stuff, but I have hacked up parts to make stuff work for me. Most expensive isn’t always the best for you. I’ve got some pricy paper weights laying around here. Ya live and learn. But end of the day you have to work with what you have. Improvise to overcome. Very jealous here, as I can not have a sbr or pistol at here in kommiefornia. I envy you all!

@GOBLIN no buffer retainer hole on your lower?

that batch didnt come with it drilled. that was just after a machined the cavity prior to drilling any hole…

I wish you could have one of the prototypes I’ve been working on. Its a flat stacking system like Noziroh Systems lower made from G10 but in a bullpup configuration. Unlike Noziroh I’ll be listing the share file and anyone with access to a 3d router can cut them self one.
It’s similar to the one listed in the pic how ever Ive gone with a 45 style grip and lowered the bore line by 18mm. The model I’ve depicted was someone 3d plastic printed prototype hence why it’s so bulky. Big difference with the bullpup lower is you need to use a bufferless BCG upper.
How ever I’m Cali you could use it as a pull bolt action. Maybe throw a 20” upper chambered in 6mmARC. Would make for a super compact 800<1000 yard rifle.

I also believe your right, taking a Veneer caliper to this Gibbz charging upper and there are some in discrepancies with a true mil spec. 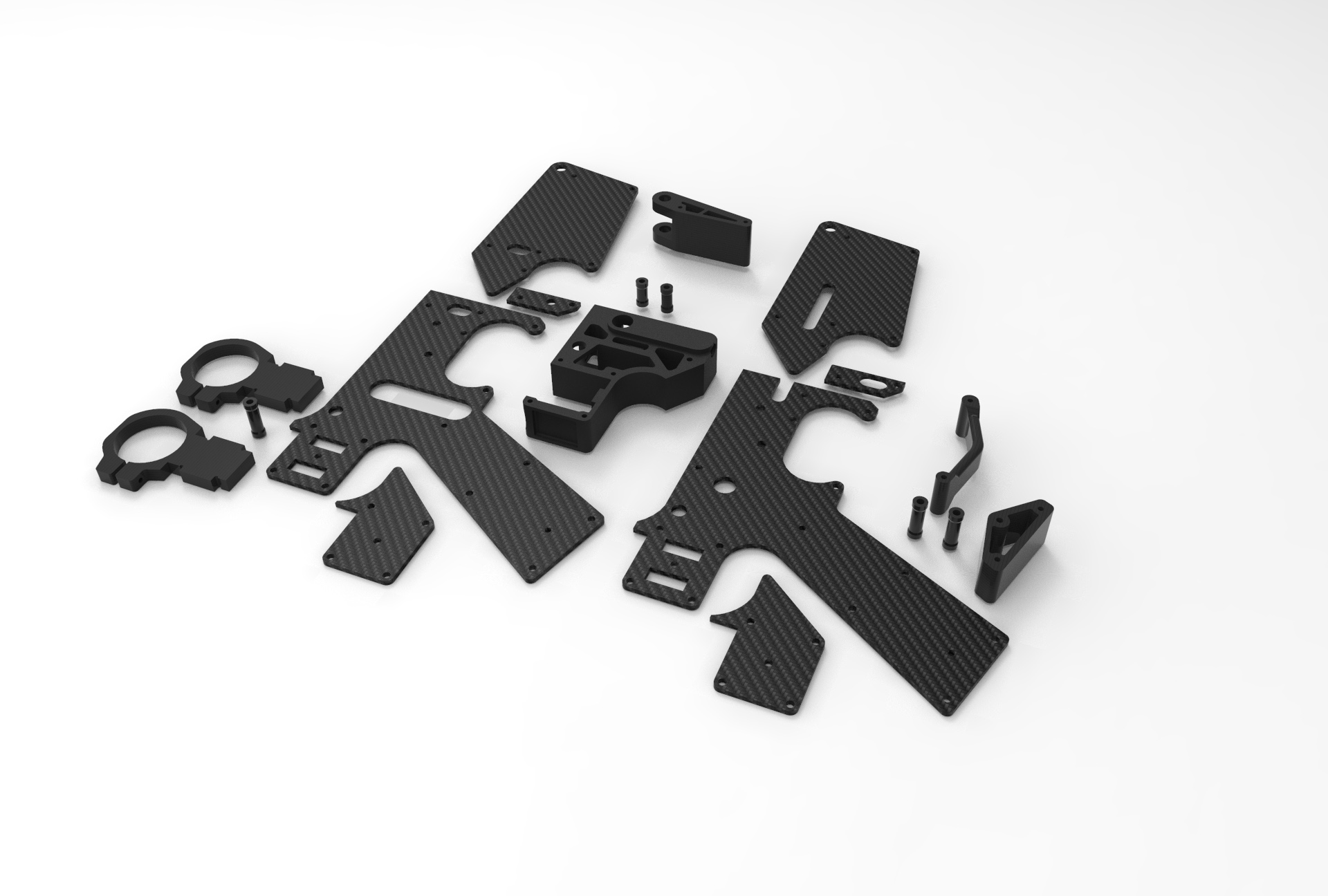 That there is a very interesting looking contraption! A mixture of a ar and ps90. Although g10 would be better, I don’t have or have access to a 3d mill. Funny you mention a 20" build, that is what is in the plans at the moment (no fancy cartridge, just 5.56). And if I get the option to do that I would. Since now if we want to home build here we have to apply for a sn from the doj, get their blessings have the sn engraved before it’s shipped, of course it has to contain a certain gram weight steel sn plate too, then registered. Did I mention I hate CA?

Either way I like seeing builds free people can build, and those scary cans that make your gun silent

what angle are you going to eject at, looks to be close to bouncing brass off your bicep.
thats why FN went with the top feed and bottom eject on the PDW

Angle of ejection isn’t something I had though about considering I’m 5’5” and my biceps is bout the side of your forearm. Ejection really depends on how you have your AR specifically tuned. Anything fro 3:00 to 4:30 is acceptable. So as long as your not “chicken winging” it I’d think that should be fine.

To be honest it’s not completely new it’s just my remake of the BRN bullpup.

Bottom ejecting rifles are not a girls friend cause catching brass down a low cut Tee is no fun… no fun at all nope nope nope exact opposite of fun actually.

catching brass down a low cut Tee is no fun… no fun at all nope nope nope exact opposite of fun actually.

Or down the back side too!
Caught one from a neighbor at the range last summer. Right down my collar. Couldn’t get it out.

thats why they make brass catchers, that and for us reloaders…(and peoples that dont wanna leave a “hello I wuz here”)