RECALL PROGRAM As of November 2016, Caracal USA has assumed administrative and logistic operations to support the Caracal International Recall Program, which affected Model F and Model C pistols sold in the United States during 2012 and 2013....

Knight Rifles has received a small number of reports from the field of Revolution muzzleloading rifles accidentally discharging as the user closed the action. While there were no reports of personal injury, we asked those customers to return their...

If you have a Ruger 9mm American , check out this info.

@Texyank Your welcome John. We all have guns that we may have been unaware of having an issue, or like yours, have had for years and are still in original new condition.

Hope this topic will help provide access to valuable information that most people might not easily be made aware of.
Or the info isn’t made available through the normal channels for dissemination of safety information to the public.

In regards to the Rossi recall, understand that if you send in your Rossi revolver, they WILL NOT repair it. IT WILL BE REPLACED - WITH A TAURUS revolver.

I sent in my Rossi 461. A very pretty, deep blue 6 shot .357. Once they had it, I was told they were not repairing any of the guns and I would be sent a 5 shot .357 Taurus 605 with a matte black oxide finish. I shot it with full power .357 loads and the crappy Taurus grips hurt my hand. I could shoot full power loads through the 461 all day long and have no problems. After 20 rounds through the Taurus, I packed it up. I don’t care for the finish, I don’t care for the grips, I don’t care for the 1 less round. I regret sending my 461 in. It was just my bedside gun and not a carry piece so I wasn’t truly concerned about the safety recall too much. But I sent it in, thinking they were going to make a modification to it and not chop it up and send me a Taurus.

@Popeye
Thanks for that heads up. I appreciate having the added, firsthand info.
Having members provide this kind of direct knowledge (not hearsay, third hand, opinion, or assumption) helps in making this topic as valuable and accurate of a reference source for addressing all related concerns as we can.
That sucks about the replacement. I have to say it doesn’t seem to be an equitable and comparable substitution to the 461.

It has come to our attention that the original forms sent out did not have one of our documents. The first document below is the document that was ommitted from our last email. The other documents are the same. If you have already sent us your SBV for replacement please fill out the first document and email to sales@fostech.us. If you have not sent us your SBV, please fill out all the forms below and send to FosTecH. If you have any questions, please call FosTecH at 812-445-4028 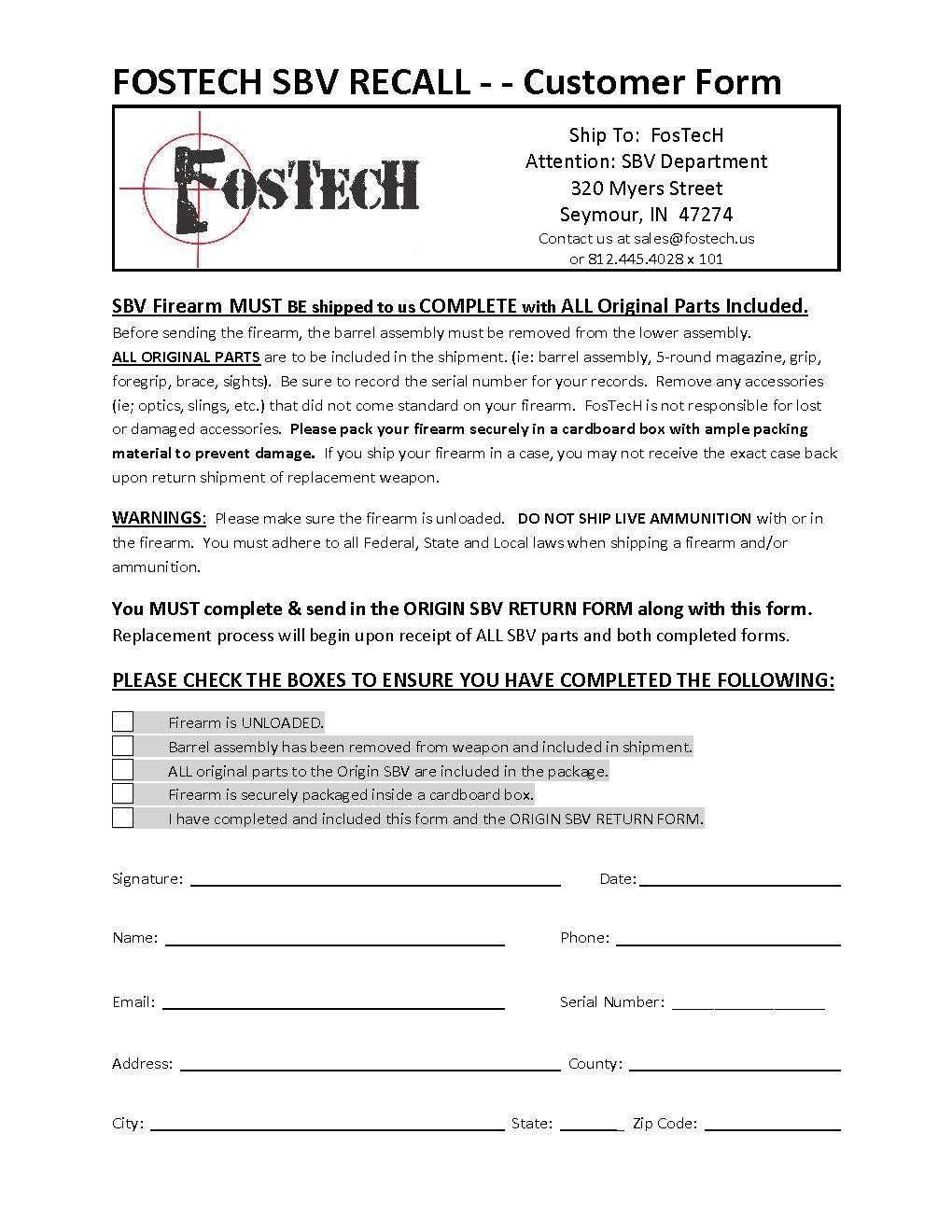 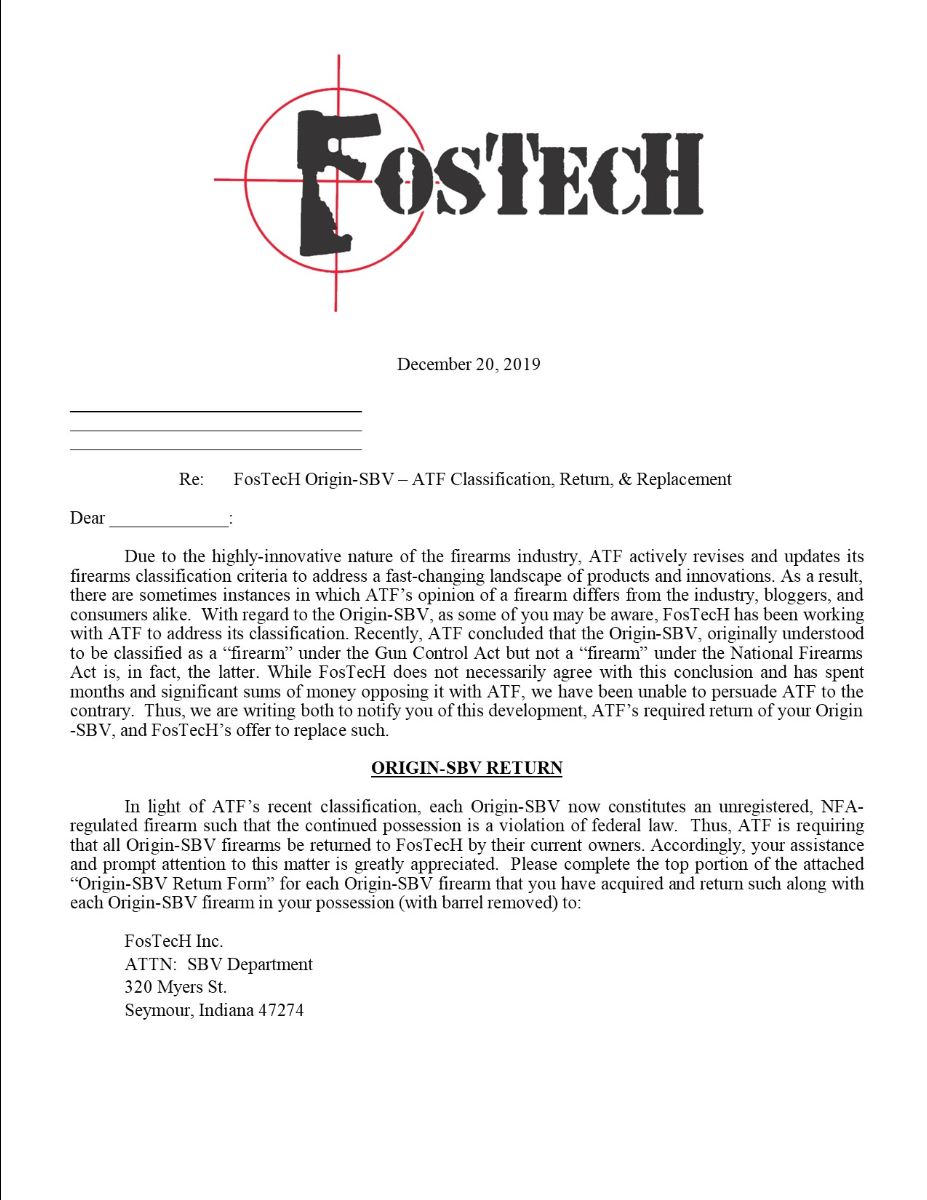 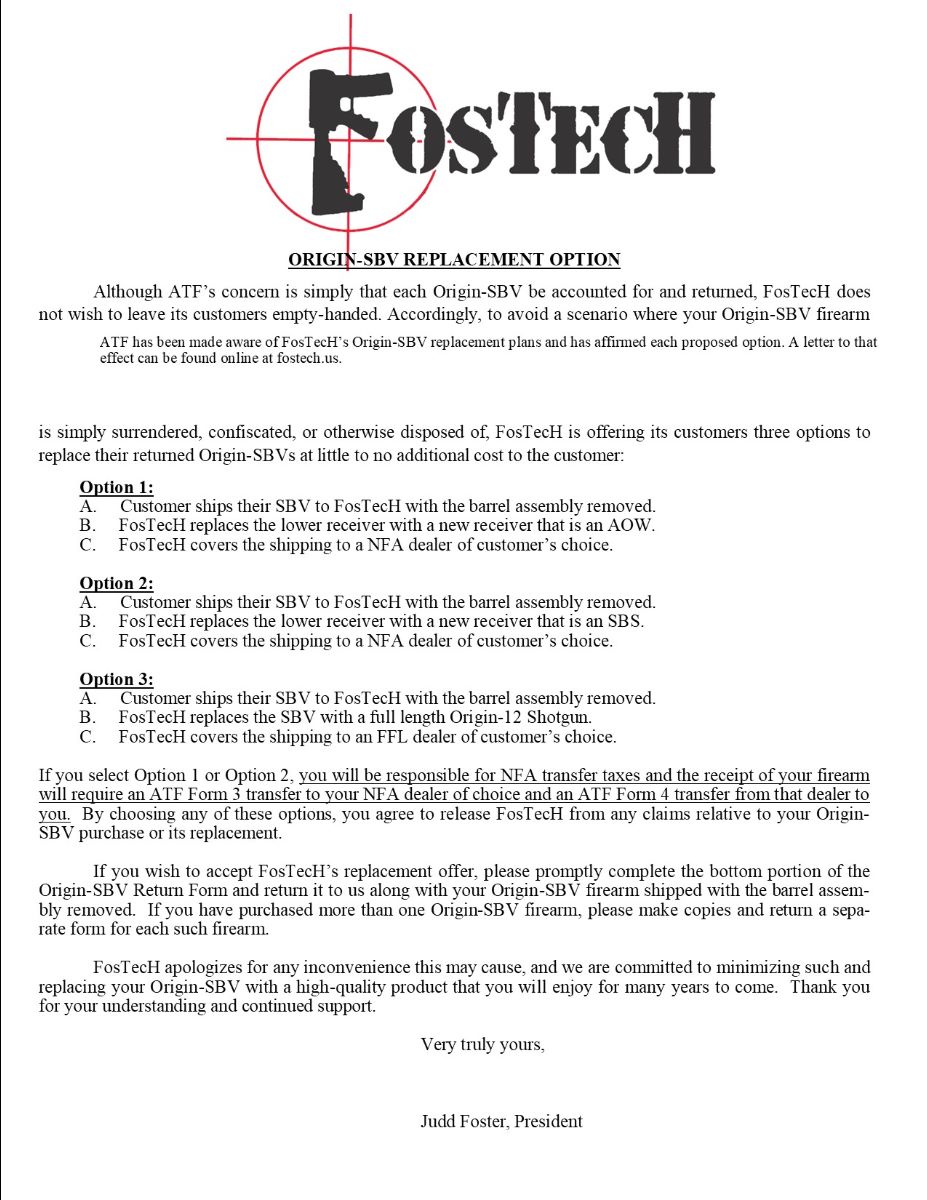 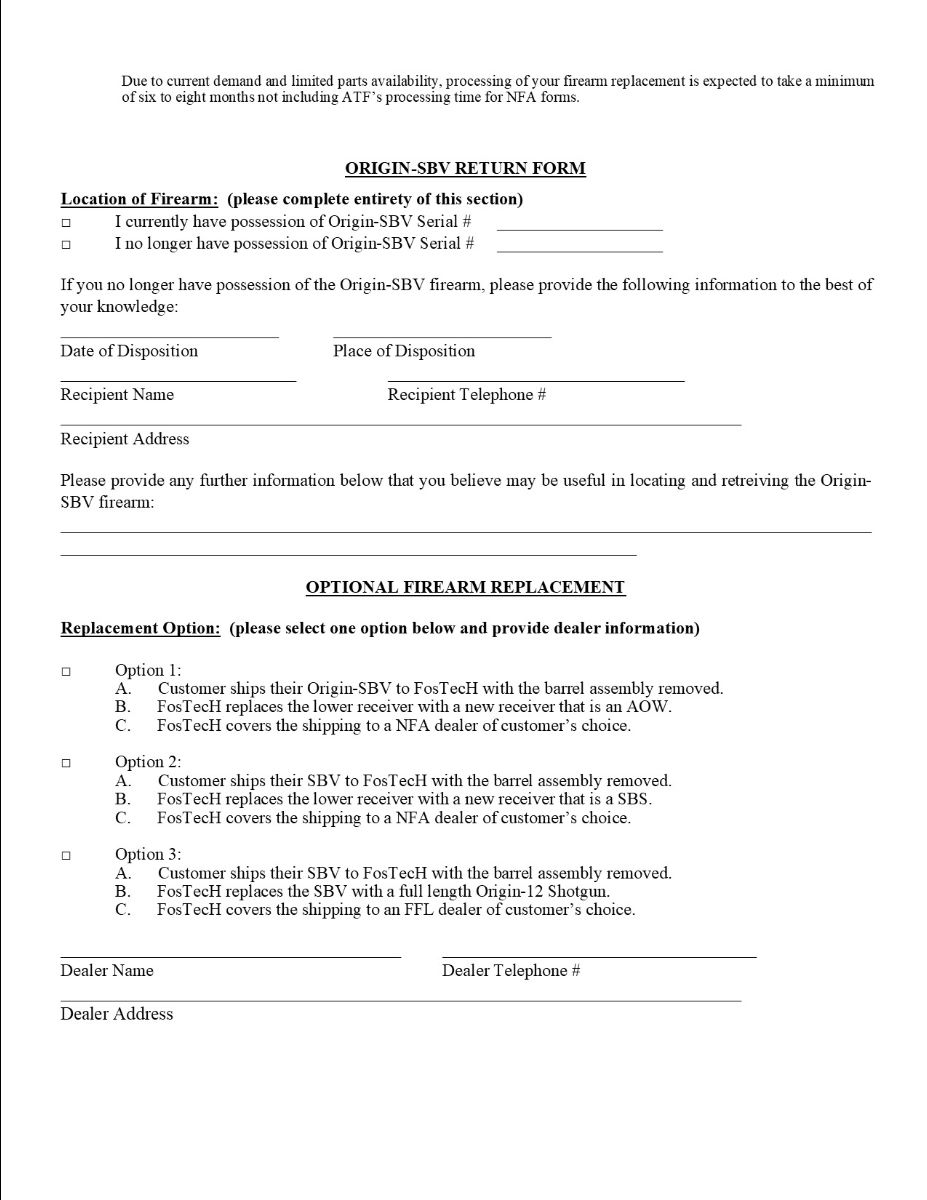 Please see the direction from the ATF below. This letter allows FosTecH the ability to offer to replace the SBV with another type of Origin-12 Shotgun. FosTecH is offering to replace the SBV at no charge to the customer. Customers will be responsible for all tax stamps and or transfer fees . FosTecH will cover the outbound shipping of the replacement weapon. 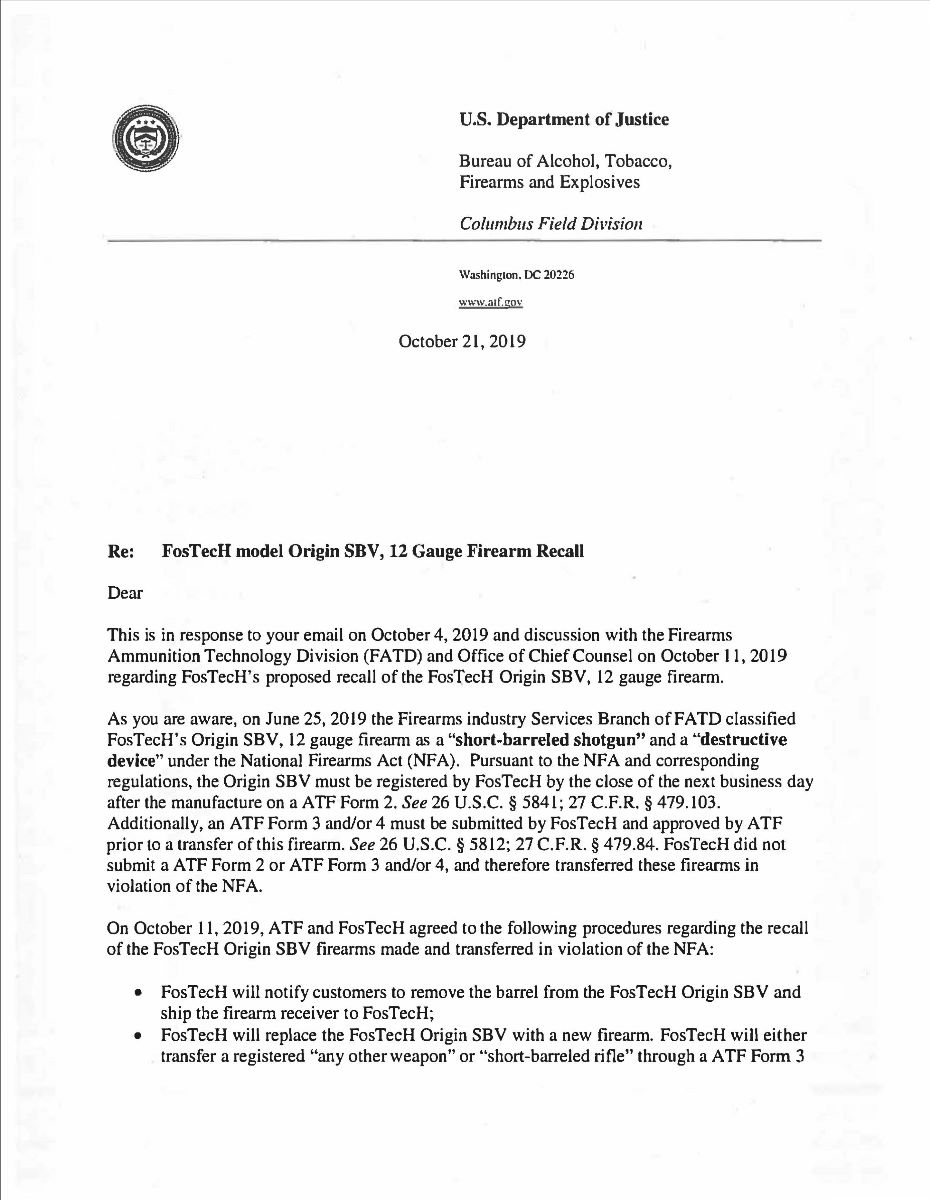 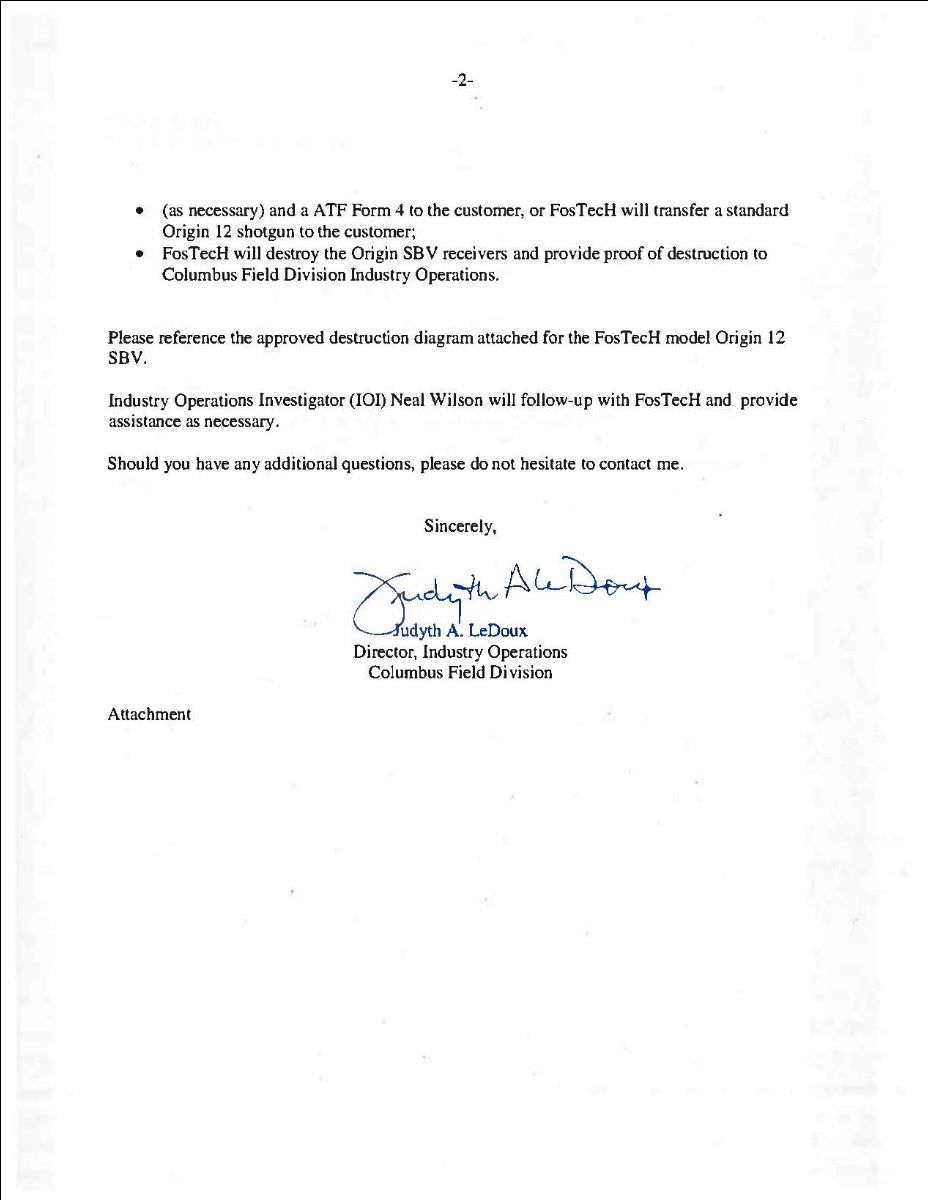 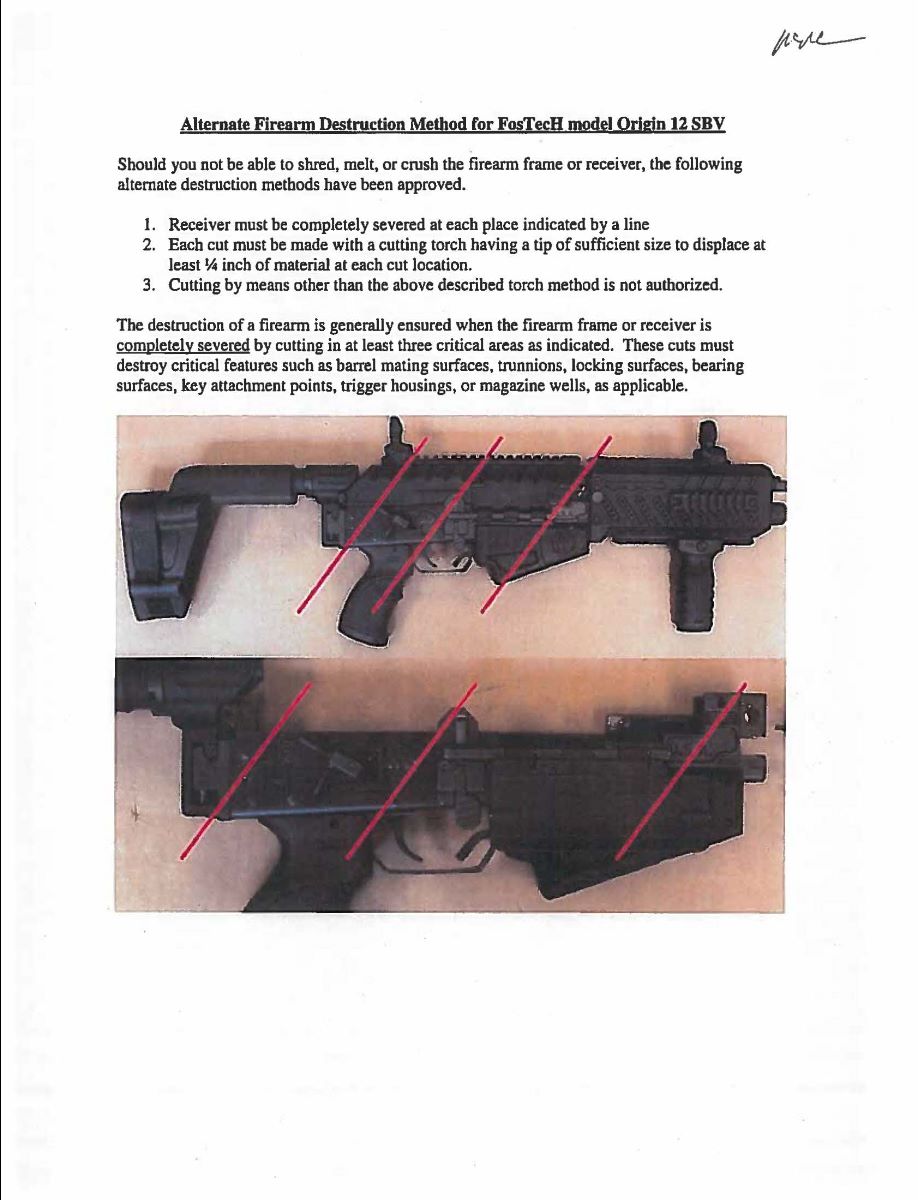 TO CUSTOMERS THAT HAVE PURCHASED A DELTA 5® RIFLE,

As part of Daniel Defense’s commitment to provide the highest level of quality and safety for its products, the company had previously issued a Safety Notification Replacement Campaign on October 8, 2019 related to a condition identified with the firing pin cross pin in DELTA 5 Bolt-Action Rifles manufactured before September 20, 2019. More specifically, the firing pin cross pin can break under normal usage.

As a Company committed to the highest level of quality and safety, Daniel Defense will correct any and all potential conditions at no cost to the consumer as part of its 100% Satisfaction Guarantee.

To determine if a DELTA 5 Rifle falls within the scope of this Safety Notification Replacement Campaign, Consumers should go to www.danieldefense.com/safety or call (866) 554-GUNS. 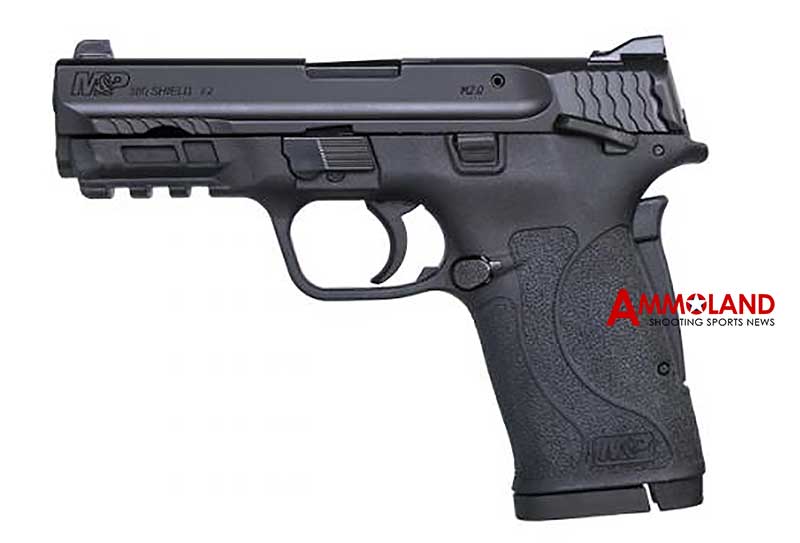 We have found that in very rare circumstances, ammunition that produces a high level of felt recoil can cause the manual safety to move from the fire to the “safety on” position during firing.

Maverick Arms has discovered that a small number of Maverick Hunter Over/Under 12-gauge shotguns (SKU 75445) have been marked incorrectly.