Thinking of getting one of these for my little one’s birthday coming up. Any of you guys have any experience with them. They look cool for a kid gun. Not sure if I should go with the Henry mini bolt instead though. 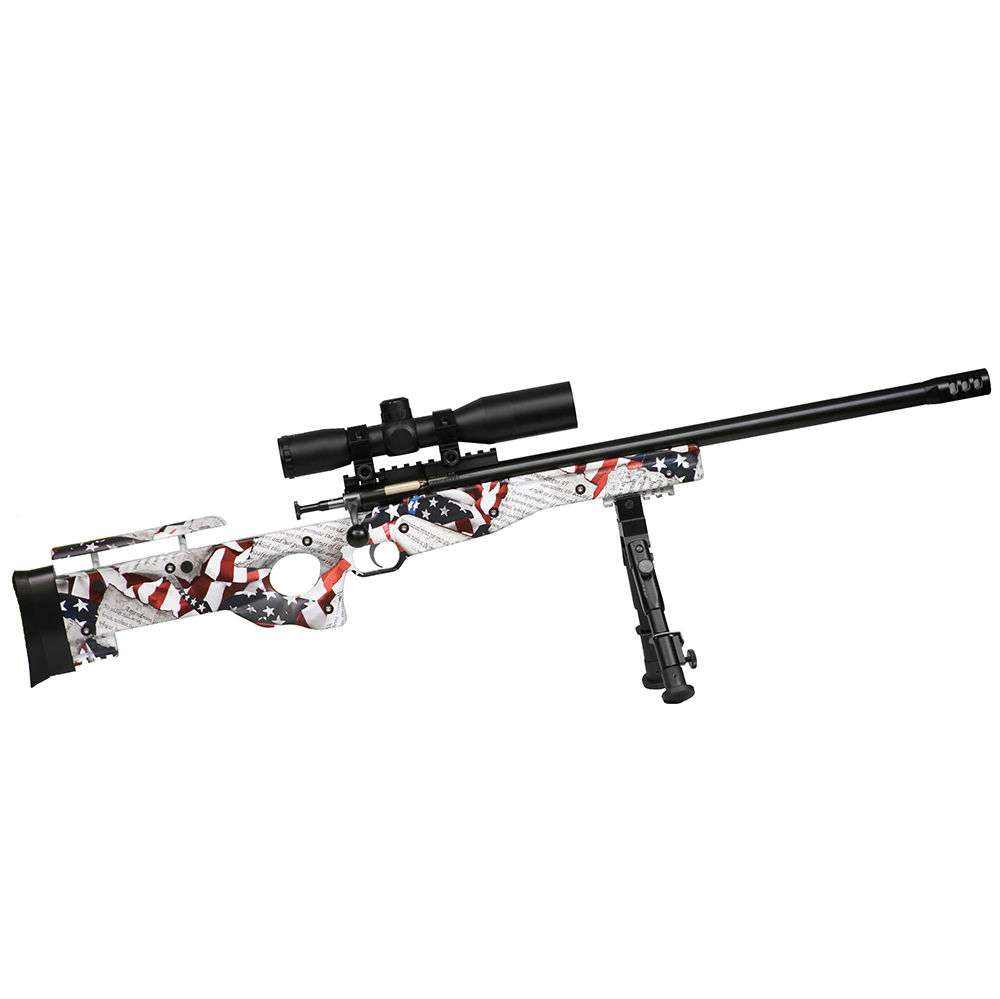 No experience with the Cricket, but I am a firm believer in a single shot 22lr for a first rifle. I see it has an adjustable LOP, that’s a plus as he (she?) won’t out-grow it any time soon. If you do go with this, I’d get the LOP kit at the same time.

Great choice if he’s going to be joining you at the range for some precision shooting.

If you’ll be sending him into the squirrel woods to plink … consider a repeater. At 6yo, I wanted a lever; I got a bolt gun and loved it. But … when the itch wasn’t scratched near 50 years later - I got my first 22lr lever and I covet it.

There may be something to starting with irons as well. I worry 'bout the generation that can’t drive stick and I think they missed out.

He’s turning 6, he currently shoots a BB gun with irons and a pellet gun with irons and he’s pretty decent. I let him shoot my 597 yesterday but the stock was too long for him. He loved the .22 though. I was hoping he could shoot my older sons old youth model .223 for the youth hunt but he’s still physically too small for it.

I have a couple .22 repeaters for when he’s big enough this would just be to get him braiding the gap until he can use a larger rifle effectively. Also this will be his first one with a scope so he can learn that skill as well.

Oh and as far as the stick shift goes. My older son (now 14) was driving and old Willy’s stick shift jeep at 5 years old. The younger one hasn’t had anything like that to drive yet unfortunately.

I dont have any personal experiences with the crickett youth 22 rifles. Everything ive heard or seen though has been positive. My old winchester model 67 single shot bolt action was my first shooting and im glad my great grandpa left it to me and its still my most used firearm. The single shot bolt for new shooters seems to be a great way to start because every shot has to be loaded and planned one at a time. So in my opinion it really helps to slow a kid down and let them learn all the fundamentals

Thinking of getting one of these

As other’s have said, a .22lr bolt action is good a place as any for an introduction to powder fired guns.

There may be something to starting with irons as well

I worry 'bout the generation that can’t drive stick and I think they missed out.

Agree, and then some. I think they’ve missed out on quite a bit more but the point stands. We reap what we sow, same goes for growing people.

I think a single shot, lever or bolt action are better choices for new shooters than a semi-automatic. As for LOP, the Browning BL-22 comes in a youth sized version. It is pricey but you will never regret the purchase. I have now handed mine down twice and hope I get it back when my Grandson starts building his own collection.

I’m with @Festus and @JoeFridaySays.

I would choose single shot.

have a couple .22 repeaters for when he’s big enough this would just be to get him braiding the gap until he can use a larger rifle effectively. Also this will be his first one with a scope so he can learn that skill as well.

So … I read that you’re spending time with the developing man. Kudos and thank you for doing this job right.

Whatever you choose, it’s the time that will make the difference.

Just a suggestion - start prepping him for an Appleseed. I haven’t met the young man, so I can’t say that he is or isn’t ready for a repeater or an autoloader.

I wouldn’t mind doing an Appleseed myself. Little man is in the deer stand with me as we speak. Still bow season but it’s also youth week that they can use rifles My older one is in another stand hunting on his own. We just have my old .22 mag for coyote or bobcat if it makes an appearance. 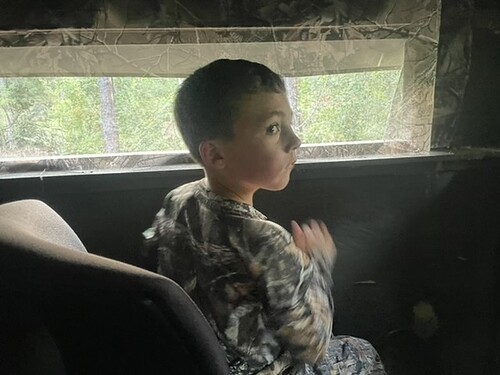 …has furniture. You big candy a$$.

Thanks for bringing that up Dave ! The only furniture in our deer stands grew from what God planted

I always thought the key was in the name…

Yeah I guess so, Normally I hunt a climber but it’s nice to finally have access to my 2 box blinds again. Much better for bringing the kids along or when it’s really cold (like under 45* here) and rainy. It’s been since 2019 that I’ve had a way to get to them with all the trees down from the hurricane.

I envy you guys with elevation and open woods and scenery to hunt. Everything is flat and stupid thick around here. Can’t even walk through most of it.

Stupid thick makes things very intimate and primal though. Ive shot two with bow under 10 yards. 1 of them only 5 yards including my elevation!
I hunt for that experience more than the meat, to be honest, but backstraps are a very close second place motivator😁

Yeah I guess so

I’m just givin’ ya guff, I don’t even hunt anymore.

It is amazing to see how much hunting has changed since I was a teen, just looking at the gear available nowadays. I imagine a lot of guys these days would think the way we did it was crazy.

start prepping him for an Appleseed

68 years old here and I want to attend an Appleseed (probably more than one - not an easy achievement.)

I started with Win 67A and still shoot it! Thinking about getting another and tricking it out with all the “modern” mods: chassis, scope or maybe competition irons, sling, bipod, etc. But I would never drill or machine my original rifle!!! Lol

looks better than my desk chair!

looks better than my desk chair

I lease 80 acres from a timber company to hunt on about an hour north of my house.

This is the stand in question it’s 10ish years old I rebuilt it a few years ago but hurricane Laura blocked my access until this year. We moved it and put it on 8’ legs. 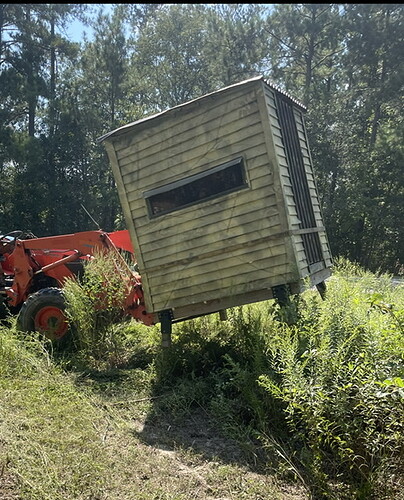 My bro in law has this stand on my lease but he never hunts it. It’s one of them fancy fiberglass blinds. 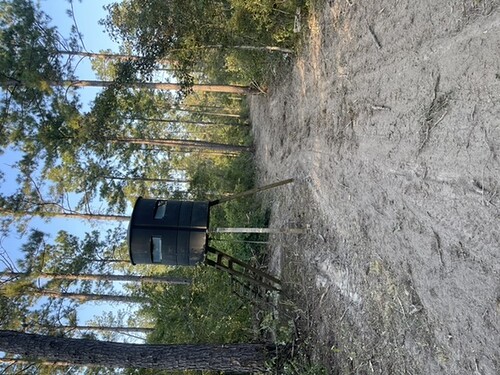 Also most of my in-laws have businesses so my brother in law always snagged good used chairs from them to stick in the blinds. He actually has an old hair salon chair in his other stand at his dads place. Talk about nice to hunt in but heavy as hell to get in there…