Just when I think I'm done

That review has me. I dont own anything in 9mm so ill have to wait and hope. I would think that, if they can do that with a 9mm, they ought to be able to get similar speeds and results out of about a 230 or 240 grain in 40 s&w. Thats assuming they want to. Like i said ill wait and hope. Id definitely try them.

Love it when the State dictates what you’re going to buy - Was looking at a PSA 10.5 at under $600, but because it’s manufactured as a pistol and not an “other firearm” it’s not legal in the communist republic of NJ. My only options for a quality SBR/PCC is looking like either a Troy A4 10.5" 9mm for $1375 or a Dark Storm Industries 9mm for $1K. Sucks because if I was able to, I could have gotten both the PSA & a WASR-M for less than the Troy.

Speak of the devil…

After reading all the good stuff about this type of bullet a few weeks ago, I orderd up several boxes of Underwood: 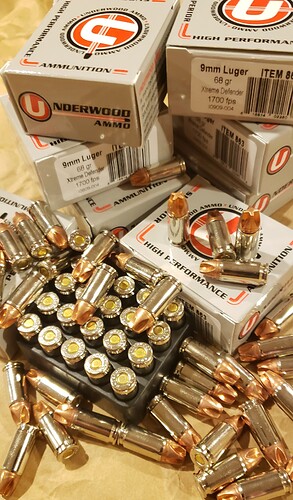 This round offers:
A permanent wound cavity (PWC)that is 2 times greater than any expanding bullet
Reduced recoil
Radial flutes that force the hydraulic energy inward to build pressure
Minimal surface area to increase the force at the point of contact and sharp cutting edges that defeat barriers

I knows I gots a bunch! Have some of their 7.62 controlled chaos, .300 maximum expansion and .40 subsonics.

They also to the extreme series in .458 blackout

I have the S2K (OF COURSE!) in 9MM because I already had 92 mags and 226 mags (both of which came to me through a friend’s estate). I then got two “large” Mec-Gar 226 mags - I carry the pair of S2K/226 in the trunk in a non-descript canvas messenger bag with several large pockets.

And yes - prior to all of that (and sometimes still) my best is my .357/.38 Marlin. I can work it without thinking and hit stuff all day long. A Marble ‘buckhorn’ rear sight gives me a (nearly) peep type configuration - the front sight just centers in the sort-of circle by the rear. The added benefit of the buckhorn is, it has a notch in the bottom, and the tips come together near the top, that gives you three aiming points without having to change anything.

I know, no magazine quick load, but for me it just hits without thinking about it. Plus no talk of can I own a rifle with a removable mag, or does it have a military caliber - even was never an American military rifle. All of those things have been proposed as laws, so…

I know, no magazine quick load, but for me it just hits without thinking about it

It’s okay brother @ColoradoRick, we’re with ya, we like lever guns here. A lot.

So I threw caution to the wind and am now the proud owner of a Troy A4. SUPER fun gun!! Will of course do some upgrades - prismatic scope (because my vision needs all the help it can get!) and maybe some color coordination. Very consistent out of the box - one adjustment on front post & 2 on the back and I’m real close to zero. Gonna recheck on a day that’s not so breezy to get it a little better, but was able to get a few on a 10" plate at 200 yds. before I ran out of daylight. 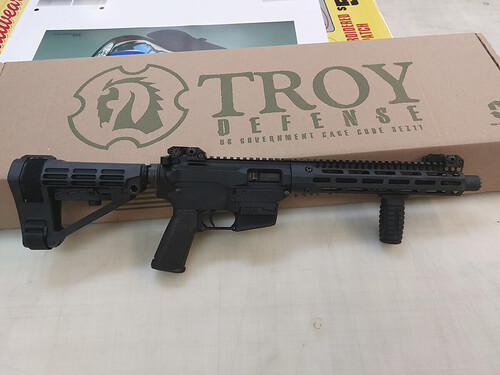 caution to the wind

Enjoy the crap out of it quick fast in a hurry. I spy an arm brace. We expect new ATF rule against them come December.

Rumor says NFA Amnesty to declare it a SBR may happen. Amnesty ain’t gonna help you in NewJersistan though.

Well, on the matter of lever guns, you would seem somewhat qualified…

I hunted with both and love both, though the particular Winchester I used has a special place, it was a saddle gun belonging to my grandfather. Long time ago and I don’t have it in my possession, but I know it’s in good hands and still in the family as well (as is his hunting cabin).

but now I just pissed off some good folks here

Nah, ya like what ya like, it’s all good. Currently I only own Henry lever guns, some folks aren’t big on the brand, it’s okay.

Kind of have an itch for one chambered in this. Preferably with a 16" barrel, hard chromed all weather treatment and maybe some blackwashed furniture. Not that I’ve given it much thought…

Cowboy shooters go Marlin vs. Winchester like Ford vs. Chevy. Mostly good-natured. I started with Marlin, and like them because they’re simpler - the lever end goes right into the bottom of the bolt - and they side eject in case you want to put on a scope. I have seen an empty case ball back into a Winchester, but it’s not like it happens every day. I have used Winchesters, especially my friend’s .38-55 - I say you have to be a bit more deliberate when working the lever on a Winchester. Maybe because of the linkage?

The .44s I’ve had always seem to get hung up, no matter what ammo. I have a friend with the 336 model rather than the cowboy 1894 model, and it seems to work better. But it’s just one of those things - another friend has a '94 in .45Colt, and it will feed any shape of bullet. In my .357, I load a 180 grain cast truncated cone which feeds and shoots just fine.

Henrys are pretty much Marlins. The other year, I was an RO at the NRA championships. All stages had guns and ammo from sponsors - there was a cowboy stage with Henrys and Federal ammo. The only problem was with the ammo style - there was a lip right at the edge of the cartridge case. It would get hung up, just like other lever guns. The fix is to back it up very slightly, then close the lever again. A lot of these newbies just tried to force the lever shut, and some of the extractors broke. They were being pressed against the rear of the case. But in normal use, they had no problem. All American made from American material, and I’ve heard my friends say that the customer service is outstanding.

But in normal use, they had no problem.

I run mine, but they’re also well cared for, no issues to speak of on functionality. I doubt I’d be at the level of use/abuse of competition shooting but it’s nice to know they held up fairly well. I’ve had issues with some brands of ammo being a bit “catchy”, like you said, essentially slight back pressure on the lever before going again does the trick.

All American made from American material, and I’ve heard my friends say that the customer service is outstanding.

I can personally vouch for this, and on more than one occasion they’ve sent me parts for free when I inquired about purchasing them. I would have never considered or suggested such a thing but they just did it. Who does that anymore? If there’s a problem, they genuinely want to fix it and it would seem that every one of their CS reps is well versed on their products.

can personally vouch for this, and on more than one occasion they’ve sent me parts for free when I inquired about purchasing them. I would have never considered or suggested such a thing but they just did it. Who does that anymore?

Ruger has done it several times for me.

Ruger has done it several times

Good to know, though I can’t say the same. I have no issues with Ruger and have owned/do own a number of their firearms (and like them quite a bit), but I couldn’t even get them to sell me a handguard for a Ruger firearm that I owned. Still don’t get that one.

And speaking of Ruger:

New Firearms for 2022 All Firearms

Was not aware this was a thing, either. Interesting. https://ruger.com/products/sfar/models.html

Henrys are pretty much Marlins.

Brother Rick has been smok’n the good stuff 'gain. Reads like he’s quoting some dude squatting in a white house.

Seriously … side gate loading (new to Henry) is nice but features don’t make a Marlin.

As a Cowboy Action Shooter I would not have a Henry except as something pretty to hang on the wall. I started with a Marlin 1894 in .357 and ran it hard over the past decade. Well over 15,000 rounds if not 20,000+. I forgot to clean it for a couple months at a time still ran. Got wet, ran. Dust storm, yup ran.
Guy showed up at the range a month or so ago with a brand new Henry. Made it through 4 of the 6 stages and had a catastrophic failure.
I currently run a Uberti 1873 in .45lc. but I still keep that Marlin handy as a backup.

Ah, I see how that reads now. I meant internal workings, Henry is a lot more like a Marlin vs something else, like a Winchester. I didn’t mean the two companies, for instance. I am trying to remember the last time I bought a Marlin, or who was making them then. I know a friend of mine gave me his .45-70 carbine back in 2016, and I know the guy he bought it from, and when, but I don’t know when it was made or where. Been thinking about driving to Vegas and having Wild West Guns turn it into one of their take-downs.

I’m curious to see what people have to say about the new Ruger Marlins. I think I’ve said it in here before - the last three Ruger products I bought all had problems, and that was before 2020.

They’re expensive. I have no actual experience though lol, I have yet to see a Ruger made Marlin in the wild.

Surely you didn’t get into firearms to save money. None if this s#!t is really cheap.