How many here are race fans? Big weekend if you are - Monoco Grand Prix & the Indy 500 on sunday (and the joke that is NASCAR)
So many great storylines at Indy - Scott Dixon set a record becoming the 1st 5 time pole winner & the 2nd fastest qualification in Indy history (hit 242 enter turn 1 on his first couple laps, jeez!), Helio Castroneves could become the 1st 5 time winner, 7 time NASCAR champ Jimmie Johnson in his 1st Indy 500. Should be an exciting race.

A young Indian maiden went to a new doctor for a checkup.

Upon seeing her undressed the doctor exclaimed “That’s amazing…you don’t have any nipples!”

She replied “None of the women in our tribe have nipples.”

He said “That’s the most amazing thing I ever heard”

The maiden then said “I’ll tell you something more amazing than that. There is
always exactly 500 women in our tribe. If a baby girl is born the oldest woman in our
tribe instantly goes to the promised land.”

The doctor replied “Now that IS the the most amazing thing I ever heard! What tribe
are you from?”

To which she replied " The Indiannippless500"

I’ve never been able to get into Indy or F1 racing. I might turn the 500 on if I have nothing to do Sunday. I will put more of an effort into watching the Coke 600 lol. Some of my favorite racing I’ve seen this year is MotoGP. For the first time in a long time, it seems as if every manufacturer is competitive.

I try to never miss those races!
Although Monaco is seldom a good race probably more so this year with the 2 meter wide cars, going to be difficult to pass on those narrow streets.
I love Indy cars and recently Indy racing has been going through a renaissance so be sim looking forward to that race.
NASCAR just continues to shoot itself in the foot and drive core fans away. When the TV contract is done they might be in trouble.

I hear ya - I’ve never been a big F1 fan, but just turning laps around Monoco at speed is impressive and I totally respect that, even if the race itself is usually decided on the first lap. Indy is gonna be the race of the day for me. A LOT of potential winners in the field.
NA$CAR is an f’in joke at this point and you couldn’t pay me to care or watch that crap anymore.

just turning laps around Monoco at speed is impressive

You can say that twice. Been to Monaco once. Walked the track a couple days after the race. Tire marks are telling.

The cray cray of that adventure were the private vessels still in port. Money like I cannot imagine. Well, the real cray cray was rescuing two coeds I was charged with who had accepted an invitation out. Getting picked up in a supercar loses its luster when your walk of shame starts in Monaco to your hotel in Nice (faculty chaperone to undergrads doing study abroad).

I’ve never been able to get into Indy or F1 racing.

That’s likely because, due to any number of reasons, you weren’t able to watch the sport at its best…this is Formula 1…

I was born a bit too late, but if you like auto racing, check out the older stuff. CanAm and USRRC as well. Jim Hall, anyone (shout-out to Midland TX)? 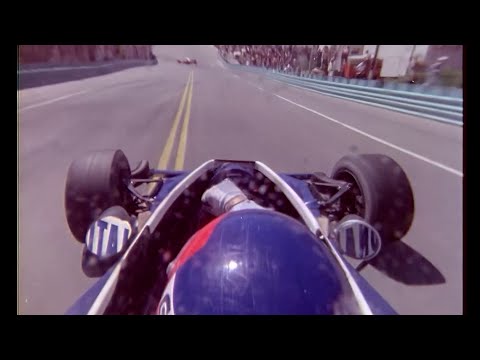 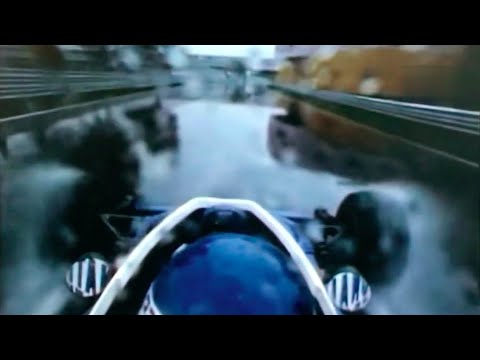 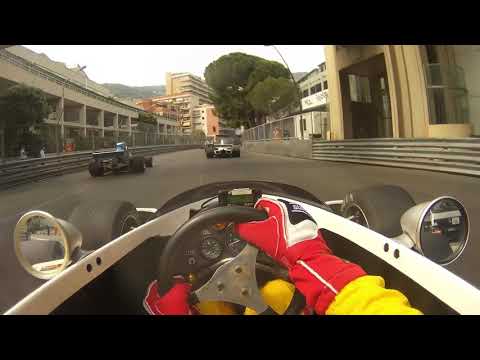 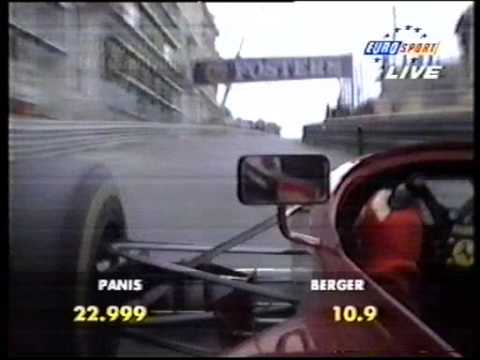 Forgot the racing commentary. I’m a fan of cars and driving. So … I watch F1 the way a chess master watches a chess match. This sport often requires several laps and steel nads to execute a single pass. Fun to watch when you can read what the drivers are plotting.

I like some Nascar - specifically the events raced on tracks with right turns and left turns.

Indiannapolis ain’t my kinda racing, but Indy Cars are awesome on road courses.

They have gotten absolutely massive, haven’t they?

I think they should get rid of a bit of the aero, make the cars smaller to promote close racing and driving skill, and let the drivers be drivers instead of corporate billboards and mouthpieces. I’m not knocking the likes of Lewis Hamilton, but he’s no Fangio, Senna, Villeneuve (Gilles), Lauda, Clark, Sewart, Surtees, Hill…he could be, I suppose, but these cars don’t allow for it…and neither does the “F1 industry”.

That’s all you needed to say!
The man could drive anything.
Todays F1 is very different from his era. Too much technology, too much money, too many rules all to the detriment of racing. The one item in F1 they really irks me is the damn DRS, hate that concept and it needs to go.

The man could drive anything.

Fun fact:
John Surtees , CBE (11 February 1934 – 10 March 2017) was a British Grand Prix motorcycle road racer and Formula One driver. On his way to become a seven-time Grand Prix motorcycle World Champion, he won his first title in 1956, and followed with three consecutive doubles between 1958-1960, winning six World Championships in both the 500 and 350cc classes. Surtees then made the move to the pinnacle of Motorsport, the Formula 1 World Championship, and in 1964 made motor racing history by becoming the F1 World Champion. To this day Surtees remains the only person to have won World Championships on both two and four wheels. He founded the Surtees Racing Organisation team that competed as a constructor in Formula One, Formula 2 and Formula 5000 from 1970 to 1978. He was also the ambassador of the Racing Steps Foundation.

Went to Indy racing at Sears Point. More of a parade than racing.

Yep, after winning the world championship on two wheels a few times, he got bored and decided to try it on four. Sharp guy as well. I got to see some of his machinery at the racing museum at Barber (have photos somewhere).

That’s all you needed to say!

The man could drive anything.

Can and did! Even won the Indy 500! All that from a humble Scottish sheep farmer.

His “feel” was alien level. Apparently he could sense even the slightest issues in a car, like a wheel bearing that was flawed, pretty sure there’s a documented incident of this happening. He noted something didn’t feel right and when the mechanics tore the car down they found a wheel bearing was slightly out of spec.

He was also easy on the equipment, a true finesse driver. Probably a good thing given how fragile Chapman’s creations could be (light weigh and fast, but frail). The mechanics noted the difference in condition between a car driven by Clark and the same car driven by someone else (likely Graham, a fine driver in his own right) at the end of a race. The brakes, clutch, even the tires would often be in much better shape on Clark’s machine. The combination of feel and mechanical sympathy, it was his gift and I wish I had an ounce of that special stuff.

The combination of feel and mechanical sympathy, it was his gift and I wish I had an ounce of that special stuff.

All true, he was my hero as a kid in London. Brands Hatch was my local track, my dad used to take me to races there. 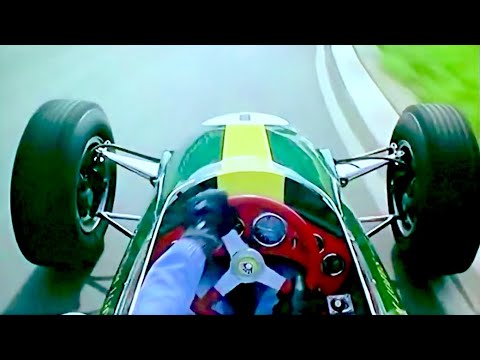 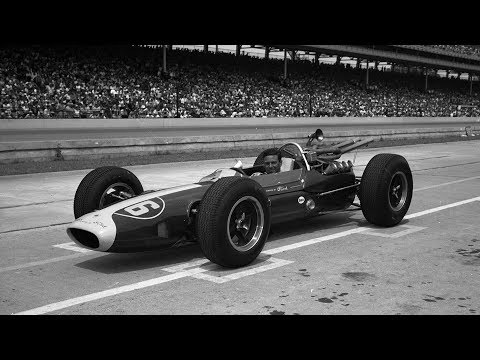 Great circuit with serious history. Great Britain likely has some of the best road racing circuits in the world, and quite possibly the most per land area (Brands, Donnington, Silverstone, Oulton Park, Cadwell Park, Snetterton, Castle Combe, Thruxton, Croft, Anglesey, Goodwood, to name a few). We still have some here, but a number of the greats have been killed off or castrated by urban development. Me, I’d take a Bridgehampton over a golf course or a Riverside over a mall any day (and twice on Sundays)…but I don’t play golf and hate malls…

Speaking of the Lotus 49 Ford and Barber… 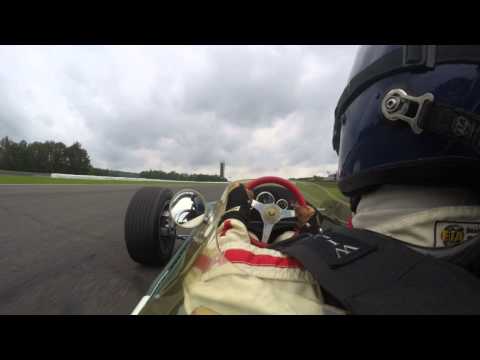 I was fortunate to have done a few laps at this track, beautiful facility (you can see the aforementioned museum at 0:52 in). But I also got to do some laps at Talladega, and while not a massive fan of ovals and NASCAR (like @Dred, I love it when they hit the road courses, and I know the drivers do as well

), I get it. Driving with some speed around a super speedway was a rush and an experience I’ll not soon forget. That banking!

Speaking of the Lotus 49 Ford and Barber…

I also got to do some laps at Talladega

Barber is just down the road from me yet I’ve never visited. I need to remedy that situation.

Barber is just down the road from me yet I’ve never visited. I need to remedy that situation.

You DEFINITELY do! A little tip, go when the museum isn’t so busy and chat up the security personnel, they might just take you down to the garage level and give you a personal tour of all the machinery in the shop as well as storage… just ask lots of questions and refer to the cars you can see at the bottom

. Every employee we met clearly loves working there and they speak of the namesake in almost saint-like ways. Allegedly, aside from being a decent employer, Mr. Barber has the largest private collection of motorcycles in the world…and I can tell you he probably only has half of them on display. Great collection of race cars as well…and even an Alligator motorcycle or two (for the Gurney fans…and who isn’t?).

Nope lol. I am glad to see that Indy added the halo, this could have been fatal years ago