The front sight hits the stock when i fold it. I installed the Mcarbo buttstock pad and needed to extend the stock to the longest pull. When i fold the sub, it hits the side of the stock and appears to be putting pressure on the abs around the hinge when i push it into the proper closed position. Is there an adjustment i’m missing?

Your experience is not uncommon. Hopefully someone remembers some of the threads that have detailed fixes/solutions and can link you to them. I can’t think of a search that will land you on them directly. Sub 2000 Front Sight will get you to them, but we do a lot of talking 'bout front sights.

The front sight is notoriously famous for not being set at exactly 12oclock from the factory. Mine still cleared the stock, but needed windage adjusted by rotating the front sight a bit.
Heres some good discussion to read up on.

I have been asking if there would ever be a replacement ring for the front post if you have a Red Dot like I have and I been told that it is research. With that and with the spring in the front sight breaking I decided to remove the front post. Well let me tell you - that ain’t happening. That sucker is on with something. I used a propane torch to heat it up to remove it and that don’t work. So I did the only thing I could think of. Dremel to the Rescue. The post is aluminum and I cut it off …

I ran into this issue when installing the MCarbo rear notch sight. The rear sight allen bolt needs to be tightened quite a bit for the sight to fold correctly and at the same time fixed my folding alignment issue.

Any idea of a torque spec?

Good question… When that allen bolt is completely loose you can see a gap in between the rear sight post and the frame slot it goes down into. I just tightened the sight post until that gap closed up and a little more after. It seemed to fix my folding alignment well.

@Charlievee welcome to the forum

I am also having this problem, with the factory buttstock. The fins on the front sight hit the top of the buttstock consistently on the left side when closing. As a result, the left side of the buttstock is collecting nick marks, and the left fin of the front sight might be showing a tiny bit of wear (not certain). There is now a bias in the closing motion that causes this impact. It can be avoided if I close the gun slowly and carefully push the barrel to the right. This started after I took the new gun to the range for the first time. It did not do this before I fired the gun.

I thought perhaps the hing bolt needed to be tightened. I tried that, and it seemed to help some. But it loosed after a few open/close cycles, and the original behavior returned.

Also, I noticed the peep sight no longer deploys to the upright position consistently. I often have to rotate it into place after opening the gun. I don’t recall needing to do this when the gun was new and unfired. Its behavior seems to be determined by the hinge bolt tightness.

Is there a torque spec for that hinge bolt? I started to torque it to 10 in-lb, but I backed off immediately because the wrench didn’t trigger “soon enough” to my feel.

@Enzo Hey Welcome! I could give you my long winded answer, but it’s basically the same as Chris video on the Rear Tactical Sight install that should help your problem. I have used his sequence in tightening that hinge pin and has fixed the same problem you’re encountering with your rear sight not lining up… It should fix your alignment as well when folding the rifle.
https://youtu.be/jMON4gel6PQ

@00Buck Looks like this is exactly what I need. I’ll work it later. Thank you 00Buck!

I hope it works for you Bud… Keep us posted!

The fix worked exactly as advertised. Thank you @00Buck for the video link, and Chris Nelson for his thorough instructional videos.

@Enzo Dude… Awesome to hear! Side note: I’m not sure if you have a MCarbo upgraded rear sight, it comes with a steel hinge pin. The stock pin is AI and is prone to stripping. Just letting you know

If anyone is looking for a folding front site for their sub 2000, red lion precision has them in stock again. 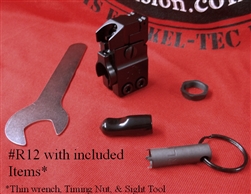 I haven’t even got my in-stock notification email yet.Hadn’t even checked my email yet. So thank you for posting.