Big news this month! We’re offering a genuine, for real, M*Carbo Gift Certificate for the first time ever.
Let’s have a huge round of applause for @ChrisNelson without this would have not been possible and @Kona for his efforts in securing it.

So, with that let’s make like a real match as best we can. Shoot as many divisions as you wish. But. And this is a big but or is that butt…print only one target per division. Turn in what you shot.

Now let’s look at targets. our standards will be allowed and we’re adding a new one for this month.
Ever play darts? Yeah, we’re going to play a simple game of darts, for those that want the challenge.

For the dart board, you will be allowed to modify it, as illustrated (alternate the red/green all around as shown) if you so choose to do so. This game many have another name, but we called it “Around the World.” You start at 1. Notice the +2 and +3 in the green or red areas, this is important. The grayed areas are +1. So, if you hit the gray area of 1, you move to 2. Hit the Green +2, you move to 3. Hit the red +3, go to 4. But you must hit in the 1 field. Your shot must be 80% within the field, or it’s a miss. Keep shooting until you’ve scored a one, or until you’ve used up your 5 rounds advancing around the board.

EDIT for clarification: As the scoring is mis-understood, I have made an illustration that should help.

You will ask, why is OC scored a miss. In darts, the wire of the board would deflect that “round” and push it away from the higher score.

Hot damn! Thanks @ChrisNelson and @Kona for doing the gift card!

Unfortunately I can’t do live fire this month

, but I’ll still do digital. Regardless let’s all have fun! Thanks again and good shooting everyone.

Im not a dart guy, but think im following along.
However, might need a spotting scope to figure out follow up shots, or if i hit the 1…

Where does one find a rubber nickel? Asking for a friend…

Folks, I’ve played this dart game. It is really going to be interesting because I suck at darts.

As mentioned… and when I played with darts.

This target is a chance to break out of the 5 shot limit.

Rules of Play: The object is to hit every number on the dartboard target from 1-20 ending with the Bullseye. Any part of the number (within 80% of that number counts) - single, double or triple - counts. The numbers must be hit in order, because your playing alone target… you can keep shooting until you miss the next number. If you cannot pass a certain number. So when you start with 5 rounds to hit the one (1) if all five (5) are considered a miss then STOP. If you hit the one (1) you advance to two (2) and so on to twenty (20). If you hit all the numbers in order up to 20, then the final target is the bullseye, counts for fifty (50 points).

Suggesting… we keep advancing around the clock in sequence until a miss. A perfect score would take twenty-one (21) shots.

Being a newbie here, can someone tell me what some of the shooting division codes designate? A A1 B B1 is this for rifle, pistol or either? On B/B1 what is PCC? I’m assuming that the “HG1 & HG2” are hand gun only categories? C through E are obvious. Thanks in advance.

Where does one find a rubber nickel?

I thought I was pretty clear. What part of “out of your ass” are you not understanding?

. So what you’re saying is I need to eat it and wait. Got it

Being a newbie here, can someone tell me what some of the shooting division codes designate?

Sir
Check out the link within the Blue Banner at the top of this (and other) post. 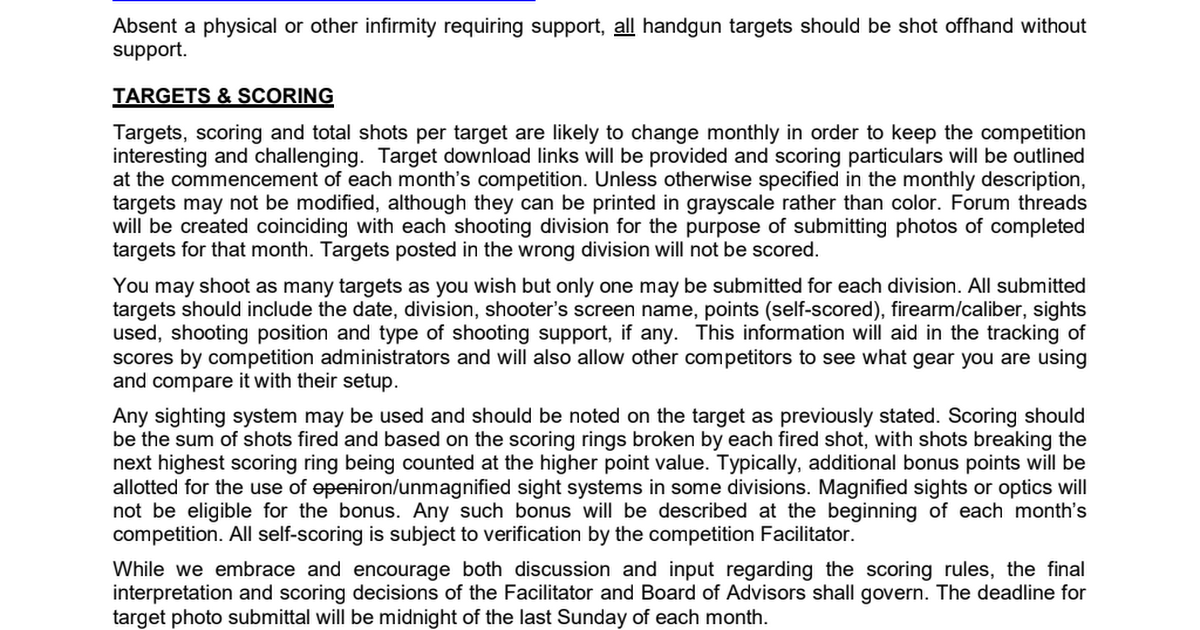 So my limited mind figured out that PCC = pistol caliber carbine (duh). Still not clear on what firearms for A & B

I have edited the OP and included an illustration, hope this helps.

The way I see it

I knew you’d come thru.

I was a part of fellows that got together Friday nights and played darts, drank beer and well…we had a good time. It would be too confusing to allow more than 5 rounds.

can someone tell me what some of the shooting division codes designate? A A1 B B1 is this for rifle, pistol or either? On B/B1 what is PCC? I’m assuming that the “HG1 & HG2” are hand gun only categories? C through E are obvious.

Thank you Festus for clearing that up!

Thanks for the info!