PSA time. Check your gear for function! Today while running the dhg mail in match I found my surefire x300u-b is dead in the water.

So folks, check your gear, change the battries, check for broken components.

I was going through some of my gear the other day. Cameras, gps, etc.
Made sure all the batteries were charged, I had all my cords, and everything passed a function test.

Don’t you just love it when everything works just like you expected it to! It tends to make your entire day go better & happier.

I regularly use a variety of holsters for carry and competition. The 1st day of each month is “Check your holster screws days”. Have a little Blue Loctite out just in case.

How many have you found work loose even after the blue is on em?

I have noticed a few loosen up mainly with my leather holsters. Leather expands/contracts(?). The Kydex… not so much.

Nothing loosened on my holsters, but they are all kydex, with cleaned and loctited screwes. Scope rings? Yes damn near every time on my ar6.5 with blue loctite. Went with red now.

Going to change out all optic battries tomorrow night. For those with rmr’s, how far off did you have to re-zero when you swapped battries?

I emailed surefire, no response. So I’ll call tomorrow.

Got response yesterday late afternoon. Got rma #, had to pay shipping, but don’t mind as I dont recall how long ago I bought it.

Luckly they are only a hour and a half drive away. I would have dropped it off myself, but would have spent 40$+ on gas.

Going to change out all optic battries tomorrow night. For those with rmr’s, how far off did you have to re-zero when you swapped battries?

I run the Holosun HS507K-X2. Has a couple features I really like.

PSA
Check your ammo in loaded magazines routinely. I found this Hornady JHP recently in an EDC mag. Guessing it had been in there for over a year. Not good. 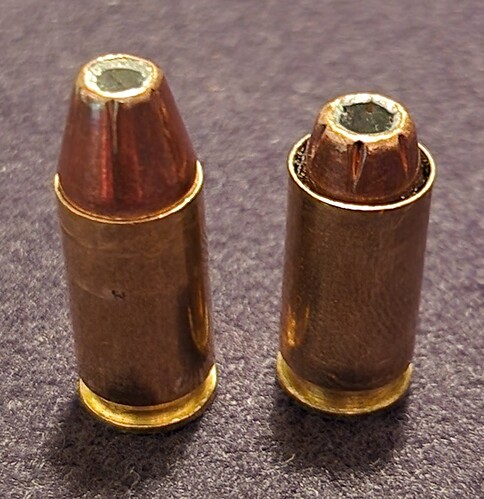 @TexasEskimo New phone, who is this?

Really bad bullet set back you have there. How many times did you load that bullet in the chamber, a common occurrence with LEO unloading their firearm every night when they get home & load in again in the morning.

It actually looks like it was impacted against something. Look at the tip of the bullet, the copper jacket is starting to expand at the seam (or what ever you call it).

Yeah…the top has definitely been impacted.

How many times did you load that bullet in the chamber

Probably a lot. In the past I had ALL my magazines loaded with JHP, and would empty a few before going to the range. Then I reloaded the defensive rounds when I got home. Too much handling I guess(?).

Since this issue I now have dedicated magazines for EDC versus the range.

Look at the tip of the bullet

Maybe… it was just cold out. As men, we could relate to that. 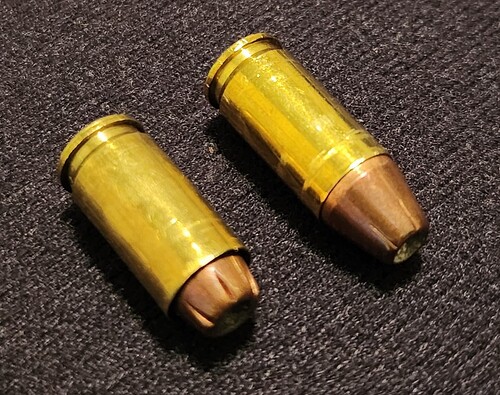 But your in Texas with year round summers. There should never be any reason in texas for that much “shrinkage”

never be any reason in texas for that much “shrinkage”

He’s in the yankee part of Texas. He might even see a couple inches of snow up there.

FWIW… I individually checked 285 Hornady hollow points. Easily spun the tip of the bullet out by twisting with my fingers on 21 of them.

All these were purchased 2 to 3 years ago.
The 264 are going to be range ammo and I am going to start replenishing box by box.