I just put on my mcarbo tube covering, and now my sub 2000 will not assemble properly. I get everything done, but the bolt will not move back the inch and a half like it is supposed to in the video. The spring is so far out, it is absolutely impossible to put it back in and put the butt pin to lock it. Even if I manage to do that, I’m pretty sure it would not work. Haven’t even fired the damn thing, and I can’t even reassemble it. Talk about a pain in the ass and I’m looking to just sell the damn thing and get something different. Any help is appreciated. I’m a newbie, so I am not able to disassemble the whole gun and put it back together again. I’m really frustrated and spent five hours trying to figure this out.

1st off, Welcome to the brotherhood @Stevo777 .

If i had to guess, im going to say you need to push the hammer down to let the bolt go all the way forward?

@Stevo777 I am also new to shooting and this is my first rifle. I put several M*Carbo accessories on mine before even shooting it. Very few of the accessories went on as smoothly as they did in the videos…lol. I figured it was just me since that’s what usually happens when I attempt to “fix” something.

However I experienced the same issue with the bolt not dropping when I disassembled my Sub 2000 and went to reassemble. Took me a while to figure it out. No where in the manual does it say to do this, so others in the forum may know something that will help both you and I in the future.

Anyhow, this is what I did… I stuck my finger in the chamber and pressed down on the hammer just enough and the bolt dropped into place. Sounds stupid, but it worked.

Once reassembled, the next day I took it to the range (also where I purchased it) and had their staff disassemble it and the same problem occurred. Then we used their display model, took the bolt out of that and tried it on my S2K and the same problem When they reassembled the display model, they too had this issue. Perhaps the bolt needs to be machined slightly. The gun functioned properly and I had a blast shooting it for the first time… about 150 rounds with no failures. By the way, before I shot it, I pulled the bolt out 3 more times and duplicated the problem, slightly pressed the hammer and it dropped into place. Was easier once I knew how to do it. Now hopefully someone here at M*Carbo Brotherhood knows something different and can offer advice.

My problem is that I still hadn’t put the muzzel brake accessory on and “attempted” that yesterday only to fail. And from what I’ve read about my issue, I may need a gunsmith to assist or send in for repairs.

@Stevo777
Welcome to the show. You’ve come to the right place for help.
If you’re still having issues post some pictures we are having problems and we will walk you through it.

I can’t get my finger front of down the barrel to push the hammer down but are use it all rotten just break it down you should already push through do you hear it clicking place.

Isn’t it true that if you rack the charging handle and put on safe you wont have to use your finger or the dowell etc.
Bolt may still hang up a bit and need a smack?

ttps://www.youtube.com/watchh?v=2Mx-wN7l3DY
Is this the condition you are having.If yes this fix should help you.

It’s when you’re putting it back together, put the charging handle in, it will not move back the inch and a half like it shows in the video. There’s a video out there that shows pushing the hammer back with a wooden dowel, but the safety button is removed (47 second clip). I literally just took it down to put on the tube cover and it won’t budge. I don’t want to bang or force anything. Maybe I’ll try and take pics later tonight.

@Stevo777 I’m pretty sure that banging it is gonna solve your problem. It did for many of us.

Thanks for the welcome. I’m pretty sure what you described is the problem. I get the bolt set in, and then put in the spring, well oh, the spring sticks about 4 in out past where the buttstock ends. I have set at the farthest position back. There’s no way I can get the pin in, to lock it in place. The one 47 second video I saw, looks like it might solve my problem, but I don’t want to take the whole thing apart, considering I’m not down with reassembling it again. I’m more pissed off that this is a problem, considering it’s the first time this has been taken apart, only to put a tube covering on and adjust the stock. Very frustrating as a first-time owner of this kind of weapon. Has to be soured on it right from the get-go, without even firing a round.

@Stevo777 Between your problem and the stock site picture I felt the same way.I was gonna sell it. With the help of some people on this site I solved the problem and added Mcarbo optic mount with Romeo 5 and now it’s the most fun shooter I have.And I have quite a bit. LOL
Your problem is fixable in a few minutes and then the fun can begin.

So basically I have to use the dowel, forcefully push back the hammer so the bolt is able to slide all the way back, so I can get that 1.5 in movement after I put in the charging handle? Have you seen that 47-second video I’m talking about? It looks like the safety is removed, and he lifts up the hammer, then pushes it back with the dowel. My problem is, I’m not about to dink around and take off the safety pin. In that 47 second video, it looks like a piece of cake doing it. But without that upward leverage to get the hammer started, it’s impossible to push that thing back it seems 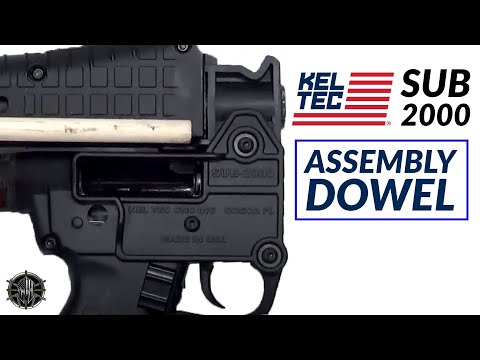 If the hammer and bolt did not have an interference fit, how would the hammer be cocked by the cycling action of the bolt?

So, if the trigger has been pulled, you need to reset the hammer. When the hammer is in the reset position - there is still hammer to bolt contact. You MUST push the bolt past the spring pressure which is locking the hammer against the seer. You can get this force 3 ways. 1. point muzzle down and drop bolt in from the back of the bolt tube - gravity is plenty, or 2. insert the charge handle and grab it to slide the bolt across the hammer, or 3. reach in (finger through ejection port or dowel inserted when folded) and hold the hammer down while the bolt slides past. If your hammer is cocked, as it should be, any of these techniques solves your problem. Technique 3 is the only way to do it without hammer/bolt contact.

I’ll have to try that when I got a chance. Not able to right now. It was late last night, and I didn’t want to be worrying too much about it. However, I did try the gravity trick, but that didn’t seem to work. I don’t want to bang it, but I might need to insert the bolt, and hammer it in until the hammer is released, so I can move it back the required length to be able to put it back together at the end of the butt stock. Still, this seems to be quite a major flaw in the design of this gun

@Stevo777 That video is not your solution. Follow instructions from Dred and problem is solved. It really is a simple fix.

Okay, but isn’t that what’s happening? I can’t get that bolt to move at all, unless I force it. So I should really force it forward, and push that hammer back? If that’s the case, I will try it this evening. Maybe I’ll even send a picture to what I’m looking at. I could even do it via email if that would work. Anyways, I’m at work, so I can’t do anything about it right now. Thanks for the help so far. I really want to get this issue fixed. The sooner the better.

That’s so much for your help. I’ll try this when I get home from work. How much force is needed though? I tried gravity and that wasn’t enough. I don’t want to exert an excessive amount of force, because I don’t want to wreck anything. As long as I know that I can put quite a bit behind it, I’ll have more confidence in doing so.

@Stevo777 @Dred Your overthinking this. Anyone of Dred’s 3 solutions will fix it.Best if you wait till you go home,use the fix described with some force and report back your success . Then enjoy shooting.
If you want you can send a clear picture first and someone here will help you.

@Stevo777 FWIW, the first time I took my S2K apart I couldn’t get the bolt to go into the full forward position. The safety was “ON” and the hammer was never released by the trigger. I consider myself as being pretty mechanically inclined and felt like a doofus. I can usually get something back together after taking it apart. Put the barrel pointing 90 degrees toward the ground and dropped the bolt using the “gravity” method and the bolt slid into place. I’d be a little concerned of using excessive force. Trust me the gravity method works.