@Moosecall What a damn Nightmare’

The alcohol smugglers during 1930’s will reverse their route. If there’s a market people will sell it, just ask the US DEA ! Summers coming

@DirtSalior
And that is absolute.
You can’t stop, what can’t be stopped… 100% anyway.
And most likely there is no yardstick to measure by, so it’s a guess that the joint effort will be successful.

The U S Nightmare starts Thursday!!!

Friends I wish you all the best.

Hoping you fair better than us.

BTW txs for the update, I didn’t know!

The Justice Department, within 30 days, will issue a proposed rule to help stop the proliferation of so-called ghost guns by requiring serial numbers and background checks for their purchase.

The Justice Department, within 60 days, will issue a proposed rule to make clear when a device marketed as a stabilizing brace effectively turns a pistol into a short-barreled rifle subject to the requirements of the National Firearms Act. Such modifications will require the more extensive NFA background check and payment of the $200 fee.

The Justice Department, within 60 days, will publish model “red flag” legislation for states that would allow authorities ex parte to seize firearms from persons deemed a threat to themselves or others.

The President will nominate David Chipman, a proponent of stronger gun laws and senior policy advisor to the Giffords gun control organization, to serve as Director of the Bureau of Alcohol, Tobacco, and Firearms. He has testified in favor of banning so-called assault weapons and requiring NFA registration of existing assault firearms. He also supports magazine capacity limits and more extensive regulation of several other semi-automatic firearms.

And about that “Epidemic” of gun violence see: joefridaysays.com/Epidemic.html

@JoeFridaySays
Yes, the next 60 days should be interesting times.
Read the link, unfortunately, IMHO, as clear as they are “rationalized” this doesn’t appear to have much to do with a “numbers” ruling.

We have an epidemic but it ain’t firearms. It’s a mental health epidemic and moron politicians who seem to think penalizing law abiding citizens will solve their perceived firearm issue. Golf Foxtrot Yankee Cujoe.

We really need to bring back state run residential mental facilities. They were largely closed due to the doctors assurance that most can be controlled with drugs and for various reasons that has proven false. It isn’t doing them or us any good being out in public.The homeless situation is caused to a great degree by people who really need to be in a residential mental institution. A woman with 2 children right down the road from me shot a guy breaking into her house at night. Turned out he was just scared because he was lost. He was on meds and living with family. They thought he was well enough to allow the use of the car. Lots of our problems could be improved if we went back to that. This is one of those issues like many that politically there is a lot of fault to spread around.

Cigarette smuggling into Canada is a very current issue. Taxes in Canada are so high its very profitable.

Reinforces the end result, things are being smuggled across borders.

Hopefully the new task team is more than somewhat effective.

The countdown has started.
Perhaps we need to change the title of this post to the Canadian & US Nightmare.
Time will tell.

WE THE PEOPLE… are a tyrannical governments nightmare.

Not on my watch.

The countdown has started.
Perhaps we need to change the title of this post to the Canadian & US Nightmare .
Time will tell.

More just arrived from the CCFR.
I quote, IMHO… How it’s been spoken: “If you repeat it, if you say it louder, if that is your talking point, people will totally believe it” (Cathern McKenna, Minister of Infrastructure and Communities Liberal)

Here are this weeks highlights, quoted from the CCFR website:

The federal Liberals have said cities could ban handguns in their as yet unpassed Bill C-21 – the gun-control law proposed in the wake of last year’s mass killings in Nova Scotia. While British Columbia’s two largest cities have said they’d bring in a ban to curb gun violence, that kind of uptake hasn’t been obvious here.
“I think we have to look at it, but I just don’t know that we’re anywhere near a point yet where as a city we would be able to debate it until we get more information,” Halifax Mayor Mike Savage said in a recent interview.
Mental health issues and poverty are among the root causes of crime prevalent in Halifax, Savage said.
“We have a lot of work to do on the root causes of crime and we know that things like poverty and a lack of opportunity (can lead to crime) – we know that where you grow up, even where you go to school all has an impact on later criminal activity,” he said.

Prince Edward Island is getting $1.55 million over three years as its share of federal funding meant to reduce gun and gang violence across Canada.
The amount was announced at a virtual news conference Thursday.
“Illicit firearms and organized crime are very real threats to the personal security of law-abiding citizens,” Charlottetown MP Sean Casey said in a statement about the funding. “No corner of our country is immune from these threats, including our beloved Prince Edward Island.”
Casey said during the news conference that federal officials believe the province is best positioned to determine the way the money from the five-year $327.6-million federal Gun and Gang Violence Action Fund should be spent.

A multi-jurisdictional investigation into an organized crime group allegedly involving outlaw motorcycle clubs in Ontario has resulted in dozens of arrests on hundreds of charges as well as the seizure of an arsenal of firearms and more than $1 million in drugs.
Durham Regional Police say the six-month probe dubbed Project KAKIA was led by their Gun and Gang Enforcement Unit, but it was conducted in partnership with the RCMP Transnational Serious and Organized Crime Unit, the Canada Border Services Agency, OPP and police services in Peterborough, Toronto and Belleville.
Officers also seized about $1.2 million in drugs and 32 firearms — five shotguns, 15 rifles and 12 handguns — during the investigation into criminal networks that allegedly involved members of the Hells Angels Motorcycle Club from the Brooklin and Belleville charters, as well as the Red Devils Motorcycle Club.

A 23-year-old Edmonton man is facing a number of charges after a month-long firearms and fraud investigation, police said in a news release on Monday.
Police began investigating a suspect after several attempted illegal firearm purchases throughout the province. According to police, the man was attempting to use another person’s Possession and Acquisition Licence in order to purchase restricted weapons from legal gun owners across Alberta.

A Regina male is facing numerous firearms charges as a result of investigation and subsequent enforcement on Thursday, April 8, 2021. The investigation and enforcement activity included members of the Online Stolen Property Unit, Patrol and the Special Weapons and Tactics Team (SWAT).
Through investigation, police learned of a male who was manufacturing firearms in a residence in the Mount Royal area of the city. On April 8, 2021, search warrants were executed on the residence, a detached garage, camper, vehicle and a utility trailer. The suspect was located exiting the garage and was taken into custody by members of the SWAT team.
During the search, officers located more than 90 firearm parts and at least two fully-functioning firearms, which had been manufactured. Other tools believed to have been used in manufacturing the firearms were also located along with instructions for firearm manufacturing.

UPDATE: 2021-05-04
Copied from the CCFR (Canadian Coalition for Firearm Rights).

Today, presenting a glimpse of one possible future, see below…

WARNING: Some viewers may find this footage disturbing 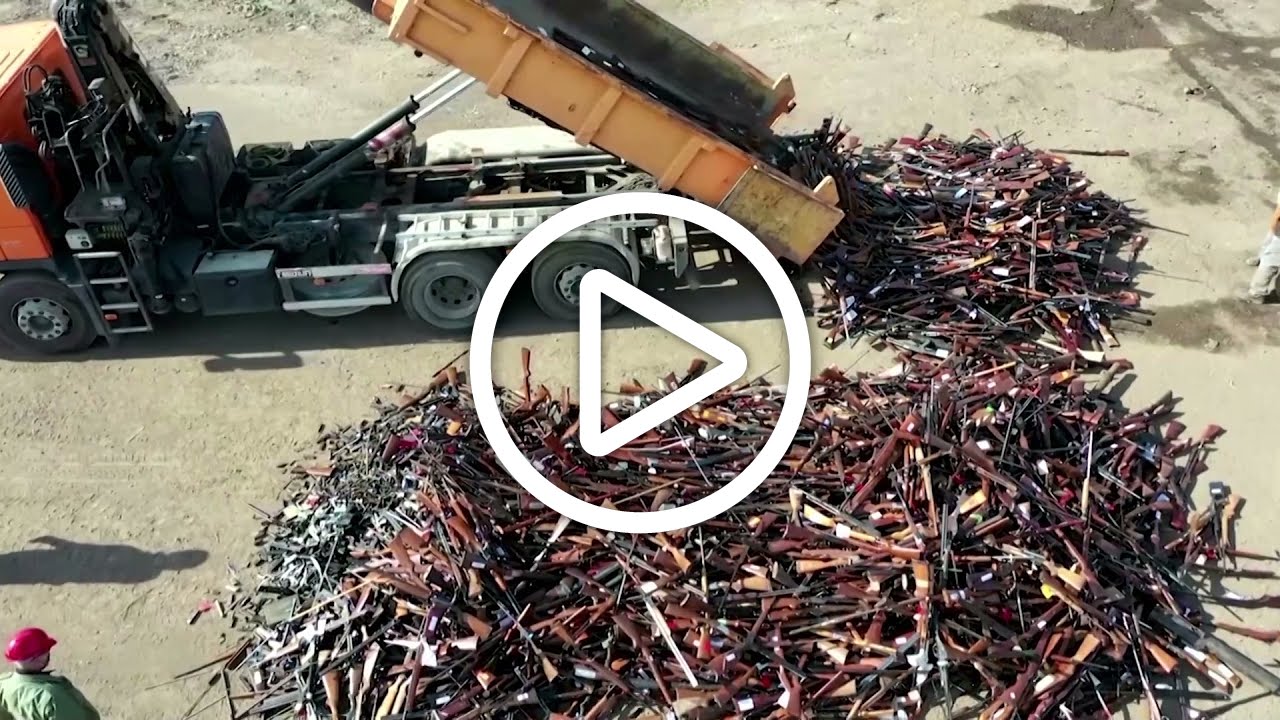 Belgian authorities this week turned a massive stockpile of firearms into 60 tons of molten recycled steel. About half of the guns were collected from across the country, principally handed in by owners, some of whom had inherited but not wanted to keep them.

Police in New Zealand say their latest gun buyback is meeting targets with the number of firearms that have been handed in.

The amnesty period runs for another three months - until August - but the buyback ends tomorrow.

Deputy commissioner Jevon McSkimming said police did not know exactly how many prohibited guns there were in circulation, but the numbers handed in had met their estimates. About 1500 people were identified as possibly having prohibited guns. Just over 600 have been handed in, including 152 pistol carbine conversions, and about 1700 parts. McSkimming said gun owners had been ready and willing to hand in their guns during the buyback process with no animosity from the firearms owner community over the amnesty and buyback.

“VeraCity: The Gun Chase is a CityTV original documentary by reporter Cristina Howorun that investigates Toronto’s rise in gun crime and how illegal firearms are making their way onto the streets, as well as the devastating impact they are having on those the violence leaves behind.”