Can you ID this please?

Found in the dirt at the range today. Not anything I can recognize. Common? 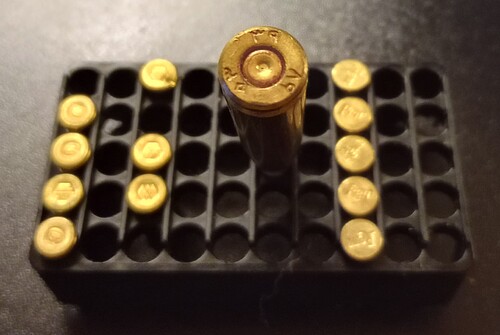 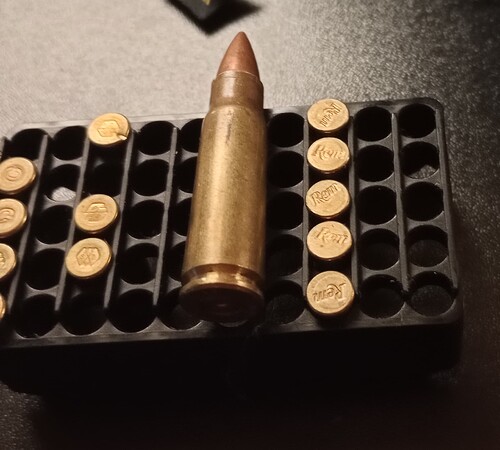 Is the bullet pushed further down into the casing than it should be?
Is that a groove around the bullet at the top of the casing?

Is one or both just an illusion of perspective angle?

Yes, looks like the bullet is deeper than normal - also no “shoulder” showing

I don’t see a groove on the bullet - looks like a scratch on the top of the casing from being crimped?

That’s what I thought but wasn’t sure.

And the crimp also makes sense.

So that makes me wonder what is “a rimless bottlenecked intermediate rifle cartridge developed in Nazi Germany prior to and during World War II, specifically intended for development of the Sturmgewehr 44” doing at my range? Besides spitting out light primer strikes.

https://en.wikipedia.org/wiki/StG_44
from wiki on google

I see two pictures of centerfire cartridges resting on what appear to be a partial box of rimfire.

First pic shows base/headstamp of what appears to be a fired round - primer appears to have been struck.

Second pic appears to be an unfired cartridge suffering from very, very severe bullet set back.

Does the round with setback have the same headstamp as the fired round? Did you pick these up on the range? Can you pull the bullet and hit it with a scale and some calipers?

Yes, looks like the primer was struck. The round was on the ground with the bullet unfired - caught my eye. No others nearby. Didn’t look very hard though. And yes, it looked like it was seated different from “normal” rounds.

I don’t have a good way to pull the bullet but I did try to measure it. Shows 7.3mm as close to the case as I can get. The od of the case at the top is 8.3mm. From the base of the case to the bottom of the neck (? correct term idk?) is 33mm.

Maybe not as rare as I first thought but who has a StG 44 laying around?

GSG STG-44 Rifle -Own a piece of german WW2 history. Made available by German Sports Guns. Chambered 22 long rifle. Comes in WW2 period style box. Never before availabe in US. Manufactured as close as original specs as possible. Real wooden furnishings. Available in 10 and 25 round.

And the 10 round mage makes it Cali compatible?

Good question. Couldn’t find the other one in 7.92X33 Kurtz, but they’re out there.