It pains me to post this and I’m still mad as hell about but I feel I need to warn everyone about Aero Precision. I thought they were a decent and reputable company but no more. That upper/lower set with the flaw in the lower? I sent them an email with the pic 8 days ago and never got any response. So I called them yesterday afternoon. Had to wait on hold nearly 15 minutes for ‘customer service’. When I finally got someone and explained what was going on she quickly informed me that since I did not purchase the set directly from them they would do absolutely nothing to make it right. Well, I’m done with AP…

@SnuffySmiff That is one of the reasons I try and buy my firearms, parts, and components from a small family owned gun shop near me. I may pay a little more… but I have their cell phone number if I have an issue. They respond 7 days a week.
Try and get a cell phone number from a big-box retailer or online business… it ain’t gonna happen.

I haven’t had such issues with manufacturers from TX or FL. just saying.

I bought the set from Proven Outfitters-formerly Quantico Tactical-out of Aberdeen NC. I contacted them first about the problem and they directed me to AP. And of course, AP says to contact PO which I did right after AP pulled their bullchit. Left a message but I know it was near closing so no return call Also called my FFL guy and left a message Will be on the phone first thing Monday morning-starting with my bank. We’ll see how it goes from there…

@SnuffySmiff Sorry to hear. On the flip side of the coin, I’ve bought a ton of stuff direct from Aero Precision and an absolute MEGATON of stuff from Proven Outfitters, no issues. Proven Outfitters LE pricing is practically unbeatable.

@SnuffySmiff I guess I missed it, but what was the issue with the upper/lower? 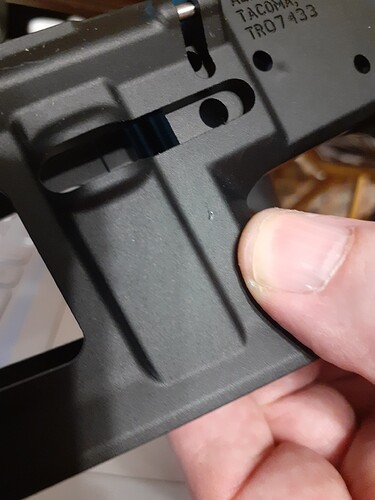 Yep. I paid full price for an un-blemished set. AP was selling blemished sets a couple months ago for considerably less $$. I understand manufacturing flaws and mistakes but this should have been marked as blemished before packaging…

A flaw? More like a beauty mark. Does it affect the function of the gun? With all due respect, I think you’re overreacting. How would have them make it right?

How would have them make it right?

Discounted price. It should have been sold as a blemish. I don’t think he’s overreacting at all.

should have been sold as a blemish

But Aero missed it when they shipped to the seller.

The seller missed it when they received it from Aero.

The seller missed it or damaged it when they sent it to @SnuffySmiff .

And Snuffy missed it when he inspected at his FFL.

Best I can figure, he installed his Lower Parts Kit before he noticed.

So, had Snuffy found it on inspection at his FFL, it was on the seller to make right. No way I expect AP to pay for a blemish that wasn’t discovered by three unique sets of hands, and ultimately, wasn’t discovered until after Snuffy took tools to the lower.

Am I the only person here that has called a seller and renegotiated before accepting and submitting my background check?

Am I the only person here that has called a seller and renegotiated before accepting and submitting my background check?

Me personally, I beat the crap out of my guns and haven’t had a situation where I saw a blemish and wanted to negotiate it. I’m gonna do far worse to it myself. Lol, The thought of haggling to make it right, to me the juice ain’t worth the squeeze. I fully support @SnuffySmiff spending his time and money how he sees fit though.

And Snuffy missed it when he inspected at his FFL.

Best I can figure, he installed his Lower Parts Kit before he noticed.

That’s a no on both counts. Still awaiting a return call from the vendor but my FFL guy has already offered to take it off my hands @ my cost. (yep, he’s a real standup dude!) I’m gonna start buying everything thru him may as suggested by TexasEskimo

If I buy a new firearm from him he will credit me 100% of my purchase price of any firearm I bought from him in the past. Basically 100% a trade-in value.

…that probably will never happen. But, it’s nice to know.

Well now I really feel like a clutz putting my stuff together. I put about 100 marks that size in my lower on assembly, but I’m all right with it because then I know it’s mine.

Some people call that “patina” and charge more for s#!t, just for perspective…

I’m with @Kona, my guns get beat up, they aren’t beauty queens, they’re tools. Admittedly, i do have a few collectables I don’t modify or use much outside of a range or as sidearms to fancy banquets and such.
That said, @SnuffySmiff paid for an unblemished piece so he should have received that.