Bidens State Department has just issued a ban on the importation of Russian fire arms and ammunition. Say good bye to cheap 7.62X39 steel case Russian ammunition. Maybe the Taliban will sell us their surplus 7.62x39 as they are now in the process of changing calibers. Dementia at its best.

Thanks for the heads up!
Just ordered 20 boxes 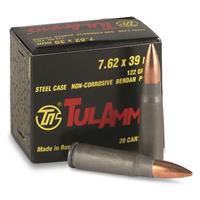 Cabela’s has had Tulammo 7.62x39 on their shelves for months in boxes of 20. If I remember correctly the price was under $10.
The latest ban on Russian Firearms will not change much as it will just about be what’s been in effect right now. The ban on Ammo will be a much different story. If anyone thinks the current ammo prices are high just wait until you can no longer purchase Russian manufactured ammunition. It’s got to be a very large percentage of ammunition purchased by US customers.

Yep, and the $12-$15/box of Norma will be next to disappear from the online stores.

All the more reason to make certain Biden’s reign of terror ends with the mid-terms next year. With a Republican House and/or Senate Biden will be lobotomised!

It’s time the U.S. manufacturers of ammunition and firearms step up so we have zero reliance on foreign products.

There will now be an opportunity for U.S. based manufacturers, both large and small, to fill the void of the Russian crap ammo.

And domestic firearms makers need to start competing… an example being Turkish shotgun manufacturers pretty much being the largest player. All of this in case there is an all out foreign based ban on firearms and ammo.

Made in USA means more than jobs, it means market stability and higher quality.

Having U.S. manufacturers of ammunition and firearms step up so we have zero reliance on foreign products didn’t work very well in our oil and energy related needs. Didn’t Biden just beg OPEC to increase oil production? The price per gallon of gasoline has risen 40% since Biden was elected or hadn’t you noticed? The manufacturer’s also had since 2008 when ammo first became scarce to step up and meet our ammo needs. Thirteen years later there’s still and ammo shortage. Besides I’d like to have $5 for every firearm in this country that has been made in a foreign country.
I’ve also used a bunch of Russian made ammo and have been pleasantly surprised. There are many Americans who will miss the low priced Russian ammo while waiting for US manufacturers to fill the void.

@kygman You just completly validated my entire post. Thank you.

The definition of Insanity is doing the same thing over and over but expecting a different outcome.
Why will anything be different this time?

This country can’t wait until the Mid Terms to replace Dementia Man. Look at the damage he’s done in 7 months.

The definition of Insanity is doing the same thing over and over but expecting a different outcome.

Once again… thank you for agreeing with me.

@TexasEskimo not trying to be argumentative but you still haven’t told us why things in the future will be different then the past. I don’t know about you but I can’t ever remember when our Great Country was ever in this bad shape. Energy, Southern Border Crisis, America’s Crime Wave, Afghanistan, Covid 19, Inflation, Unemployment, 3.5 Million Dollar Infrastructure Bill. Anyone think of anything else?
If you think Biden is bad, wait until you see Chlamydia Harris in action

Just wanted to repeat this so we all read it twice.

you still haven’t told us why things in the future will be different then the past.

Because we live in the GREATEST country on the planet. We Americans have been through a lot and since we are intelligent as well as courageous fighters we will always persevere. Always. Period.

Not on my watch.

Gary we will all get through this brother if we stay optimistic, focused, and relentless.

Brian, I agree with you whole heartedly and hope you are right.There are plenty of Patriots in this Great Country besides us. It’s just that I’ve never seen this country decline so much in just 7 months. Still can’t believe Dementia Man received 85 million votes. Its sad to see anyone with this dreaded disease especially our President . His Presidency is teetering right on the verge of collapse. Something is wrong when a President of the greatest country in the world doesn’t have the mental acuity to do the job. It’s time to envoke the 25th Amendment.

I seen where it said 40% of ammo bought in america is foreign ammo russia being where majority of that 40% comes from. There is a couple american manufacturers making cheaper steel case ammo now. So there just gonna have to grow there facilities and hire more american workers and get to work to keep up with demand. The libs want to price us out of shooting like they tryed with cigarettes. Keep adding little taxes and stipulations until the average cant afford to buy. There is alot of good brass ammo coming from russia and other foreign countries to that i hate to loose access to. But it is what it is. I do enjoy my old russian firearms as well. I wonder if they will start wanting to ban ammo from all foreign countries which would really kill the market.

All they probably do is send the ammo to say the Ukraine or some other country & repackage it made in the Ukraine !

@HandyDave I to have read on line that approximately 40% of all ammo sold in the US is Russian manufactured. Can’t imagine what the loss of 40% of our available ammo will do to our prices. If anyone thinks prices are high now just hang on.

Everyday Dementia Joe leads this country it only gives him more time to F**K things up. Impeachment proceedings need to start now. Aren’t Adults assigned to watch him?

The child sniffer knows they can’t ban guns, so they go for what’s next, ammo. Been saying this for years. They will make it so hard to manufacture/import it basically makes all guns useless. This Russian import ban is just the start.