Any Reloaders Out There?

Yes they are. Thanks for the info. Looks like 4.8-4.9gns is a good starting point.

@Ironbutt70 That is what I was thinking too. What COL will you be using?

Have a trawl through here some are old data but still worth a look. click on the blue writing below.

A Collection of Reloading Data - Old and Current

Gentlemen, I have a collection of reloading bookmarks encompassing a wide variety of handgun load data, both new and old. Everybody here has a similar database, I'm sure. We see a fair number of posts, asking for load data, so I thought I'd post...

Or a simple one is email RMR and ask, I emailed a different company (ARMA FORCE) as i couldn’t find data on Copper jacketed (LOS), and they replied.

I now load those to middle lead load data for the same weight.

Have a trawl through here some are old data but still worth a look. click on the blue writing below.

Great Link! http://www.natoreloading.com/ was my favorite.

Use our custom load calculator and find out how much more bang for your bucks you can get with reloading. Try it now.

From a cost standpoint, I have paid back my initial investment in addition to enjoyment and usage.

Thanks for all the replies/ links gang.

Did end up shooting rmr a email. Basically said, western powders has some load data for the 124g mpr. I searched and didn’t find anything. Also sad to do plunk test. And their bullets are shorter but the ogive is further up then anyone else’s, so seating depth will be lower then most, hence the plunk and twist test.

Said same thing I thought, pick one close to the rmr mpr reduce a bit and work up.

Now I need to start on 6.5cm. Local range will allow a chrono, as long as they are not busy. Guess other’s have shot people’s chrono

Don’t get hooked up on it being RMR MPR or any other brand its a JHP simple as that. Load a couple at different lengths with no primer in them to test feeding, also when you select the powder you will use ensure its not below or above Min /Max COAL that it says.
RMR website some people have commented and provided their data ( I recommend reloading books or powder manufacturers info)

here’s a vid of some one talking about them 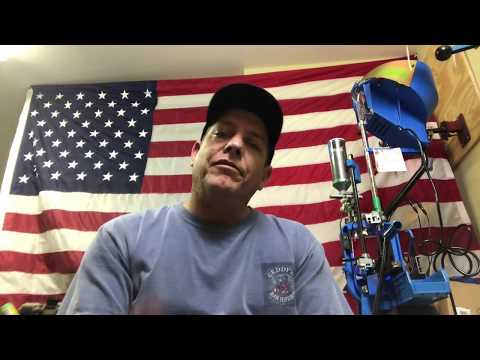 @John025 Thanks for the info and digging around for it too. For all the searching I did I just could not find info. Thanks again!

Not set on the RMR’s mpr’s. I have to do a lot of needle work to them. Lots of “polishing” media stuck into the cavity. Actually that was probably the only time I’ll ever buy from rmr, took around 6 to 7 months or so to get the bullets, and was told they used the copper to which I already paid for on more important bullets. Kept getting the run around when I’d email them. Anyways.

Thanks again for the help!

Got 200 9mm cases primed, will whip up some load cards and get started on it. After that I’ll start up on the 6.5 creedmoor. That one is making me excited.

Has anyone played with lighter bullets then 130g in 6.5cm, if so what was the outcome?

So I’m wondering if I should dip into the lighter stuff?

I had a banged up prime 130 from a miss feed and pulled it today. The powder was all sticky and clumpy. Wish I took a pic. Never got wet and moisture was less then 15%. Maybe bad powder?

Enough of my rambling lol.

Factory ammo from different manufacturers varies on powder type and even amount.
You could if you wish pull the 130’s and throw the powder away and reload the cases and heads with something else. Bit extreme but its an option, or if i were you take it back and swap for something else, Could be a faulty batch and the last thing you need is a misfired round sticking in the barrel it will be very dangerous if you miss it and fire again, not to mention its possible for hang fires, whilst rare do happen.