You probably answered this already but what was the rest you were shooting from? Bipod or bag?with that setup at the very least 1moa or tighter would be good which would be 1" at 100yds. Also a decent trigger would help alot but not necessary.

You probably answered this already but what was the rest you were shooting from? Bipod or bag?with that setup at the very least 1moa or tighter would be good which would be 1" at 100yds. Also a decent trigger would help alot but not necessary.

Shooting from bags…See picture above…
thanks

Brother,
I think you are on the right track to get the most out of the rifle. There are a few “tuning” subtleties that can further refine how an AR will shoot. John Kreiger demonstrated to me how things like muzzle break torque and gas block attachment can affect accuracy. Little things like gas tube alignment (misalignment) can add tension to a barrel when it is in battery. It is very easy to take a high quality barrel and make it mediocre by not paying attention to the little things during the build. That being said, it’s amazing how well AR’s will shoot with mil-spec parts and barrels. Good Luck Brother.

you have a hell of an AR

Well … someone needs to tell the Interwebs. Radical Firearm ARs (assembled a few miles from my house) are widely regarded to be craptacular. I have yet to update the trigger (have had a Larue sitting in packaging for going on 4 years but mine are all still cheap parts kit triggers).

I have a normal profile barrel. I use an oring to keep my muzzle devices from unscrewing themselves.

It is and was a $500 AR plus a decent Vortex Strike Eagle 1-8. To be fair, Radical built it for my club to raffle; my step son won the raffle; I bought it from him 'cause he had returned to VA by the time we drew for the raffle. So, $500 is the Mil/Leo price 'cause Radical extends that discount to my MC.

@louie088 … I think that 1. you will have an AHA moment leading you to correct a deficiency in your build, or 2. Aero screwed the pooch on your barrel. As spec’d, you should get better performance.

We are not a LEO MC. But we support the community and our Local LEOs.

E.g. when a local department could not get funded for updated, top quality body armor - we were there. When I came in, my Chapter President was active LEO. My chapter is near 30 years old and in that time about 20 LE officers have prospected with the majority making full patch and several being promoted into the International Arena.

Our community knows us well. And, as a hang around, I recall being tapped to work with a handful of members paid to run security at a local honkey tonk that was being plagued by fighting miscreants. We controlled entry and squashed fights immediately.

I got lots of thanks from LEOs during that mission 'cause we were able to accomplish what they could not. And, in so doing, we freed them up to do real policing during the witching hours.

All that said, I actually believe we were extended the discount due to relationships built at a local watering hole. The member that delivered the relationship to the club is not LEO affiliated.

When we were infiltrated by Fed Investigators in the 80s … the undercover that gained membership identified himself to Int’l Leadership and asked to continue his membership. We never learned who, but the how, why and when are real. Of course … his membership was not terminated.

Appreciate your work with and support of LE. God knows we need it now. We were still popular when I retired, of course that ended a week later when Obama was sworn in.
I’ve been with the Blue Knights for over 40 yrs and though retired from the PD still stay active as the Pres of the Green Bay BK chapter and Wis state rep to the Great Lakes Regional Conference.

Twist rate has more to do with the bullet’s bearing surface than it does bullet weight.
Most 1-9 twist barrels will shoot 75gr & 77gr BTHP match bullets really well, but try a 73gr or 75gr AMax or ELD-M bullet and they will shoot like crap because the bearing surface is too long to be correctly stabilized by the twist rate of the barrel.

Velocity also has to do with it, but most 223/5.56 case’s don’t have the capacity to reach a speed that will work before you get high pressure.

Interesting for sure. Im probably gonna head to the range today and try some diferent ammo.
I have some Hornady 73 and 75gr to still try.
Really appreciate everyones input.

A buddy of mine offered to trade me a couple hundred .223 Sierra Matchking 69g federal in exchange for M885, M193 straight up…
Couldn’t pass that up. There’s even a box of some 75g 5.56 Hornady!
The only guns he has in that caliber are AR pistols, think he just felt bad about doing magdumps with $1.20 ammo

At 100yrds with correct elevation, expectations should be pretty high. At 500yrds on a Baker target you should be able to call it, head or chest, with iron sights. Every time. It’s an extremely underused caliber, just a little light.
…6.5mm makes me smile though

@SarSec
Hey, trying hard to stay on topic.
What is your takeaway on 7mm Rem MAG. accuracy at 100+ vs…223.
Generally speaking of course. I’m new at reloading and still on the learning curve in search still of an accurate load at 100-200 yards…

At 100yrds with correct elevation, expectations should be pretty high. At 500yrds on a Baker target you should be able to call it, head or chest, with iron sights. Every time.

A lot will depend one the shooter’s ability, the type / style of shooting position, the barrel twist rate versus the bullet weight, and the profile of the barrel.
Now, If you’re shooting a factory rifle, it is only going to shoot as good as it was built. Shooting a factory rifle MOA or better consistently is really asking a lot, but if you find a load combination that it likes, it can be accomplished.

Almost all of my rifles are either custom or have premium barrel’s on them as well as tuned trigger’s.
If they don’t shoot 1/2 MOA or better, then I get rid of the barrel.
I’ve got around a dozen rifles that will shoot groups in the 0.1" - 0.3" five shot groups at 100 yards in cartridges from 223 to 300 WM off a bench with a front rest and rear bag setup.
Do they do it every time? No, but it’s not the gun, it’s the idiot behind it that’s screwing up.

I do have a couple factory rifle’s that do shoot extremely well. An Old staggered feed Savage 12 FLVSS 223. The only changes to this rifle is a SSS Competition trigger and a LH Boyd’s stock that I modified for the factory varmint contour barrel.
Shooting my loads, this rifle has always shot well under MOA, usually about 1/2 MOA. 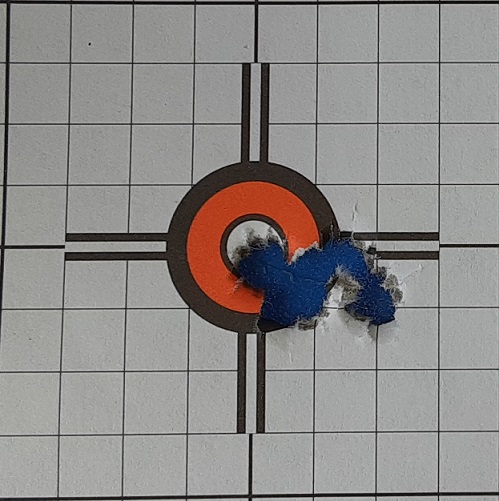 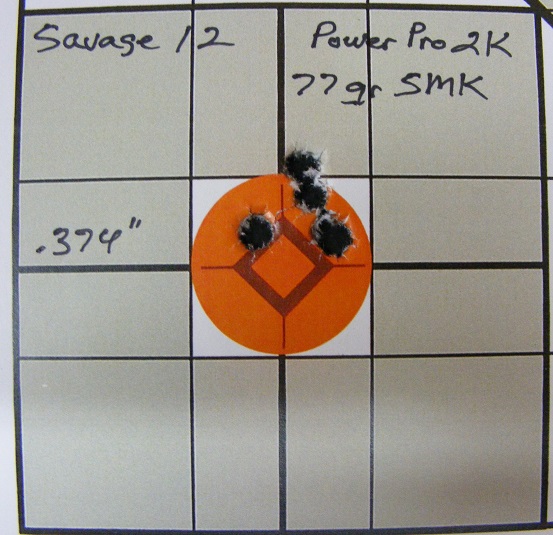 The other is my DPMS LR-260H in 260 Remington. It is mainly used for hunting pigs, and I mainly shoot a 140gr Sierra Game King bullet out of it, but it will stack them all day long.
10 shots at 100 yards- 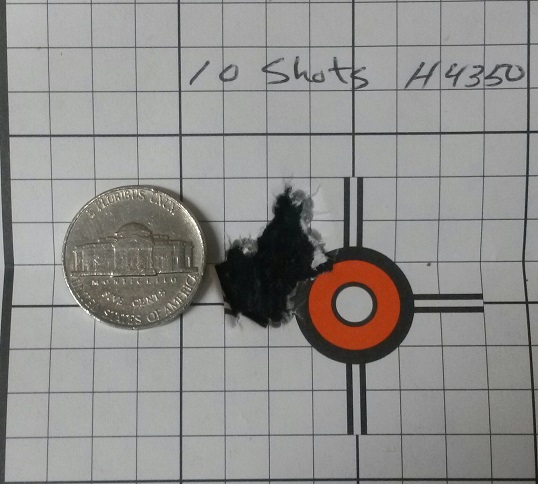 @Txhillbilly thanks for the pictures and information. The 10 shot group from the DPMS LR-260H is really impressive. Ive really learned alot in the past few weeks both from you guys as well as going to the range a good bit, trying diferent ammo etc. Im happy with my results so far and if they get better then thats awesome. I built this rifle myself, with some great parts and some regular parts like the Aero stuff.
Im getting consistant groups now. Always at 1 MOA. Guess thats whay I get from a $200 Aero Precision (Balistic Advantage) barrel. And Im no expert shooter. I just know I am getting consistant results for the most part. If it gets better than awesome if not, then I just built myself a nice 1 MOA rifle. Im going to keep working on fundamentals for now and enjoy myself.

@Concorde
Sir excellent shooting/grouping.
You might NOT want to join the friendly monthly shoot because think you have a more than good chance of winning. LOL
Joking of course, @Festus can fill in the details if you need them.
Cheers, and Welcome to the Forum.

When I bought my Sig Cross I tried about 10 different types of rounds and couldn’t group them any better than you did at 100 yards. Talk about frustrating! I bought a super accurate gun to reach out a lot longer than my AR and here I was at 3" groupings at just 100 yards?

Well after I put about 150 rounds through it, cleaned the gun 18 times, and just got it loosened up a bit she’s down to 1/2 MOA at 200 yards all day every day. And that’s with the cheapest .308 ammo I’ve found. Shooting about 4 times as good as match grade stuff when it was new.

It probably just needs to be run in some. The Sig has a break in procedure where I only shot it 5 rounds, cleaned the barrel of all brass filings that it was surprisingly full of, 10 more, clean, 5 more, clean, 10 more… You get the drill. It was a 30 round break in and even then it still didn’t shoot well until 150-ish rounds.

If you’re going for a precision rifle it won’t shoot perfect right out of the box. Cheaper guns? Sure because the tolerances are looser but high end stuff usually needs to be run in some.

Years ago I thought ‘barrel break in’ was just for bench rest-type guns. Nope! It truly does make a difference in most every firearm.